The barbell military press has lost the war! These 5 overhead lifts are superior options for building pain-free strength and size in your upper body.

No matter what type of overhead press you're performing, these form guidelines are essential to staying strong and safe:

Long before the bench press ruled the weight room, the true marker of upper-body strength was the overhead press. Why? Because if there's a weak link anywhere in the body, the overhead press quickly exposes it.

But therein lies the problem. Far too many people have slaved to hit big numbers with the barbell military press—100 pounds, bodyweight, 200 pounds, you name it—and seen their weak links erupt into full-blown injuries along the way. These are the guys you'll hear in the weight room telling jokes about how overhead pressing was invented by a shoulder surgeon with boat payments to meet.

Don't let them convince you! The overhead press as a movement is as valuable as ever. In fact, it can also act as the very tool you need to fix these weaknesses, eliminate muscular imbalances, and enhance postural mechanics. To reap its benefits, just put away the barbell and get to know these variations first! 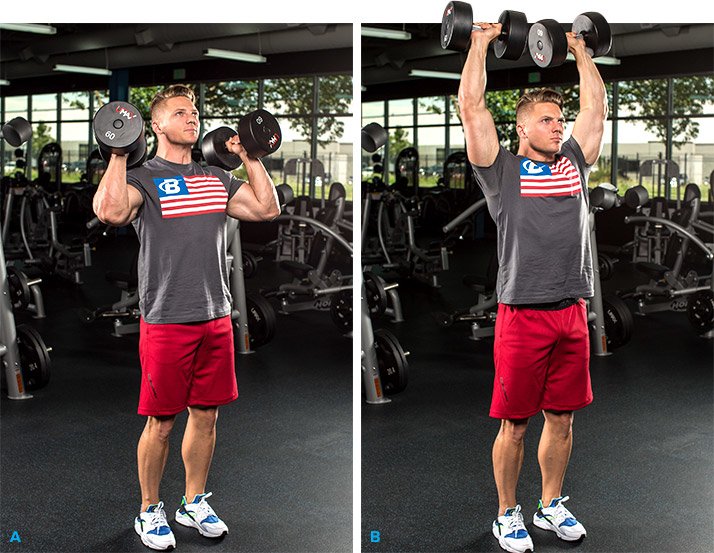 
The dumbbell military press has a reputation for being more user-friendly than the barbell press, but it's deceptively difficult. There's little room for cheating because the core musculature as well as all the stabilizers in your body must work overtime to lock the dumbbells into the correct position—particularly at the top.

The answer to mastering it? Slow it down and pause at the top for a few seconds to maximize the effectiveness of this classic yet highly difficult exercise. It won't be easy—in fact, it'll be very hard—but that's where you'll get the benefit!

Eccentric isometrics are such an effective training tool that I have my athletes and clients perform them often. I've found they elicit substantial improvements in force production, shoulder stability, and symmetry compared to traditional overhead lifts. Having to balance the weight overhead and control it on the descent provides greater sensory feedback. Your body is almost tricked into optimal movement mechanics! 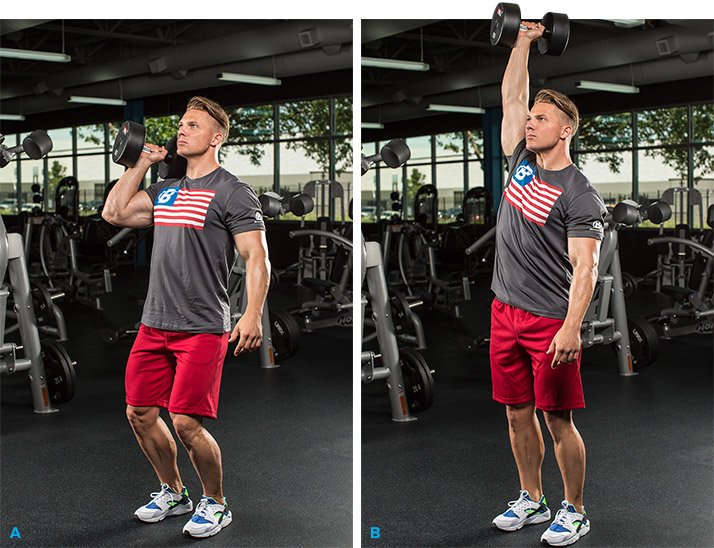 
Some will tell you that the push press is a cheating version of a strict press, but they're underselling the value of this move. By combining explosive leg drive, core stability, and upper-body strength, the push press effectively targets the entire body from head to toe. When performed as a unilateral movement, with each arm pressing individually, it adds the further benefit of stimulating the rotary stability muscles of the core.

What could make this great movement better? Stop me if you've heard this one already: Slowing down the eccentric portion of the lift!

Because the load should be greater than what you would typically handle under strict press conditions, performing these with a controlled negative will only enhance the growth-inducing benefits of this exercise. Think of these as heavy negatives for the shoulders, but instead of having a spotter help you lift the weight on the concentric phase, your legs assist you. 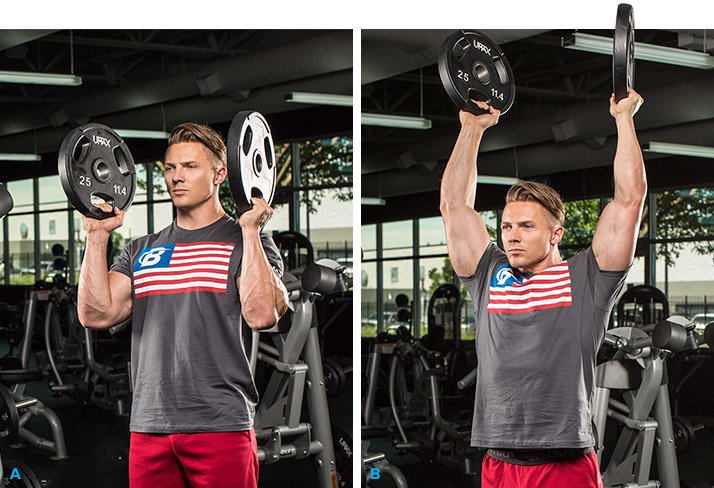 
If you've ever performed any type of bottoms-up press, you know immediately how difficult they are. But similar to eccentric isometric dumbbell lifts, they just seem to magically lock lifters into good press mechanics.

If you're unfamiliar with these incredibly challenging pressing variations, get ready for a seriously intense burn throughout your entire upper body. Just as with isometric eccentrics, you'll find that you have to generate incredible tension just to get light weights moving!

Single-arm versions are the place to start, because more of your neural drive can be focused to one side of your body. But once you're confident with your control of the weights, try performing them bilaterally—meaning you use both arms at the same time—which is typically more strenuous.

If you're looking for an added challenge, try these with iron-grip-style plates. Just be careful not to (literally) knock yourself out, as these are unusually difficult and one wrong move could spell disaster. 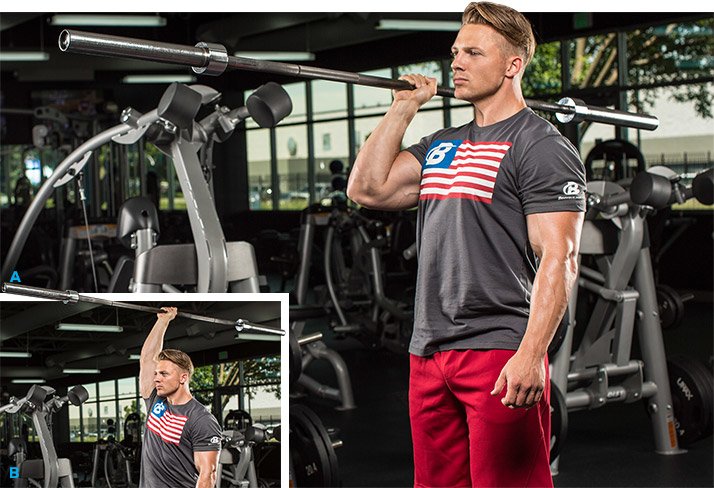 
This favorite of the old-time strongmen has gained recent popularity thanks to Pittsburgh Steelers linebacker James Harrison performing these on his Instagram feed.


So, how do you perform it? With your hand centered, grip the barbell, keep perfect posture, and drive the weight overhead. Few exercises require such a high degree of shoulder and grip stabilization while simultaneously challenging the entire musculature of the core. If that sounds eerily like what I said I like about the bottoms-up press, you're beginning to see what I look for in an overhead lift.

Also similar to the bottoms-up press, the double-arm variation is more difficult. However, given that it eliminates most of the rotary-stability challenge on your core, the learning curve might not be quite as steep. 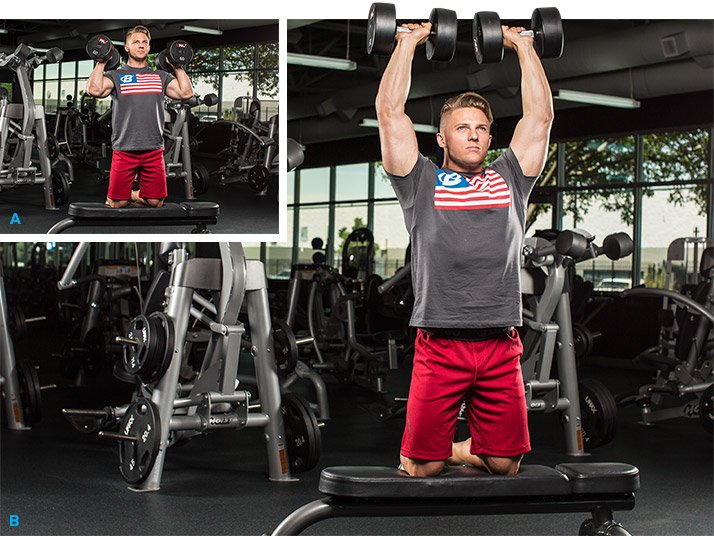 
Overhead presses are difficult enough; throw in a kneeling component on any variation and you've just raised the bar several notches. If you're capable, I recommend performing these on a bench rather than the floor. The fact that you can't anchor your feet for support exponentially increases the difficulty.

If you're hoping to find a variation of the overhead press that forces the lifter to have perfect mechanics, this is it. Every facet of form and technique must be dialed in to complete this successfully. There is little room for error, so if you're ready, grab a spotter and get to it.

Overhead Dumbbell Press while Kneeling on Bench
Watch the video - 1:53

This last variation's a bit crazy, so make sure you've become highly proficient at the other movements first. Essentially, all you're doing is combining the most intense variations listed above into one hardcore lift: a kneeling overhead press with bumper plates...with your eyes closed.

You'll be doing the bottoms-up variation with bumpers. Grip strength and shoulder stability have to be perfectly dialed in, since there's little to no room for error. The features of this lift include:

Why eyes closed? Besides eliminating visual distractions, this increases what is known as proprioception, or the sensory information your brain receives from your muscles about things like positioning and mechanics. Especially when performed with isometrics and slow eccentrics, closing your eyes exponentially enhances the activation of the surrounding musculature, ultimately leading to greater gains in strength and size.

I totally understand if you shy away from this last test, since it will require you to clear the surrounding area and look a little crazy, but it's well worth your time. Try it and you'll wonder why you ever bothered with barbells in the first place!