What's it take to build a pro-level midsection? Cellucor's Craig Capurso enumerates the 18 most-important rules when it comes to bringing out your abs.

Everyone, it seems, has an opinion on the best way to train abs. Whether it's doing bodyweight ab exercises for higher reps to keep the midsection tight and trim, or weighted moves for lower reps to build up the bricks of the six-pack, the differences are as diverse as the qualifications of the fitness professionals who espouse them.

They can't all be right, can they?

In my experience, there are a number of smart ways to approach your ab training, and others that don't seem to be as effective. Bodybuilding.com asked me to compile a list of the most important ones, which we're collectively calling "laws." Hopefully you can walk away with more than a few nuggets that'll enable you to train smarter on ab day.

If Your Abs Are Weak, Do Them at the Start of Your Workout

You have the most energy at the beginning of your workout. Wait till the end of the workout and you're a helluva lot more likely to walk away without training abs. Another method that works is to train abs between sets of a larger body part. Maybe not on your heaviest sets of legs, but later on in your workout, this strategy is effective because ab training isn't tremendously demanding on your respiratory or nervous system. 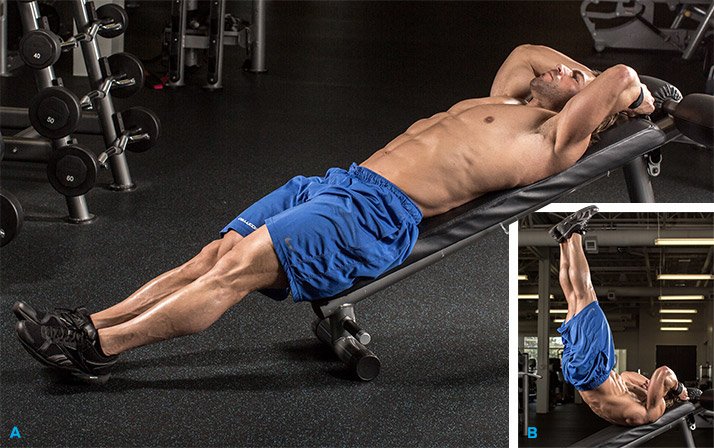 In my case, my core is already dominant just from years and years of training, so I train my abs last. Quite frankly, if I miss an ab workout, it's not going to change my life.

Heavy Lifting Is No Substitute for Direct Core Work

When you're doing heavy standing movements like deadlifts, bent-over rows, military presses, and Romanians, your core has to work overtime to maintain a safe spine position. Hence your core, which includes abs, is getting lots of work, even on non-ab days. However, your abs are contracting isometrically for the most part—that is, they're locking your spine in a safe position, but they're not shortening or stretching. Isometric ab training like this builds strength from that angle only, rather than over the entire range of motion.

Train Heavy to build your abs

Despite their greater percentage of slow-twitch muscle fibers, abs should still be trained in the 8-12-rep range. That's something I'd do to train for the cobblestone look that comes from a bulging six-pack. To work the inner ab wall that's not visible, I use static holds lasting 30-60 seconds.

Start with your toughest exercise

As you fatigue over the course of your workout, you can do movements that are slightly less challenging. If you follow a workout like mine, you can do the static holds (vacuums) last, or do them between sets of other muscle groups.

Train abs according to a plan

I have a pool of 5-6 ab exercises I can do at any given time. Through trial and error, I've found that these moves produce the best results. I don't need more variety than that to achieve my desired look. Depending on what's open at the gym, I'll do two moves with added resistance and another that's a static hold like a vacuum. In all, I think three exercises is plenty of direct work on ab day.

Learn the Difference Between Upper and Lower Abs

During a hanging leg raise, which better targets the lower portion of the rectus abdominis, it's just the opposite: Your upper body is stabilized and you raise your legs up, which curls your pelvis up. When training lower abs, you have to visualize the hip engaging in the opposite way than when you're doing a standing crunch for the upper abs. The key part of the movement is the hip hinge.

Use resistance for maximum results

Almost every ab movement I do is with added resistance. Resistance movements allow you to train in lower rep ranges, which better breaks down the muscle fibers. In my opinion, the biggest mistake people make when training abs is doing too many reps with no added weight, such as bodyweight exercises. You need resistance if you want to thicken up the six-pack and create that shadow on your midsection. 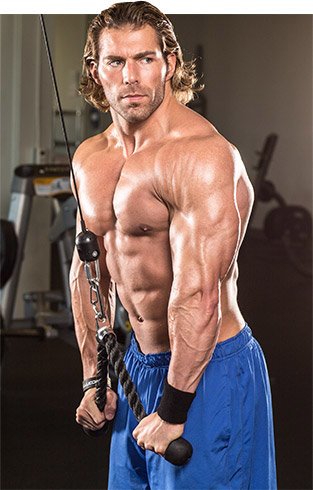 I'd say the most underrated exercise is the vacuum pose that works the transverse abdominis, a foundation muscle that's not visible. Think of a plank done standing, Frank Zane-style.

You suck your belly button in to the back of your spine, which helps increase the strength of that foundational wall. It's just pulling your abs in and holding it.

That's really about the mind-muscle connection. You can even consciously pull in your inner abdominal wall and try to actually squeeze it back to your spine as you complete almost any exercise.

For example, when I'm doing triceps press-downs, I'm holding that abdominal wall while I'm doing the movement. You can easily do vacuums between sets of larger muscle groups, but you should do them in addition to direct ab exercises.

Always Strive to Improve on
What You Did Before

Building in progression is just as important in ab training as with any other body part. Don't just do 3 sets of 15 reps over and over.

Strive to do more reps each workout; as you get stronger, increase the amount of resistance.

Give Your Abs Adequate Time to Recover

I don't think it's wise to do direct ab movements every single day because there's no time for recovery and growth. While the abs are a fairly small muscle group that recover quickly, I favor a three-times-a-week approach, or about every 48 hours. Remember, they're getting indirect stimulation through other exercises, so three direct ab workouts a week is a good starting place if they're a weak point. If they're not, I'd say just 1-2 times.

Hold Your Breath for a Stronger Contraction

Breathing is important when training abs—or any other muscle group. Holding your breath as you complete the concentric (contracting) motion maintains intra-abdominal pressure, which gives you a greater strength advantage than if you were to exhale while completing each rep. Exhale only toward the very end of the range of motion. Of course, inhale on the eccentric (ab-stretching) phase.

Cellucor: COR-Performance Whey
Deliver a pure protein that packs more protein, and better flavors, into each and every scoop. Go Now!
12

Learn to ignore the burn

Training your abs doesn't require any special mental imagery. Just suck it up! When shit burns, keep pushing! I don't care how much your friends are cheering you on, it's you versus you at that point. It's willpower.

Use Tabata to Make Your Workout Harder

I'm a Libra, so I don't like to leave any stone unturned. I don't just do 3 sets of 15-20 reps and move to the next exercise; I really want my abs to burn. I follow a Tabata protocol in which I do 20 seconds of work followed by 10 seconds of rest. I keep that up for four minutes, meaning I do eight work segments. 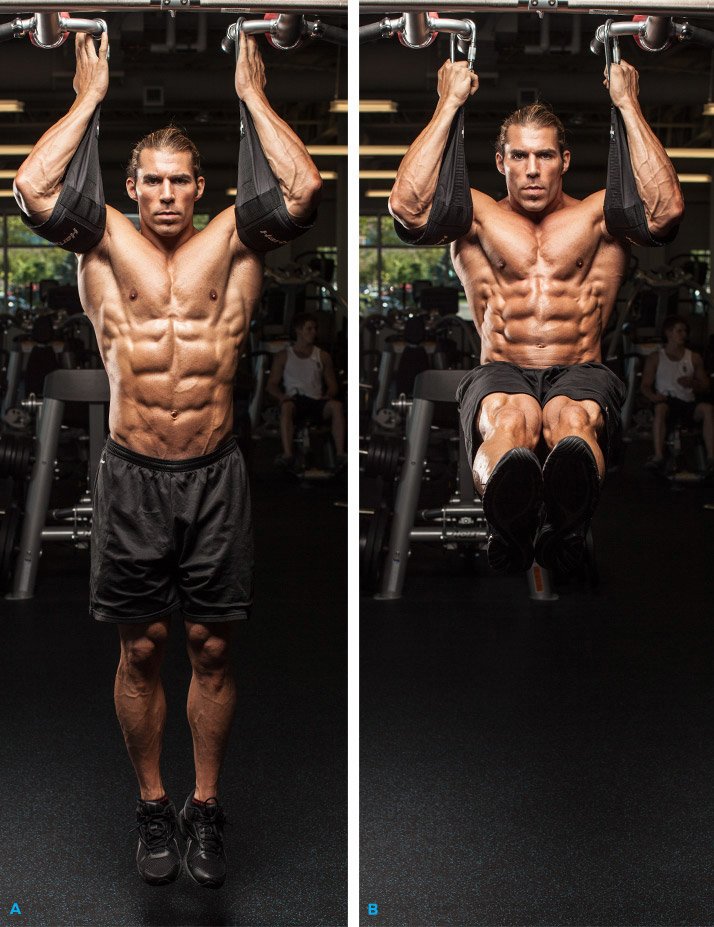 You need to make sure you've got the right resistance, because you need to be feeling it within 20 seconds; you'll probably reach about 8-12 reps within that time. You won't get that burn on the first few sets, but you will by the seventh or eighth. If your abs aren't burning, you're probably not training them right.

Use Cluster Sets as Needed

A cluster set works just as well as a Tabata set. It's going to allow you to push your abs to the limit, rest a bit, then hit them again. I do clusters, although I limit them to about a minute for abs, doing as many reps as possible with a given weight because I want to keep moving. I'll do a minute on and 30 seconds off instead of taking a couple minutes of rest between sets as I do for other body parts.

Don't Do Anything Stupid

Maintaining proper form will help you develop your abs more effectively and ward off injury.

You want to increase the stress on a muscle, not decrease it. Here are a few ways to make a movement more difficult: 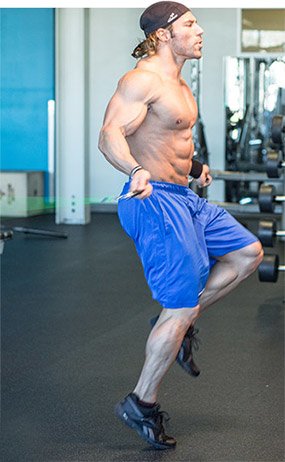 You can train abs every single day, 10 times a day, but if your diet looks like shit you're never going to see those abs. They may be there, but they're going to be hidden by fat.

I can get my abs to show without stepping on a single cardio machine. For most people who are looking to lower their body-fat levels, however, aerobic exercise can tip the balance so you're running a daily caloric deficit.

In terms of types of cardio, high-intensity interval training (HIIT) is superior because it enables you to burn far more total calories—both while you're working and up to 24 hours afterward—than steady-state cardio.

Tabata training is done similar to HIIT: 20 seconds on/10 seconds off. Whether you're doing weights or cardio, Tabata-style training can be an effective fat burner.

And we won't even get into the boredom factor of sitting on a machine for an hour.