No bodybuilder was as renowned as Arnold for his huge arms and massive delts. And no bodybuilder trained as hard. Here's his blueprint and workout for world-class upper-body development!

Few bodybuilders are made in the mold of Arnold Schwarzenegger. Sure, everyone wants to be the next Arnold, but who could conceivably duplicate the mind-numbing training volume and frequency he achieved? He didn't just train shoulders and arms for 60-plus sets—he did it 2-3 times a week with incredible intensity!

That's one reason "The Oak" stood out among his peers. Where others would call it quits, Arnold took pleasure in his own pain. While this kind of volume can't be sustained long-term, it certainly can flip your personal anabolic switch and help you dial in your ideal physique—provided you can learn to love a bone-crushing delt-and-arms workout.

Here's a blueprint of how Arnold trained these body parts!

Arnold trained shoulders with the same high-volume approach he employed with other body parts, ensuring that each deltoid head was targeted from different angles. Because multijoint presses from the front of the neck recruited the anterior (front) delts to a greater degree than behind-the-neck presses, he typically included both in his shoulder workout for maximal development.

"There's no one exercise that will work all three areas of the deltoids," Arnold once said. "Therefore, when you're planning your shoulder routine, you have to include the right variety of movements, so that you get full shoulder development."

His full-throttle approach occasionally meant that he did 50 or more sets in a single workout! Remember, too, that Arnold trained shoulders with arms at least twice per week—an impossibly challenging combination of volume and frequency that helped build the biggest delts the world had ever seen at the time.

Here are some of the basic principles Arnold followed when training shoulders:

Golden-age bodybuilders had to grit their way through their post-workout protein shakes. Yours can be the treat you earn after a hard workout!

Arnold's guns were his calling cards, and his mental visualization of his biceps as mountain peaks reflected his larger-than-life approach. Arnold frequently did up to 20 sets for biceps, split evenly between mass-builders and those he did for definition.

He commonly supersetted biceps and triceps movements, which served to flush his arms with blood. Combined with his high-volume approach, his shirt-sleeve-busting routine included movements that sought to isolate the three triceps heads, which he achieved by manipulating arm position.

Here are some of Arnold's best arm-training tips, culled from the many articles he wrote and interviews he gave over the years.

3
SUPERSET
Perform the exercises in order with no rest between exercises and 1 min. of rest between sets.
Alternating Dumbbell Curl
4 sets, 20-24 reps (alternating, 10-12 reps per side, no rest)

4
SUPERSET
Perform the exercises in order with no rest between exercises and 1 min. of rest between sets.
Alternating incline dumbbell biceps curl
4 sets, 20-24 reps (alternating, 10-12 reps per side, no rest)

5
SUPERSET
Perform the exercises in order with no rest between exercises and 2 min. of rest between sets.
Concentration curl
4 sets, 10-12 reps (left side, no rest)

6
Feet-elevated bench dip
Note: Arnold began with three 45-lb. plates across his lap. Each time he hit muscle failure, a plate was lifted off until he was using just his body weight.
1 set, 10 reps

Even an old-school arms workout works best with a cutting-edge pre-workout with the best pump and fatigue-fighting ingredients. 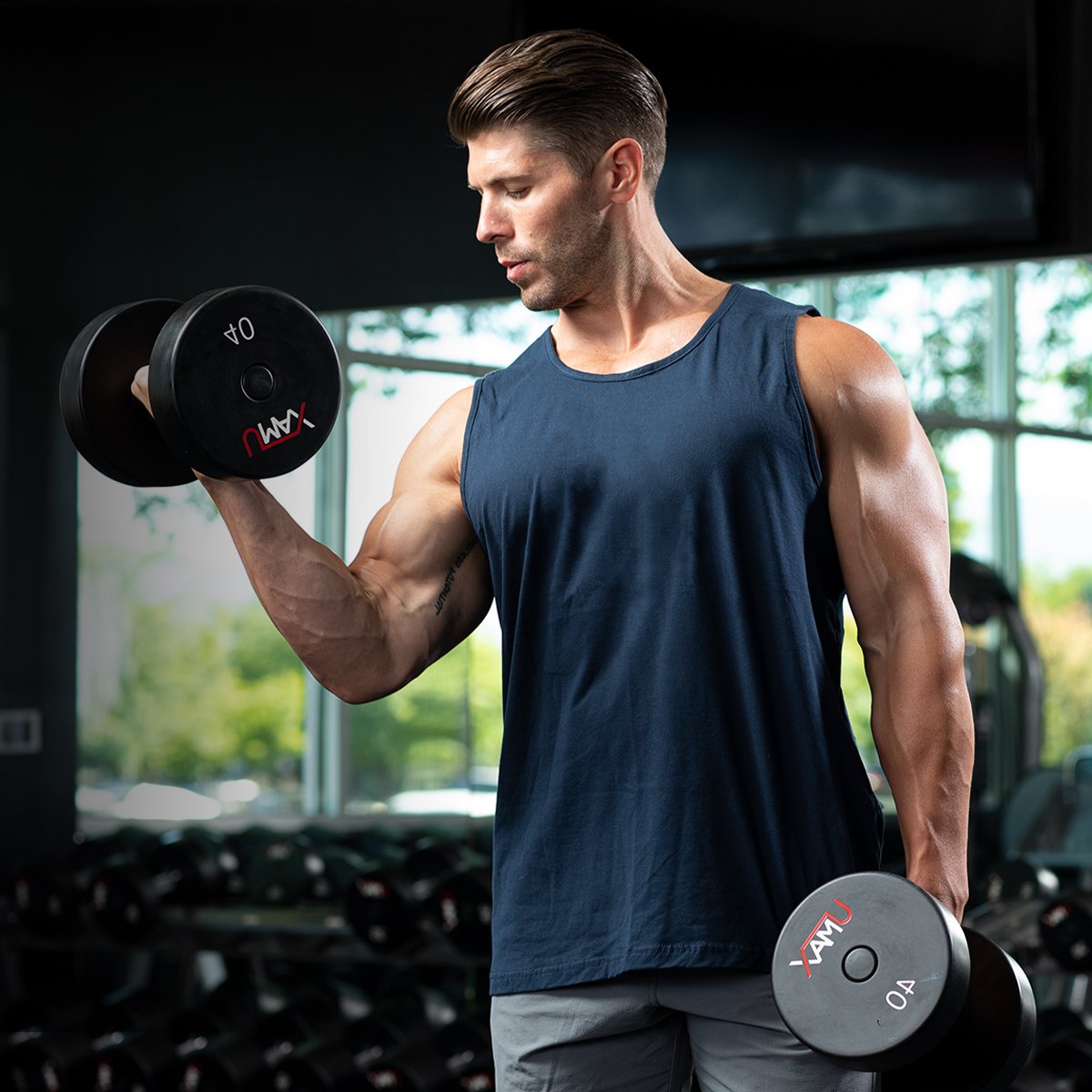 Old-School Training for Gains
The Blueprint to Mass is a classic high-volume plan for serious lifters. You'll hit chest and back, legs and abs, and shoulders and arms twice a week, eat big, and grow like crazy.