How Many Reps Should You Do?

Want to build size, strength, or endurance? Then you need to know how many reps to lift! Here's how to match your goals to the best rep range and weight.

Look around any gym, and you'll see people committing various training mistakes—a guy on the bench press bouncing the bar off his chest, someone doing curls with more motion in his hips than his biceps, another person pressing her flyes. These visual blunders can hamper your training progress, to be sure, but they're not the only thing you need to worry about. What about the mistakes you don't see?

None of those mistakes will undermine your training efforts as much as confusing hard training with smart training. Training hard is easy, but training smart gets you closer to your goals. For example, let's say you want to build muscle. You can choose a light weight and rep it 50-60 times, or grab a heavier weight and push it maybe 10 times. Both examples are hard, but one method is superior for building muscle.

Effort is important, but it has to be applied correctly. To optimize your effort in the gym, you need to understand which specific rep ranges can best help you reach your goals. Thankfully, researchers have already weighed in on the topic. Here are the basic rules of choosing the right reps per set for your fitness needs!

If you're training for muscle size, choose a weight at which you reach muscle failure in the 8-12-rep range. In other words, after your warm-up sets—which are never taken to failure—you should select a load with which you can complete at least 8 reps but not more than 12.

That means if you can do only 6-7 reps, the weight is too heavy, so reduce it on subsequent sets. It also means that if you can do more than 12 reps, but simply stop at 12, that's not a "true" set. A true set is one in which you fail—the point at which you can't do another rep with good form on your own—within the target rep range of 8-12. If you can easily do more than 12, add weight on your next set so that you're failing in the target range.

Choosing the right load for your muscle-building goal effectively targets the fast-twitch muscle fibers, which are more prone to growing bigger and stronger in response to resistance training, with enough volume to stimulate growth.

Of course, the guy who is bouncing the bar off his chest and the one who is using every lower-body muscle group to heave up a set of curls are using bad form. If you're exercising with poor form, the weight is probably too heavy, regardless of when you're failing. Learn and practice textbook technique.

Choosing the right load for your muscle-building goal effectively targets the fast-twitch muscle fibers, which are more prone to growing bigger and stronger in response to resistance training, with enough volume to stimulate growth. However, these fibers fatigue fairly quickly, which is why you can't lift a very heavy weight very many times.

Train like a bodybuilder: If you're looking to maximize muscle size, target 8-12 reps per set (on average) and choose multijoint movements like the bench press, squat, overhead press, bent-over row, and deadlift, which recruit more total muscle mass than single-joint moves, thus allowing you to lift heavier weights.

Hit a target muscle from multiple angles with high volume (sets and reps) to stimulate growth. In general, your rest periods should be in the 1- to 2-minute range.

While choosing a weight at which you can do just 8-12 reps builds muscle, it also builds strength, no doubt. But that weight is not optimal for strength building. When focusing on maximizing your strength, you want to train with even heavier loads, ones you can lift for just 1-6 reps. These very heavy weights provide the stimulus needed to grow stronger.

In fact, that's how the biggest and strongest men and women in the world train—especially powerlifters. They throw around superhuman weights in competition, and you can bet they practice in a similar fashion.

Train like a strength athlete: Strength trainers differ from bodybuilders, in that they typically avoid taking sets to muscle failure, which could adversely affect the nervous system.

Most of these individuals don't train heavy all the time, however. They cycle high-intensity periods (heavy training) with low-intensity periods to save their joints, reduce the risk of injury, and peak at the right time for competition. Hence, they typically follow a 12- or 16-week periodized program that gets progressively heavier. That means doing sets of 5 reps, 3, and finally 2 and 1. The strength trainer also targets the fast-twitch fibers. His focus isn't just on building and strengthening the muscle fibers themselves, but also training the nervous system.

Train like a strength athlete: Strength trainers differ from bodybuilders, in that they typically avoid taking sets to muscle failure, which could adversely affect the nervous system. Rest periods between sets for main lifts are fairly long—up to 3-5 minutes—so that incomplete recovery doesn't inhibit succeeding sets. After the main multijoint exercise, additional movements are included to strengthen weak links in the execution of the main lift.

Your eye may be on getting as big or as strong as possible, but not everyone wants to pursue that goal. The classic example of the marathon runner, who runs at a steady pace for 26-plus miles, is one geared toward improving muscle endurance. In the gym, that translates into using a lighter load for 15 or more of reps.

Low-intensity training is typically considered aerobic exercise, since oxygen plays a key role in energy or production. This allows you to maintain your activity level for a longer period of time. This energy process occurs primarily in slow-twitch muscle fibers, so performing low-intensity, high-repetition training builds up the mechanisms within the muscle cell that make it more aerobically efficient.

This type of training enhances the muscle's endurance without necessarily increasing the size of the muscle. Highly trained aerobic athletes can do lots of reps for long periods of time without fatiguing, but you won't typically see a sprinter's body on a marathon runner. 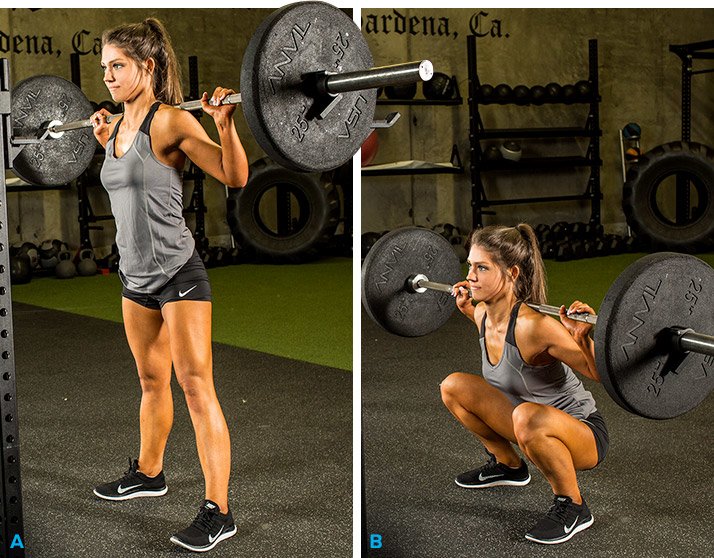 Focusing on muscle endurance means choosing fairly light weights that can be done for 15-20 reps or more.

Train like an endurance athlete: Most endurance sports aren't gym-based, so it's hard to duplicate their motions with weights. Low-weight/high-rep lower-body multijoint exercises and even Olympic lifts can be done to improve muscular endurance, so long as form is never compromised in an effort to keep a set going.

Rest periods should be kept fairly short, since oxygen intake and lactic-acid removal shouldn't be limiting factors as you exercise.

The Relationship Between Reps and Weight

Discovering how many reps you should do also tells you how much weight you should lift. The two are inseparably linked. If you were to plot a graph, you'd discover a near-linear inverse relationship between the two: add more weight and you can do fewer reps; with a lighter weight, you can do more reps.

I'm always amazed when I train with a new partner who has been stuck at a certain weight-and-rep scheme—say, dumbbell bench press with 80 pounds for 8 reps. I'll tell him to grab the 90s, to which he'll respond, "I can't do that!" Well, yes he can—just not for 8 reps. Invariably, he'll handle the 90s, and with that newfound sense of strength even give the 95s and 100s a try.

With time, you'll understand your personal strength curve and the relationship of weight to reps for each exercise you do. Jotting your numbers down in a logbook or on BodySpace will help you keep track of your reps and weights used.

This brings up an important point: You don't need to train in one rep range all the time. You might start a workout with a heavy compound exercise for 5 sets of 5 reps. To focus on building muscle, you could follow that with a few exercises in the 8-12 range. To finish the workout, you could even tap into your slow-twitch reserves and finish the session with an isolation exercise in the 15-20 range.

With time, you'll understand your personal strength curve and the relationship of weight to reps for each exercise you do. Jotting your numbers down in a logbook or on BodySpace will help you keep track of your reps and weights used. This is important because as you get stronger, you'll want to lift more weight in the same rep range. When building muscle, once you can do more than about 12 reps on a core lift, it's time to increase the resistance by about 5-10 percent.

The weight you choose along your strength curve should correspond to the number of reps you want to achieve, which matches your training goals. In that sense, your workouts should never be random, where you just grab any old weight; there is a best weight and optimal number of reps you should be doing. It just depends on which goal you want to prioritize!