If your posterior chain training needs a kick in the ham, this list is for you. Check out our top 10 most effective hamstring exercises according to you!

Despite the hamstrings arguably being the most important muscle group for athletes, they are often laggards in physique competitions. You may see an entire lineup of bodybuilders with massive upper bodies and thick quads, but few will have well-developed hamstrings.

Most people think hamstrings only serve one function: knee flexion. In reality, the hamstrings are not one single muscle, but a group of muscles with multiple functions. The hammies' most important function is hip extension, which is vital for explosiveness, sprinting, jumping, and even low-back health.

If you've been slacking on your hamstring training, or your posterior strength needs a kick in the ham, this list is for you. We've gathered the top 10 hamstring movements in the Bodybuilding.com Exercise Database based upon user ratings. If your favorite isn't on the list or is ranked lower than you would like, just log in and rate your top exercises!

The deadlift is, not surprisingly, our champion. The "clean" version of the setup is slightly different from your conventional deadlift, placing more tension on the hamstrings (as opposed to the low back). Your butt will tend to be a little lower and your hands a little bit wider. In a clean deadlift, which simulates the positions needed in the first phase of a clean, your shoulders will be a little in front of the bar, your shoulder blades retracted, and you will have to use your lats to keep the bar close to the body. You may use a little less weight in this setup than your regular barbell deadlift, but it is great for training the posterior chain. 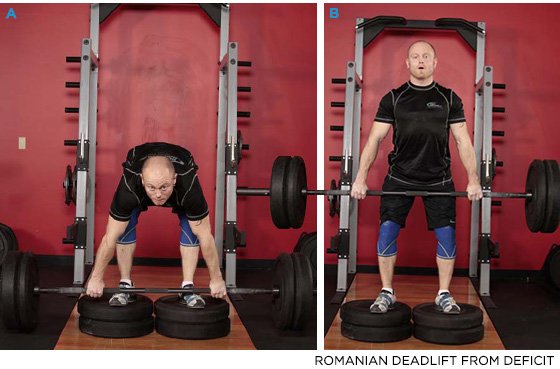 While called a Romanian deadlift, this is actually a stiff-legged deadlift. The knees should be slightly bent and then stay that way. When you "bend over," your hips will move back only a little bit. Bend around the hips, letting the shoulders go forward. Some people will intentionally round their backs on this movement to train their erectors; just as rounded-back good mornings are used. I would save this technique for advanced lifters who know what they're doing.

A unilateral approach to the hip hinge allows us to reduce the load on the back while still fully recruiting the hamstrings. The biggest mistake on this movement is rounding of the spine. Remember: the entire upper body should be rigid, rotating around the hip. No roundy backy! 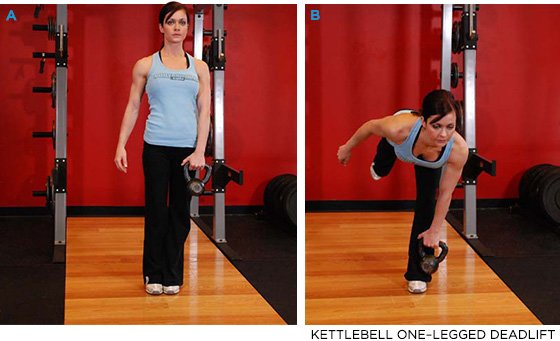 While the snatch is a full body movement, upward acceleration of the bar relies heavily on the power of the hamstrings. A full snatch is difficult to learn, but most can probably learn a power snatch, where you receive the bar above a full squat (or even standing). The reason this movement is so good for hamstrings is that the first two phases of it are essentially a deficit deadlift and a Romanian deadlift, both of which are huge hammy killers.

The hang snatch is similar to the power snatch, but it eliminates the initial pull from the ground to the knees. I recommend beginning standing upright with the bar hanging, and then pushing your butt back until you are in pulling position (as opposed to just starting in your pulling position). If the first part of this movement feels very much like a Romanian deadlift, then you are doing it right.

The poor man's version of the glute-ham raise is significantly harder than the original. You can't quite get all the benefits of the full version off of the floor, but this will be the hardest knee flexion exercise you can do. Most people won't be able to do this movement at first, so I recommend using a band, a training partner, or using a push-off to bring the difficulty down a notch. 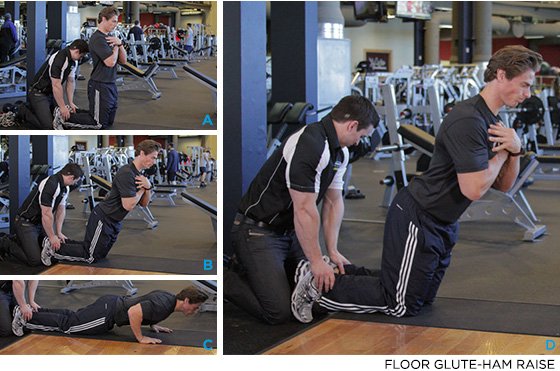 Like our other Olympic movements on this list, the power clean involves explosive hip extension driven by the glutes and hamstrings. There are several benefits to pulling off of blocks instead of the floor, but the primary reason to do so is that most people will not have the mobility and the technique to pull from the floor without some fault in their technique. In some cases, it might be better to focus the movement to the most important part.

The leg curl is a classic bodybuilding movement to isolate the hamstrings from the rest of the posterior chain. Unless your machine has a cam on it, your leverage usually improves making the movement easier during peak contraction. If this is the case, I typically will put a band around the rollers so that tension will increase through the range of motion.

The key in the Romanian deadlift is to move your butt back. Think of it as a horizontal movement, as opposed to a vertical movement like our other deadlifts. In this style, our butts move back with the knees slightly bent. Done correctly, even with no weight, by the time your hands reach the knees, your hamstrings should feel like they are going to rip off. If you can touch your toes, you are doing it wrong. Keep your head up, trying to create as much distance between your chin and your butt as you can. 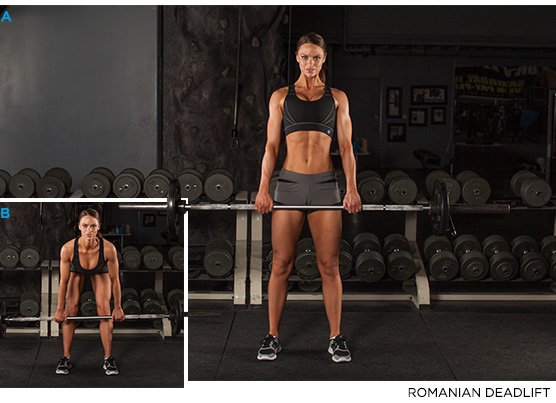 We started our list with a deadlift, so it's appropriate to end on one. The very wide stance of the sumo deadlift takes some of the load from the back and transfers it to the hips. The setup makes it easier to maintain proper position, and it is fantastic for developing hamstrings and glutes.