What Is Vitargo? Anthony Almada Sheds Light On Recovery Supplement!

What's the big deal about post-workout recovery and this product? I wanted to learn as much as I could about this... To find my answers, I had the privilege and honor to interview Anthony Almada. Learn more.

The post-workout or "anabolic/anti-catabolic"-window is without a doubt the most critical time frame for individuals wanting to transform their physique and, perhaps, for performance improvements.

The nutrients we consume during this time can have a tremendous affect on our physique and overall health. While there are many post workout products on the market, some are better than others. One of those is discussed here.

In the 1960's, a duo of Swedish university scientists began research on carbohydrate/glycogen loading and published their work in the worlds leading science journal. From this same laboratory, which also invented and pioneered creatine loading, a new product - now patented - was first proven, but until recently, it has essentially flown under the radar.

I wanted to learn as much as I could about this product, what the big deal is, and why it is any better than Gatorade, white bread, or other post-workout products.

To find my answers, I had the privilege and honor to interview Anthony Almada, B.Sc., M.Sc., one of the leading experts in the field of supplementation and nutrition.

Going into the interview I wasn't sure what to expect or how willing he would be to speak to me about this topic. However, coming out of the interview, nearly two hours later, I was nothing but impressed.

Mr. Almada's knowledge in the field was nothing short of astounding, and as I continued the interview, I noticed how humble and sincere he was. Let's learn a little more about this product, learn from one of the best in the field, and see how you can take your physique to the next level.

Who is Anthony Almada B.Sc, M.Sc?

Why was I surprised that Mr. Almada was so humble and sincere? Well, his CV is nothing short of impressive as he co-founded a company you might have heard of; 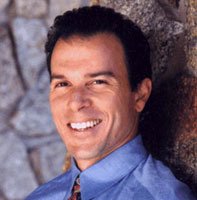 Click To Enlarge.
Mr. Almada Runs One Of The Hottest
New Companies In North America, GENr8.

That's right, he was essentially the mastermind behind that company and eventually sold the company to Bill Phillips. A graduate of

, with a Masters degree in nutrition and exercise biochemistry, Mr. Almada now finds himself running one of the hottest new companies in North America,

. It has launched a new product in

This product is a patented molecular

, currently derived from a special barley starch. This was where my confusion began as I asked Mr. Almada why I had heard it could come from

and even potato starch. "[The product] you must remember is its own entity, and has its own molecular hand print," Almada responded.

"While it can come from waxy maize, potato starch or barley starch, or even wheat or rice starch, the extraction technique is what is necessary to create it. The starting starch is far less important.

To say that waxy maize and other forms of starch are what make it is simply not true unless it is extracted into the specific, patented handprint that makes it. And since it is patented, knocking off [this product] carries the risk of a law suit," Almada adds.

While it can be made from most plant starches (potato starch, barley starch, or waxy maize from corn), what makes it patented and the fastest way to replenishing glycogen is not the source, but the unique, patented molecular "handprint."

"So it doesn't matter where it comes from, just that it is extracted properly and in our case here at [my company], we are using barley now and have the exclusive rights to [it] in several countries," Almada says.

Is There Proof That It Works?

"The first couple studies on [it] used potato starch and then eventually waxy maize, a type of starch that comes from a special strain of corn. This is where many companies got the idea to use waxy maize starches, but that is as far as they have gone. The magic of [this product] - the reason so many pro athletes/bodybuilders use it - is because it is PROVEN to work and DOES work," Almada says.

"That is something few other companies can say, proof in human subjects that it is better than conventional post-workout drinks containing maltodextrin and sugars as the primary carbohydrate source. Again, this has been proven in university studies in athletes, not animals." Almada says.

So, I asked Mr. Almada if many companies could in fact mislead the consumer by selling waxy maize as [his patented product], or making similar claims, when in fact it might have no more effect than white bread.

"Many companies have laid claims that their product has similar effects - faster out of the stomach, faster and greater glycogen repletion, higher insulin spikes, faster recovery - and just because a product simply says waxy maize does not necessarily mean it has the same effect as [my product] - or that it even works." Almada added.

"[My company's newest version] does in fact have a patent on [it] - from a variety of sources, and PROOF that it works[...], while waxy maize has... a cheap price. That is key as if one were to consume waxy maize instead of [my product], the results would be grossly different, although the consumer would have no clue."

Why is this product so different than other sources of carbohydrates?

Ok, so we now know that waxy maize and Vitargo are very different. Sure, the product can be synthesized via a specific process from waxy maize, but the same can be said of barley, potato, and a number of other edible starches.

GENr8 essentially has an exclusive to the Vitargo patents and guarantees it contains the molecular "handprint" proven in three university studies to work. So once we know for a fact that [this product] is present in our drink we must ask ourselves," Why is it different and more beneficial than Gatorade or white bread?" The key lies in its osmolality, molecular weight, and "branching".

Eyad competed in the Body-For-Life Challenge 2006 following a stroke in 2005. Today he continues improving his physique and that of others.