Video Article: Turn Your Life Around

Ed Cook shed 52 pounds in 7 months, and saved his own life. Bodybuilding.com presents how he did it, and how you can too.

For 56-year-old Ed Cook from Vancouver, Washington, his BodySpace nickname, "Old Superman," isn't an oxymoron or an ironic joke. No, he isn't a man of steel. But he is a man of iron. And he has rescued at least one life.

Turn Your Life Around - Transform Your Body From The Inside Out 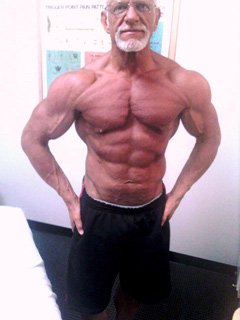 In his thirties, Cook's only use for a superhero's cape would have been to obscure his protruding gut. His weight had ballooned to 243, an unwelcome gain of more than 50 pounds. His doc issued a warning: If you want to avoid a heart attack, Ed, shape up and slim down, stat. It wasn't a pleasant ultimatum. Then again, better to receive a health-related newsflash sitting in an office than lying on a gurney.

Many people ignore that warning until they're staring up at EMTs or the lid of a pine box. But Cook had a lot to lose, including a wife of 30-plus years and four kids. So he did his best Superman impression, training and cleaning up his diet like a man on a mission. Fifty-two pounds, gone in seven months. Since then, he's rebuilt his body to 210, adding muscle this time, not fat. So impressive are the results that he now competes in masters' bodybuilding contests.

Ed found inspiration by reading other people's accounts of personal transformation. Now his story, along with many others, serves as an inspiration to you in the book powered by BodySpace - Body by Design.

In the accompanying video, Cook discusses the attrition factor. So many people start their transformation with the best of intentions; so few stay the course. "Life becomes overwhelming, and you feel that you don't have enough time," he says. Who hasn't felt way that at some point in his or her life? Maybe you're feeling that way now.

Your first impulse may be to skip your workouts, but that's the last thing you should do. Training, according to the experts, is like kryptonite versus stress:

"That half hour or hour a day you spend in the gym is precisely what you need to manage those other 23 or 23½ hours,"

Says Jimmy Peña, C.S.C.S., who helps Mario Lopez, Tyler Perry, and other stars find training time and then puts them through their paces.

"It's the single most efficient use of time." 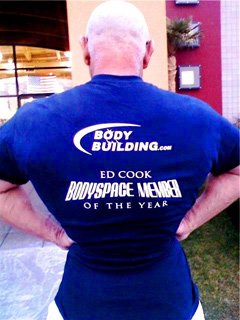 Allow stress to take over, and the negative health effects begin piling up like railcars in a train wreck. Weight gain is perhaps the most insidious effect of all. As it turns out, the stress hormone cortisol signals the body to store fat. So when you're stressing, you're literally packing on the pounds 24/7. Instead, you could be adding muscle to boost your metabolism, allowing you to become a fat-burning pyromaniac.

Stress also sabotages sleep, which is a Catch-22, since stressful periods are when your body needs sleep the most. Disrupt your sleep, and an already stressed endocrine system releases additional cortisol, leading to more body fat. Unfortunately, one in three Americans now suffers from insomnia. You might be one of them without knowing it. When researchers wired up subjects to study their sleep patterns, they found that while the participants spent an average of 7.5 hours in bed, they were asleep for more like 6 hours. Not nearly enough.

So it's time to wake up to the havoc that too much stress and too little sleep are wreaking with your life. Stress has already hurt your physique; now, poor sleep can lead to more serious problems than just being kicked out of bed:

Type-2 Diabetes
Poor sleep is a nightmare for glucose metabolism. Even one night of partial sleep reduces insulin sensitivity in a healthy person, so imagine what too much tossing and turning does when glucose tolerance is impaired.

Sexual Dysfunction
Miss as few as two hours of sleep, guys, and you're working with only half of your normal levels of erection-powering hormones. What's more, one quarter of the U.S. adult population has a reduced interest in sex (or no interest at all) because they're too tired, says the National Sleep Foundation.

Hypertension
Researchers are finding that disturbed sleep patterns add 10 points or so, on average, to both systolic and diastolic blood pressure.

Obesity
The obesity risk doubles for people deprived of just two hours of sleep, not because the insomniacs raid the fridge after midnight, but because their appetite-regulating hormones are thrown out of whack, resulting in a 25 percent rise in consumption per meal during the day. What's worse, a University of Chicago study found that sleeplessness skyrockets your cravings for junk food, sweets, and other gut-busters.

Pop Fish Oil Capsules
Clinical trial after clinical trial finds that long-chain omega-3s exert a mood-elevating effect rivaling that of antidepressant meds. Just ask people in Japan and members of other seafood-consuming nations, which have the lowest depression rates in the industrialized world.

Play An Instrument (or at Least Fake It)
A friend of mine plays the piano at the same skill level he had at age 9. He's terrible, and his wife and kids wish he would stop. Yet he insists that it's the most head-clearing, relaxing thing he does. (Well, maybe number two.) Don't play? Then at least get an iPod. Studies find that hearing music for an hour a day can lead to a 25 percent reduction in depression symptoms.

Set Concrete, Short-Term Goals
Don't settle for vague musings such as, "I want to feel totally better," or, "I want to look completely different." Those tend not to work. Why? They don't allow for frequent positive reinforcement. Remember that great feeling you experienced that last time you aced a challenging new exercise? The idea is to experience that sort of feeling every day or week, rather than waiting months or years for one grand success that may never arrive.

Crack Open Body by Design Before Bed
Whereas the TV's blare and flickering light will keep you up, the repetitive nature of reading line after line soothes the brain, allowing it to slip easily into the sleep state. Kardashian Konfidential doesn't count, by the way.

Hit The Trail Or Treadmill
Northwestern University researchers recently found that those suffering from chronic insomnia improved both their sleep and quality of life when they engaged in even moderate aerobic workouts. Other research teams have found that regular exercise can also prevent sleep problems from ever taking hold.

Don't worry about that oft-repeated theory that training late will keep you awake later, either. A recent study in the Journal of Sleep Research debunked that notion. Even vigorous late-night exercise shouldn't keep you awake. So train whenever you feel up to it, or when it best fits your schedule.

Just make sure you train.

Get quick and helpful advice with these short video articles to get the best possible results.