Find out how to diet like a pro and win your next contest. Check out the diet and supplement plan as an example for planning out your weekly diet!

Reprinted With Permission From: NPCNewsOnline.com.
Originally published in 2001.

I began weight training in August, 1987, as I was preparing for my football season and track and field. My style of training, even then, was geared towards bodybuilding. Actually, I began high school playing basketball and track and field. It wasn't until my sophomore year that I moved to football as well.

I really started training for my first bodybuilding contest in April of 1988. The owner of my gym, Mark Delp, urged me to give it a try because I was fairly gifted genetically and it sounded like a great challenge.

As with any beginning bodybuilder, I had to learn how to diet for that first contest. I learned my dietary techniques through a combination of advice from other body builders, magazines and a great deal of trial and error.

Through the years, I've learned from the various other sports I participated in that to succeed in any sport, you had to sacrifice, suffer and have a great deal of discipline, all of which lead me nicely into the bodybuilding lifestyle. Another benefit is having my wife Brandy involved in the sport along with me. She earned her IFBB Pro Fitness card at the NPC Team Universe Fitness Championships. Of course, my goal was to win my class at the NPC Nationals, which would get me my pro card as well, but I also wanted to win the overall as well. I took what I learned over the years about dieting and applied it for the Nationals.

Because of Brandy being involved with me, we prepare meals together and we're very careful to prepare each other's food properly and in the right proportions. We find that we cheat much less because of the support system we give each other.

My typical daily meal plan during pre-contest time consists of:

Off-season I'll eat the same foods in larger portions. My protein content is always the same year round, but my carbs are much higher in the off season. I also allow myself to cheat anytime I want during the off season provided that I've eaten my six healthy meals first.

In addition to my meals, I also use vitamins and supplements as follows:

I find that I get asked if I ever use sodium loading/depleting or carbohydrate loading/depleting? Actually I've found that both methods help me greatly. I sodium load on Saturday, Sunday, Monday and Tuesday for a Friday night pre-judging. I then cut my sodium to around 400 mg. for Wednesday and Thursday. Friday afternoon I eat some sodium to keep my electrolyte balance, but I don't drink any water. 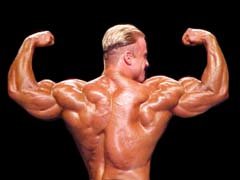 I'll carb deplete on Sunday, Monday and Tuesday, taking in 100-125 g. per day. On Wednesday I eat 500g, Thursday I'll eat 400g and then drop to 250g on Friday. I find that using these two methods together allow me to be full and dry at the same time. Unfortunately you have to try all scenarios to know how your body will react. Everyone's different, so trial and error is going to be your best method for most things.

Brandy and I are also fortunate to have our own facility, Flex Fitness and Aerobics Center in Medford, Oregon. We've owned the gym for four years and it does well. The first three years we owned the gym I was so busy that often times my training was interrupted or cut short. However, the last year has been great because we've hired a management team to run the club for us so my training and dieting will be on the money from now on. That really helped with my preparation for the Nationals.

Since winning the Nationals, my goal right now is to compete in May at the 2000 IFBB Toronto Pro and IFBB Night Of The Champions. I hope to qualify for the Mr. Olympia at one of those contests. I hope to continue to do a good amount of guest posing and appearances as well because I love this opportunity to meet the fans and the promoters of the NPC all over the country. In a broad sense, my goal is to help bodybuilding become a widely accepted sport to everyone, everywhere.

Truly, my life is a dream come true because of bodybuilding and fitness. I met Brandy at a health club and I get to compete in a sport that I love. I get to meet people from all walks of life. I've learned discipline, respect of others, the power of hard work, self control, pain tolerance, humility and so many other things through competitive bodybuilding. I truly love the sport and I feel blessed each and every day that I have the opportunity to compete and train.

Be sure to also check out:
NPC Fitness Rules And Moves!