Looking for the most efficient way to build a leaner, firmer physique? Then get ready for some serious results with this nine-week training program!

Looking for the most efficient way to build a leaner, firmer physique? Then get ready for some serious results with this nine-week training program.

If you're the typical hers reader, this workout is for you. You know who you are: You laugh when you see lightweight "toning" workouts in other so-called women's fitness magazines. You're not afraid to put some weight on the bar or drop your reps into the low single digits on your last set to hit a personal best on a lift. And, best of all, you realize the silly misconception that "using big weights will make you bulky," is just that - a misconception.

"It was proven a long time ago that women can't add muscle mass as fast as men because they lack significant production of the male hormones - namely testosterone - that are responsible for dramatically increasing both size and strength," says David Sandler, MS, CSCS, president of StrengthPro Inc., a Las Vegas-based sports-performance consulting group.

"Even after years of training, women wouldn't see nearly the gains in muscle mass a man would."

Yep, you understand that fact, and rather than being limited by it, you want to use it to your advantage. That's because good old-fashioned strength training - where you work up to heavier weights that allow you to complete only 6-10 reps per set - actually caters to your workout goals.

"One of the main benefits of training with heavy weights is increased muscle density," says Sandler, who created this program.

"Over time, this will increase your metabolic rate, which will allow you to burn more fat and calories, even when you're not working out. In other words, muscle density means that your muscles will feel firmer and look tighter because of lower body fat levels."

In addition, if you play sports outside the gym, coordination, speed, balance and other performance factors will be enhanced with increased strength. So consider this program the most efficient road to a harder physique and better overall physical performance. 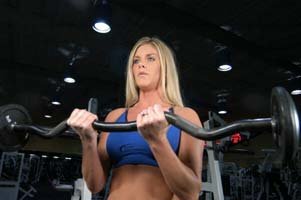 This plan is all about getting the most bang for your buck with plenty of basic compound exercises and the heaviest weights you can handle for 6-10 reps. It's broken down into a trio of three-week phases, each of which builds off the previous phase so that by the ninth week, your strength reaches peak levels.

You'll train four days a week, splitting your workouts into two upper-body and two lower-body days, with each workout taking less than an hour to complete. This split ensures that each muscle group will recover fully before it's trained again - while you're hitting your lower body, your upper body will be resting from the previous day's session.

If you're used to training each body part three or more times a week, Sandler offers this:

"For optimal strength gains, training less frequently but harder and at a higher intensity each workout will bring better results. If you're able to train the same body part more frequently - say, three times a week - you're probably not pushing yourself hard enough."

The distinguishing features of this program are lower rep schemes (6-10) and longer rest periods between sets (2-3 minutes). To build strength, there's really no other way to do it.

"The key here is to perform near-maximal lifts," Sandler says.

"You need to use heavier-than-normal weight, which forces you to use fewer reps and take longer rests to allow for adequate recovery within the workout. If you're resting only 30 seconds to a minute, you won't be nearly as strong for your next set as you would be after resting 2-3 minutes, which defeats the whole purpose of strength training."

During Weeks 1-3, you'll ease into the heavy lifting by doing sets of 10 reps in the first part of each week and eight reps the rest of the week. You want to build a foundation before progressing to the heaviest weights, especially if you're used to training with higher reps (15-20). By Week 7, you'll be conditioned to handle the heavy stuff, and that's when six-rep sets reign.

For the workout, pick up the September/October 2007 issue of Muscle & Fitness Hers. This issue is available.

Weider has been in this industry for many years and continues to bring quality products to its customers.