After realizing obesity was probably going to kill him, Big Boy opted for weight-loss surgery. He lost more than 300 pounds and gained a new appreciation for life.

Big Boy never felt bad about his heavy weight. He wasn't teased as a child. He wasn't lambasted as an adult. On the contrary, Big Boy was rewarded for living large—literally. "I became comfortable with being that size," he said. "Being comfortable, I could accommodate 500 pounds. If I wanted to drive, I would drive a bigger car. If I wanted a suit, I would get a suit made." He didn't hide his weight; he coupled it with his funny, charismatic personality to create a radio persona. His weight became an integral part of his character.

Being obese wasn't always easy though. On airplanes, Big Boy would have to buy two seats and use the empty seat's
tray-table because he was too big
to use his own. He would also worry
obsessively about his luggage
because he knew that he wouldn't
be able to just go to the "local mall
and buy an 8X shirt."

Big Boy said he tried losing weight,
did yo-yo diets, and even lost 110
pounds during a promo with Will
Smith, who forked over $1,000 for
every lost pound. After seeing that
$110,000 check, Big Boy remembers
heading right for a restaurant for nachos. "At the final weigh-in I kind of threw it away because I thought I was done," he says. "Will Smith cut the check and the promo was over.
I was done."

Waking Up From Fat

Big Boy gained all the weight back, plus more. After he re-packed the pounds, Big Boy noticed pain in his lower back, numbness in his leg, and shortness of breath. At 33, he started to question his lifestyle. "I started to ask myself, man, do you have more years behind you than you actually do in front of you? Because you don't see any 500-pound 65-year-old men walking around." The thought scared him. 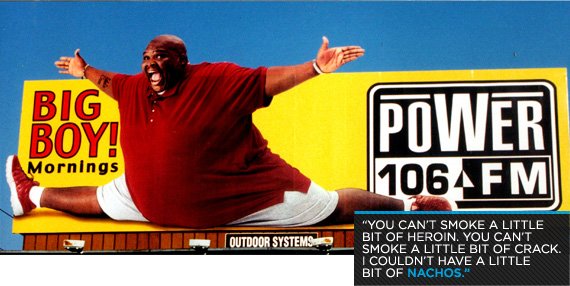 Big's changing mindset made him recognize the danger he was putting himself in. "Everything that you do is like a credit card. If it's multiple sex partners, if it's drinking, if it's smoking, whatever you're going to do, you're going to keep charging that card—charging, charging, charging." For Big, fried chicken, his weight and his 8X shirts were taking over his credit balance. He knew he would at some point have to pay: "Was it going to be a heart attack? Was it going to be diabetes? Whatever it was going to be, I was going to have to pay for it," he said.

Although he had managed to avoid health problems—his blood pressure and cholesterol were normal—Big knew that something bad was probably on its way. Although he didn't speak about this with his family or friends, he said he "could really feel that death was coming."

He knew he had to make some serious and immediate changes to his lifestyle. Eating plates of nachos just wasn't going to cut it anymore. Given the enormity of both his body and his situation, Big decided to kick-start his weight loss with bariatric surgery. The decision to allow a doctor to cut, staple and reconfigure his stomach and intestines was not an easy one; but in his case, it turned out to be the right one.

Big decided to have a type of bariatric surgery called the "Duodenal Switch," in which a surgeon removes 70% of the stomach and reattaches the smaller stomach to the lower-third of the small intestine. This enables the body to absorb fat only for a limited amount of time, which usually amounts to a mere 20 percent of total fat intake. Less food and less fat coupled with a good diet and a healthy lifestyle generally leads to serious weight loss. That's what happened for Big.

Eight years, and more than 300 pounds after his surgery, Big Boy says he still struggles with portion control. "I've still got portion distortion," he says. "I still sometimes order with my eyes and not with the size of my stomach."

Today, he focuses on a good diet and exercises regularly. Although he's not a gym freak, he does martial arts and runs around with his 5-year-old son, who he calls a "Speedy Gonzales."

His diet favors items like chicken, leafy greens, and juice. Although his body can handle pretty much any type of food, he makes sure that he eats as cleanly as possible. There are times, like when he's on vacation, that Big Boy will eat fried chicken, but it's rare.

Now what Big puts in his mouth is keeping him alive instead of slowly killing him. Because his stomach can't handle a large amount of food, he must acquire much of his nutrients from supplements like trace minerals, kidney extract, liquid vitamins, calcium and protein bars and shakes. Without these necessary nutrients, Big Boy risks vitamin deficiency and malnutrition.

For people who are in the same place as Big Boy was before the surgery, his advice is, "anything they do needs to be for them." Although he had a large support system, Big Boy declares, "I had to make sure I supported myself and loved myself as much as the people around me." When the switch turns on, and you want to change, Big says, "It starts with you first. You can't do it for anyone else."

Big Boy's victory against obesity was no easy feat. But, because of his determination to change, he can look forward to many years of life instead of many plates of nachos.

If you'd like to learn more about Big Boy and his weight loss, buy his book An XL Life: Staying Big at Half the Size.

At Bodybuilding.com, we emphasize the need to exercise and eat healthfully as the ideal means of losing weight. Some individuals, like Big Boy, go so far beyond their ideal weight that they feel compelled to undergo bariatric surgery. Even those individuals need to implement lifestyle change moving forward. Here are some tips: