I recently had the pleasure of interviewing 9-time UFC Champ Matt Hughes. Join me as Matt talks about past fights, training, nutrition, off-season and more right here. Check it out!

Update: Matt Hughes loses via an armbar in round 2.

[ Q ] Matt, you are a 9-time UFC champ. Most people will never even make it to the UFC, let alone have that belt put around their waist! Out of all the title fights, is there one you remember most fondly or that just stands out and why?

The rematch with Carlos Newton in London. It was the most meaningful because everyone thought it was a fluke that I beat him the first time. The way that fight ended hopefully made people realize it was not a fluke.

[ Q ] You will be trying to regain the welterweight belt at UFC 79 against Matt Serra. Much has been made of the bitterness between you and Serra on TUF 6. Is there really that much dislike between you two, or is it more so just two highly competitive people butting heads?

For me it is about the competition and I think for Matt Serra he doesn't like me and so for him it may be more about dislike. Serra is not someone I would hang out with, but I do not hold any animosity toward him. 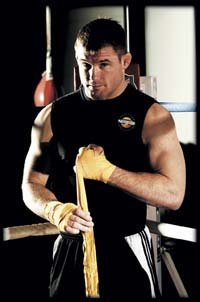 [ Q ] Serra's strong point is his jiu-jitsu, so how surprised were you when he was able to knock out George St. Pierre to win the title?

I was surprised and considered it a fluke to be honest.

[ Q ] Do you believe that it had more to do with GSP's state of mind at the time (I've heard many experts say he was not mentally ready for the fight) or do you think it was just another case of "anyone can get caught at any given time"?

It is true anyone can be caught and I had chalked that fight up to just that. He did look good

[ Q ] Your strong point is wrestling but you also have good submission skills (18 submissions in your career). I assume you will be comfortable to take this fight to the ground even with Serra's jiu-jitsu being so strong? Do you feel your wrestling background gives you an advantage when it comes to putting yourself in proper position to pull off more submissions?

background in this sport.

I do lift prior to going into my

and I continue it once I get in to the specific training. For example, I do not do a lot of

but the lifts I do; in what I will call the maintenance phase (general conditioning), I will start doing circuits once the "real" training phases come.

So my phases going from general to specific as do the exercises that accompany those phases. The closer to the fight the more specific my training becomes for the fight. I normally take time off after fights (

phase) where I do not do much of anything except work on the farm as exercise. 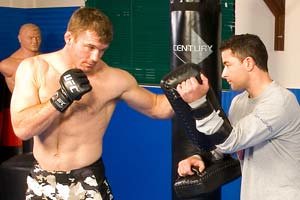 Click Image To Enlarge.
The Closer To The Fight The More Specific My Training Becomes.

I do not have an elaborate plan. I watch what I eat when I am a few months out from a fight. I will still have food I like but I try to maintain my weight around 185 pounds and limit the sugars. I take

products throughout the year) and that is the basis of my nutritional plan. 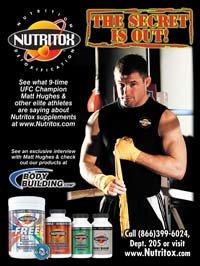 When I am in the

phase I eat whatever I want; whenever. I am not an unhealthy eater for the most part, but I do not restrict the chicken wings and desserts. My brother and I love to barbecue and do it often. So my eating changes but my products don't as I continue to take the

[ Q ] You see so many guys who have to drop 20 pounds in 3 days or stop drinking water for 2 days in a row to make weight for a fight and during the fight you see them completely gas. How do you maintain your strength and energy while simultaneously dropping weight for a fight?

I have always believed the strength I get throughout the year being bigger than the weight I fight at; is more than the loss I have the last few days during weight loss.

I have some good coaching around me that specialize in proper weight loss and I have done it for so many years it seems as if my mind and body are "used" to it and know how to handle it.

[ Q ] How much weight do you typically drop for a fight and how long do you take to drop it? 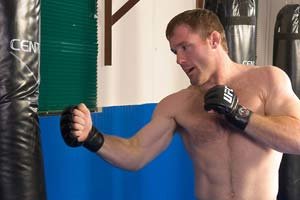 I use Nurtitox Daily Multivitamins and the Joint Renew. When

as well when lifting.

[ Q ] What do you feel your strongest attribute is (can be mental or physical attribute)?

is my strongest trait and then I would say my physical strength would be number two on the list of strengths. 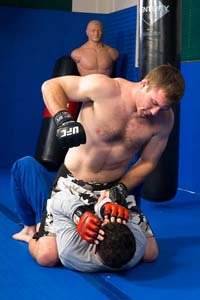 Click Image To Enlarge.
Mental Toughness Is My Strongest Trait.

Ohh, I do not know. I know a couple of BJ's punches seem to be pretty hard.

[ Q ] After Blake Bowman's in the first round Mac Danzig went after him pretty hard even though Blake was his own team and Blake talked about how he looked up to Mac. How hard is it as a coach to get these guys to buy into a "team" concept when, in the end, only one of them takes home the contract and they are all competing against each other for it? Is there any strategy you use to try to get them into the 'team' mentality?

In the beginning it is one team against another and so we have a long enough time to instill a team mentality. I had a good coaching staff and that helped in the team building aspect. Teams are made of humans and humans make mistakes everyday so it is an issue: the longer the show goes in some respects (especially when you have competitive people on a team).

An old saying, "It is only a small crack but cracks make caves collapse." Is appropriate. When you see something happening you have to discuss it and that is why you saw me calling for a meeting as soon as it came to my attention.

[ Q ] Are you building a new gym? If so, how is the progress on that is going?

I am building a new gym in Granite City, Ill. It will be called Hughes HITS (

) and should be open by the start of the new year.

Matt Serra has dropped out of UFC 79 due to injury, and now Hughes will be fighting St. Pierre in a hugely anticipated rematch.

Update: Matt Hughes loses via an armbar in round 2.