He was bigger, faster and stronger than anybody that had ever taken to the rugby field before and since. Here's more as Jonah Lomu competes in his first ever bodybuilding contest.

In 1995 the world of international rugby was set ablaze when the colossal winger, Jonah Lomu took to the field during the Rugby World Cup. He was huge, he was fast and he was virtually unstoppable.

Running over his English opposition like a freight train, sports commentators raised the question, "Who is this guy and how in the name if God is he so strong?"

And truth be told, he was bigger, faster and stronger than anybody that had ever taken to the rugby field before and since. Jonah Lomu was hitting the weights during his teen years, reading magazines like Flex, Musclemag and MD. At a time when every other rugby player was throwing a ball around, Lomu was throwing around some dumbbells.

I caught up with the man himself last night, as he made the final preparations for his first ever bodybuilding contest, which is taking place in Wellington, New Zealand this coming Saturday.

[ Q ] Jonah, let me start off by saying it is an honor and a privilege to talk to you. I have been a huge fan of yours since watching you play in the '95 World Cup when you trashed the English team.

[ Q ] So when did you first get into bodybuilding?

I have always been interested in the sport, especially being a rugby player. You really need to build your body to be a competitive player. From a young age I was into it, so pretty much all my life.

But I never really took it that serious, in terms of training, because it could conflict with the rugby. I mean, having a bigger body part wouldn't really benefit my rugby and the position I played.

[ Q ] When you were playing rugby with the All Blacks, did you follow the sport of bodybuilding?

Yes, I have always followed the sport. It has always been a breath of fresh air to me; the transfer of training from rugby to bodybuilding that is. It allowed me to get more specific, training one body part at a time in the one workout.

But the explosiveness of bodybuilding training really benefited my rugby and that is when my training complimented each other, because in rugby, it's all about explosive power. 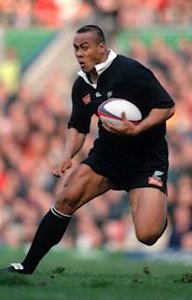 Click Image To Enlarge.
It's All About Explosive Power.

[ Q ] Since your kidney transplant, you must really have to be careful about what supplements you take.

I pretty much still use my supplements. I like my protein powders, but I like to add in the slow release proteins too. I have to be careful with Kre-Alkalyn and creatine, so that there is no build up of creatanine.

Being a kidney patient I have to be careful with that, I just stick to a regular dose of creatine; I don't load on it anymore like most people.

[ Q ] With regard to your training, how many days a week are you hitting the gym?

I actually train Monday through Sunday. I work around my rugby training, which I do in the mornings and I do my bodybuilding in the evenings or afternoon. My trainer, Joe Ulberg (6 Time NZ Champion) is really adamant about me being a functional bodybuilder. I need to stay mobile and be fit. 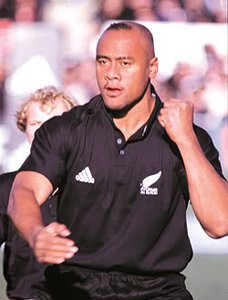 Click Image To Enlarge.
I Have To Keep A Really
Good Balance With My Training.

[ Q ] You've always been the big man on the field. When you trounced England, (being Irish I love that) what were you weighing in at?

[ Q ] After the surgery, did your weight change much?

Yea, I did put on a bit of bulk. I actually hit the 150kg (330 pounds) mark, but it mostly had to do with retaining fluids from the surgery and of course, sitting around. But, I guess that's what happens when they split your stomach open and you can't really do much.

But two weeks after the surgery I was back on a stationary bike. The surgeons said it would take me a couple of years, but I didn't think that they meant literally two years. I was like, yeah maybe a year, but I had no idea it would actually take this long.

[ Q ] What motivated you to get back to being the elite athlete that you were?

My son is actually my biggest motivator, but also I am a stubborn bugger. I am a true believer in believing that you are whatever you make yourself.

I don't want to ever to have to look back and think, what if? You get out what you put in; I believe in chasing your dreams and not letting them slip past you.

[ Q ] I totally agree with you bro. Back to bodybuilding, when you were reading the magazines, did you have a favorite bodybuilder whose physique you admired?

Mate, there are so many of them it would be unfair of me. But I admired the usual guys like Ronnie Coleman, Arnold, Frank Zane and even Lou Ferrigno. I admired all these guys, but at the moment I enjoy watching Phil Heath and Kai Green.

I really love watching Kai pose; for such a big man to be able to move like he does, it's very graceful. I really admire them all and what they do. It's a lot more than what people think.

The discipline that you guys have and need is really admirable. I guess I gotta admire the partners too for putting up with all the mood swings during the low carb diets. I am really lucky because my partner is really supportive. 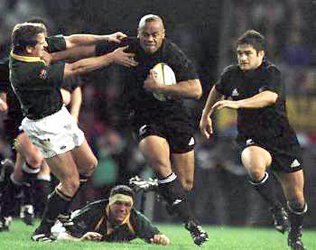 Click Image To Enlarge.
The Discipline That You Guys Have
And Need Is Really Admirable.

[ Q ] I remember seeing a video of your training a while back where you were squatting on top of a Swiss ball with a 100-pound dumbbell. Do you still do that kind of thing?

Yea, I still do those. I actually do some exercises now with 3 Swiss balls at the same time. I do my bench presses on there, and that really helps me keep my core strong.

As you know for rugby, I don't want my core dropping out on me during a game when I have to change direction at speed.

[ Q ] How are you splitting up your training?

With regard to my bodybuilding, I work out one muscle group per day, then I also like to throw on the boxing gloves and do some kickboxing.

And in the mornings I will do some rucking and other rugby training sessions. I like to keep my days full and train hard. If you are not seeing stars you are not training hard enough.

[ Q ] Awesome! So tell me, this weekend are you going to predict a placing or is this just for fun?

Well this is a competition and I am training to be competitive, but at the same time I have to be realistic, I am only doing this since March.

So, I think I am looking pretty reasonable, but I don't want to say anything like that. But I guess we will see come Saturday. I think anybody that steps onstage deserves applause. 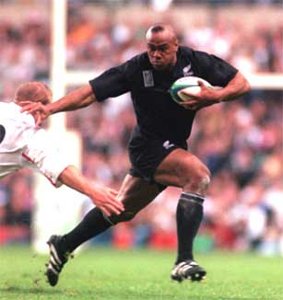 Click Image To Enlarge.
I Think Anybody That Steps
Onstage Deserves Applause.

[ Q ] So have you taken any progress pictures coming into the show?

No, no I haven't done any of that. I haven't even shaven down yet, I gotta do that tonight (laughing).

[ Q ] Hopefully we will get some shots of the show.

I am actually doing a couples contest too, with a girl named Tracey Toulis. We both have been through a lot. I had the kidney donated to me and Tracey has survived breast cancer. And it's only been a year.

Yea, this is one of my other motivators too; hopefully we will raise some money for a charity after our show. 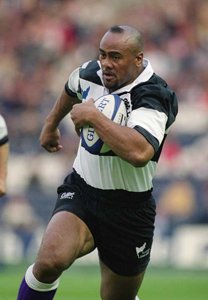 Click Image To Enlarge.
Hopefully We Will Raise Some
Money For A Charity After Our Show.

[ Q ] Thanks so much for taking the time to talk to us. Best of luck at the contest on Saturday!

Thank you, talk to you soon my friend.