Today we are here with IFBB Pro Hide Yamagishi less than one week out from the Europa Pro Show... Here is a sneak peak into his life, problems with customs, and how he has prepared for a return to the stage. Check it out.

Today we are here with IFBB Pro Hide Yamagishi less than one week out from the Europa Pro Show that will be held in Orlando, Florida, and we were lucky enough to catch up with Hide who, at this time, spent a few minutes between his intense training schedule to speak with his support group at Bodybuilding.com.

Hide, who is always giving his time to others here at Gold's Venice took a moment to answer 25 of our questions so fans could get a better look at who Hide of Japan really is. 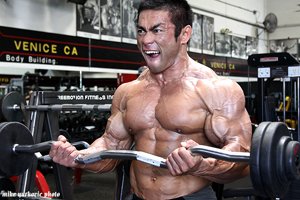 I was born in Hokkaido, Japan on June 30, 1973, which will make me 36 this year. Hokkaido is the northern Island of Japan.

[ Q ] What type of work did your parents do?

My father is a very smart man and he works a lot of hours as an engineer for a telecom company, so then my mother was able to stay at home as a housewife and keep the kids in line. My mother really was there to love and encourage and support us daily.

[ Q ] Do you have brothers and sisters and if so do they exercise?

I guess you could say I am the older and wiser brother but then I'd be telling a lie. I have 2 younger sisters and one younger brother. They sometimes go to the gym, but are not as serious. They are all skinny!

[ Q ] Growing up did you play any sports in school?

Just like most kids in America I first played baseball, then judo, martial arts, and rugby. In the latter years of school I focused more on just rugby.

[ Q ] When you were a kid what did you want to be when you grew up?

I always wanted to be a professional sports athlete. I thought I would be a pro boxer when I practiced martial arts because at the time in Japan there was no MMA event. 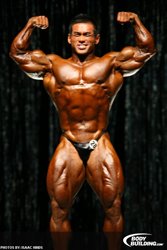 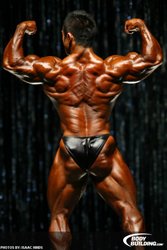 [ Q ] What did your parents think when you first started bodybuilding? Did they encourage and support you, or want you to do something else?

I'm so lucky because both my parents have been great through my whole career and they always support me what ever I do. I don't know if they have any clue about bodybuilding and the other people involved, but my family still come to watch my show if it's a big event.

[ Q ] What made you first start weight training?

It was due to my love for rugby. When I played rugby, I wanted to be bigger because I knew this would improve my contact skill. That was how I started lifting weights.

When I think about the gym now-a-days I laugh because back then we only had one bench and several barbells in high school, but I loved it because I saw my body was changed very quickly. 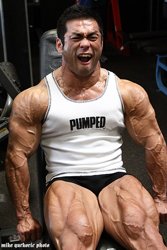 Click Image To Enlarge.
I Loved It Because I Saw My
Body Was Changed Very Quickly.
Photo Courtesy Of Mike Yurkovic.

[ Q ] How long did you train before you first competed and how did you do?

After I finished high school I quit playing rugby but still kept lifting weights. In college, I joined the powerlifting and bodybuilding team called Barbell Club.

[ Q ] How did your friends and people in Japan treat you after you reached a level where you were competing?

They were curious about what I did but not many people could understand bodybuilding in Japan. They must have thought I was crazy or something as it is not a sport that is very big in Japan.

[ Q ] A year ago you had some trouble with customs. After you went back to Japan were your treated different and if so how?

Before that trouble, people treated me like a hero because I was the very first Japanese bodybuilder who competed at the Mr. Olympia. But after that trouble happened, most of the people I thought were true and supported me were then gone.

I lost my contract. I was kicked out of the gym where I had trained and worked as a personal trainer for about 7 years. But there were still the people who were close to me and my fans support me. I never forget about their help and I promised them to come back even stronger. 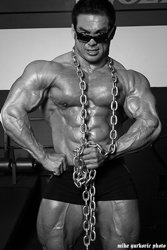 [ Q ] Now you are living in Los Angeles and without a contract, it must be hard to get by. If you returned to Japan you would be at home and have a job so it would be easier. What keeps you going to do it the harder way here in the USA?

I have contract with KNS (Koloseum Nutritional Science). Milos Sarcev, owner of KNS, helps me a lot. I think pro bodybuilding is more of an American sport. I would still be able to be a pro bodybuilder even if I live in Japan but would never make this position. After I moved here I met Milos and my career started changing. 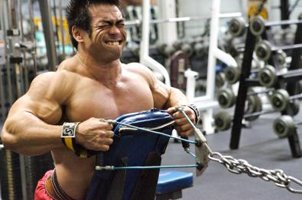 Click Image To Enlarge.
Hide Training At The Koloseum Gym.

[ Q ] Has your training changed from when you lived in Japan compared to here?

I used to train very basic and very heavy when I was a 20 year old in Japan. I would do perfect full squats with six 45 lbs plates on each side for 10 reps.

I was young and flexible so I never got a serious injury. So I use to always push myself to go very heavy. Now that I'm a pro bodybuilder and have a whole career at risk, I'm more careful when training. I still don't have any major problems with my joints but take much more care about exercise form and speed.

[ Q ] Do you think training with Milos or Charles has helped you and how?

Milos is the guy that put me in this position of being a pro bodybuilder. I learned a lot from him, and his training and nutrition changed my body dramatically. I still use his nutrition program.

Charles focused more specific training to win the show. Actually I trained with him for a very short period, about 4 months before the 2009 Iron Man Pro. He still gives me some important advice but now I train with Paul Finn who is a long time partner of Charles.

[ Q ] What is your strong point and weak point as a bodybuilder?

My lower body is always strong and has never been a problem to train. My biceps are very easy to grow too. I had difficulty training back and delts for a long time but after I met Milos, those body parts finally started growing and Charles and Paul made me improve those areas even more. 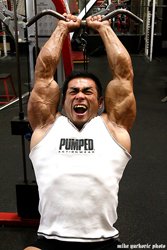 Click Image To Enlarge.
I Had Difficulty Training Back And Delts.
Photo Courtesy Of Mike Yurkovic.

[ Q ] If you weren't a bodybuilder what would you be?

I would be a pro boxer then a pro MMA fighter.

I want to see my full potential as a pro bodybuilder in the next 5 years then will move to another passion. I would like to train pro bodybuilders just like Milos, Charles and Paul to help the athletes do their best.

[ Q ] How many sets and reps do you like to do on an exercise? How many times a week do you train each body part? What type of diet do you follow in the off-season?

I train each body part once a week and I do about 3 or 4 sets per body part and stay around 15 reps at all times. I realize to be a good pro I need to try to keep a clean diet year round and not cheat much.

[ Q ] How do you think you looked at your comeback at the Iron Man and what have you done different for this coming contest?

My main focus for the Iron Man was conditioning. I was a dry and ripped 210 lbs which qualified me for the Olympia. That was my sole reason to do the show. But come Mr. Olympia, I will be a little fuller, around 215 lbs.

I am married to Chie, which is my beautiful and smart wife in Japan.

I like to relax; maybe a movie or something or spend time with close friends. I always try to make time for the people close in my life and I think that is important.

[ Q ] Since you qualified for the Mr. Olympia why are you doing the Europa?

I am trying to establish my name in the sport as a good IFBB Pro once again this year, since I'm now back. I think to just qualify for the Olympia is not good enough alone. I need to compete in as many contests as possible to show the world how good I am. 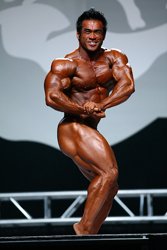 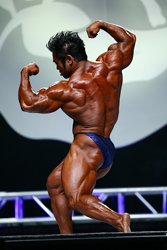 [ Q ] Do you hope to place within top 5 at the Europa or win the contest?

In my opinion, if you are pro, you should compete to win the show, not to be top 5 or something because you need to have the drive to take your body to the best level it can be. This is my job so I always want to get the biggest prize check.

[ Q ] Who do you feel will be your biggest threat at the contest?

I don't really know who is doing this show and that is not important or what I focus on when I'm training to compete. I just bring the best of me on the stage and let the judges decided that day.

[ Q ] What are you doing different for this show compared to when you trained for the Iron Man?

At the Iron Man, I was ripped and dry but a little smaller than usual. However, this time I will be a little fuller with the same condition as I was at the Iron Man.

Training is almost same but I'm eating more carbs than I did for the Iron Man and my trainer Paul has me doing some new things that he and trainer/writer Joe 'Ino Tong came up with that has kept me bigger and fuller this time. 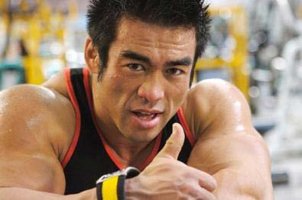 Click Image To Enlarge.
I Will Be A Little Fuller With The
Same Condition As I Was At The Iron Man.

[ Q ] What can the fans expect to see different at the Europa that they didn't see at the Iron Man?

They will see Hide, an IFBB Pro of Japan, here in America as a warrior to do damage. Yet this Hide will have more stage confidence and be relaxed while having fun. The body will be hard and detailed but bigger than the old Hide.

Joe Tong is a Certified Personal Trainer and a Registered Nurse. Joe has studied injury rehabilitation, nutrition, supplementation, and training.