Men are stereotypically notorious for bawdy locker room talk; women, body parts, certain unmentionable deeds, and normally as women we roll our eyes and pretend to be offended at the utter lack of class they must have.

Women however, may not share their immediate thoughts to everyone about sex and other formerly thought-to-be taboo issues as readily. In private though, I have found that women are far more verbal about sex; what they like and don't like, and what they are and aren't doing.

Competitive bodybuilders and fitness athletes are no different, but it all seems to revolve on how the sex, or lack thereof will affect their training, their dieting, their physique, and in the end, their placing.

Click Image To Enlarge.
I Have Found That Women
Are Far More Verbal About Sex.

Refraining From Sex Before A Big Event

This seems to be true, for a minute. After athletes abstained from ejaculation (serum test levels were tested daily) for 6 days their levels had not changed. On the seventh day only, the levels of testosterone jumped by 50 percent.

This was back down to the previous level the next (8th) day of abstaining. This seems to mean a 50 percent increase could be achieved, but for what? Abstain from sex for six days in order to have a killer leg day on the 7th? Umm, no. It's just not a usable or convenient method.

In bodybuilding, this seems to be a divided issue. Some professional bodybuilders won't have sex in the days or weeks before a show, thinking it will reduce testosterone, or at the very least take away their laser-like focus on the prize.

Arnold Schwarzenegger defied this school of thought and believed that sex before or after lifting weights and working out helped him to relax and increased his vasodilatation, and thus his training output.

It's true that bodybuilding (lifting weights that is) lowers testosterone levels (serum), but only remain slightly lower for less than 3 hours. One study found that when 10 men watched a pornographic movie for 15 minutes, their testosterone levels jumped 100 percent afterwards, while the 10 ladies rolled in at 80 percent more testosterone!1

It seems the levels remained elevated at 75 percent of the max for over 90 minutes, so you better hurry! From the other side of the coin this also seems to increase aggression in turn, and increases the likelihood one will do things such as pull the trigger on a gun.

Click Image To Enlarge.
The Arousal Itself Seems To Show A
Massive Increase In Testosterone Levels.

This shows great promise that post ejaculate workouts being enhanced naturally (not to mention pleasantly) from increasing ones sexual activities, whether with a partner or alone. It seems these tests are all bias in one way though, they are almost all performed on men.

I am hopeful that in the future there will be more studies done directly on women in fitness and bodybuilding and their sexual health. It's a running joke while prepping, that the closer you get, and the better you look, the less and less you want to have sex with anyone.

Some that are utilizing chemicals, and I won't cover that here, will not suffer these effects of training and dieting down for stage. The extreme training when in competition mode really does a number on the body, the mood, let alone the sex drive. Hungry, tired, and cold does not equal sexy for most people.

Some women report a burst of energy after sex that resulted in an orgasm, wanting to jump up and clean something, or bounce around the house; while others say they are content to watch television, relax with their partner of just doze off to sleep.

Click Image To Enlarge.
Some Women Report A Burst Of Energy
After Sex That Resulted In An Orgasm.

Men are more universal in their opinions, wanting to relax, unwind, as they are wired to calm down and become more passive and subdued immediately after sex. 3

In the less clinical sex, bodybuilding and fitness play a huge role in sex and visa versa. As a woman, I believe and have read and researched and found that achieving orgasm at least three times a week increases my "feel good chemicals" (aka dopamine). 5

This will in turn result in a more pleasant mood, less rage, less anxiety and a more positive overall outlook. How can this not result in a better workout? It has to.

When a woman is fit, and healthy and is lifting weights actively, she has increased caloric needs, increased energy, increased blood flow (this means everywhere), better sleep, regular menstrual cycles and regulated fertility. In other words, increased training, and overall fitness increases and results in a positive outcome on every activity of the body.

This will in turn result in a likelihood of a healthier body image, and therefore a healthy sexual image of oneself. It's common for women to believe they have no sex drive, or a libido issue that requires medication.

In many instances it is a direct result of a poor body image, or a more serious condition known as Body Dismorphic Disorder (BDD); where one believes that they look one way, when in reality they look completely different.

Lifting weights, losing weight, taking care of your body, will dramatically increase your confidence, your energy, your endurance and your image of yourself as a healthy sexual human being. 5 In a more direct physical sense, its common for women in classes for abdominals/core and even Pilates to report orgasm during the class movements, or increased or more powerful orgasm after weeks of training.

This is due to the strengthening and stimulation of the PC (pubococcygeus muscle) muscle, located in the pelvic floor (men have one too), that controls the flow of urine. 4 This is your best friend when wanting to increase your orgasm, or its strength; or, ahem, your core and abdominal strength!

Increasing the strength of the quadriceps, and adductors (inner thighs) will also strengthen the intensity of orgasm for women, even the breathing exercises taught in yoga have been known to cause major and dramatic increases in orgasm! The core strength also helps in a number of different positions, and in avoiding the dreaded "Charlie-horse" during an intimate moment. 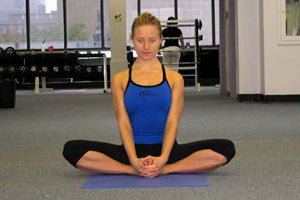 Click Image To Enlarge.
The Breathing Exercises Taught In Yoga Have Been
Known To Cause Major And Dramatic Increases In Orgasm!

The Benefits Of Bodybuilding

For men, bodybuilding offers a few more benefits aside from increased body image and self-esteem. It also increases their overall production of testosterone over a long period of consistent training and its known that men's testosterone levels can begin to decline as early as 25 years old!

The action of lifting weights, for reps, for one hour or more, increases vasodilatation throughout the body; and when a man is a smoker, or has arterial disease in his family, this can affect erections, as the lack of blood flow to the area will eventually cause impotence.

Over a long period of time and frustration, it's nice to know that it can possibly be a helpful benefit to those with that issue. Not to mention the increased strength can aid in a vast supply of new sexual positions you and your partner would both appreciate!

It seems that bodybuilding and training have a lot more affect on the body and on sex than just who has the hottest bod! Although, that is one really great benefit to being a lean, hard, super-fit person, and to being with someone who holds their body to that standard; you feel great about your body, your body looks great and you know it.

They say it's just the men that are visually stimulated first, and for the women it's mental that gets us hot. I believe a perfect combination of both is someone who takes care of their body and it shows, and appreciates all the hard work you put into yours, and lets you know often! Here's to great gains in the gym and the bedroom!

Jaime is a personal trainer and group exercise instructor certified through the American Council on Exercise.