In a fiercely tight battle between Juliana Malacarne and defending champion Dana Linn Bailey, the Brazilian Malacarne emerged victorious. Find out how it all went down!

In a gorgeous lineup full of the world's best physiques, one woman rose to the top. That was Brazilian beauty Juliana Malacarne. Malacarne looked full, balanced, and perfectly conditioned. Even the most diehard DLB fans had to admit that Malacarne was the right choice for first place.

"Seven years ago I came to the USA with $3,000, a pro-card, and a dream. Today, that dream came true," said an emotional Malacarne in her post-win interview. 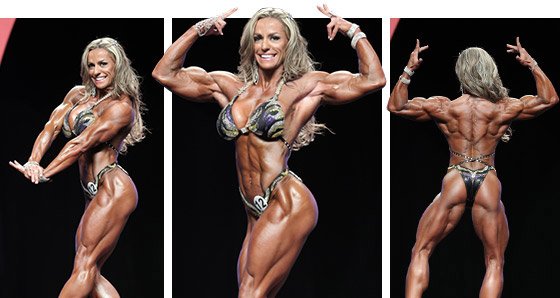 The judges made it clear that the race was between Malacarne and DLB—and they had a difficult time making the final decision. Both women performed stunning routines, and both demonstrated poise and grace throughout the entire competition. But ultimately, Malacarne's slight advantage in terms of size and shape gave her the edge.


In the confirmation round, Coppett, Bailey, and Malacarne were called first. Bailey looked stunning, as always. Her abs, hams, and glutes were the best in the class. Coppett looked every bit as good as she did last year. Although she was ultimately handed the third-place trophy, she should be proud to stand out among such an intensely competitive elite group of women.

This was Malacarne's third victory of the year, after she took home top honors at the Europa Dallas and the New York Pro. Conversely, both Coppett and Bailey took 2014 off from competition in preparation of the Olympia Weekend—an increasingly common tactic that, in this case, didn't pay off.

The other ladies in the first callout were Karina Nascimento, Sabrina Taylor, and Mindi O'Brien. Nascimento made a huge jump from 8th place last year into the 4th position, and Taylor made huge adjustments to her training and nutrition to jump eight spots up from her 13th place finish in 2013.

The physique category is here to stay. It's clear that the fans of the sport can't get enough of these awesome ladies!

Can Dana Linn Bailey defend her crown? Or will the title fall to one of this year's top contenders? Support your favorite, and watch the event live!