They might be clad in bikinis and wear constant smiles, but Bikini athletes are no less competitive than athletes in any other division. In fact, one could make the argument that the Bikini division is the most competitive and difficult division to be a part of. This year, there weren't just five or six great physiques on stage; there were 23!

Head judge Sandy Williams called the 2014 lineup "the best of any Olympia." Those few words say a lot about this division—where it's key to present a tight, composed package while trying to look effortlessly flawless in heels. Williams' words speak volumes to what a huge accomplishment it is for anyone to win Bikini Olympia, and even more about what an incredible feat it is for Ashley Kaltwasser to take home the crown twice! 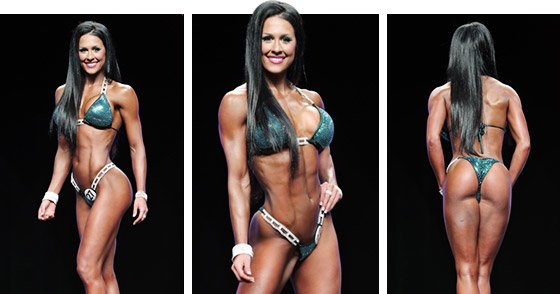 When she won last year, Ashley was a relative newcomer to the sport. This time she was under a lot more pressure for a repeat performance, but she rose to the challenge and did exactly what she needed to do to win. As she said in her post-win interview, "Last year, I just wanted to make top 10. This year I made history." Congrats, Ashley!

At her first-ever Olympia competition, Janet Layug earned the second-place spot on the podium. That's a huge accomplishment for a woman who is still a fresh face in the lineup. Janet took 8th at the 2014 Arnold Classic and 4th at the New York Pro. Clearly, she's been taking huge steps with every competition and has established herself as a force to be reckoned with. I expect we'll see much more of her. Stacey Alexander took third for the second year in a row. Although it might be a tough pill to swallow, I have no doubt it will just fuel her fire to win.

Fourth place went to Yeshaira Robles, who dropped from her second place finish at last year's Olympia. She looked incredible in her red bikini, but it's just hard to stand out next to such a large group of gorgeous physiques. India Paulino and Amanda Latona traded places this year; Latona rose a spot while India dropped into sixth. Both, however, looked about as good as they possibly could. It must be a tough battle to continually try to improve upon perfection!