Heavy Training & Injuries: An Experience Of Training Through The Pain!

If you lift hard, and you lift consistently, you have undoubtedly dealt with injury at some point. It's as inevitable as a surplus of hair gel at a nightclub. Here's my account of why I believe in training through the pain. Check it out!

If you lift hard, and you lift consistently, you have undoubtedly dealt with injury at some point. It is as inevitable as a surplus of hair gel at a nightclub. When the conditions are right (or wrong), that wrist, that lower back muscle, that nagging rotator cuff will send a message telling your tiny brain that something isn't right.

Modern day medicine and common sense tell us that we should immediately leave the gym and discontinue training at the first sign of injury. Failure to do so could result in more complications right?

What was a slight pain in the lower back region turns into being paralyzed below the waist if the proper precautions are not taken. Maybe so, but I believe that the human body is an amazing machine, and that in some instances does not need weeks of rest or an avoidance of the gym in order to heal. Sometimes all the body needs is some more training. 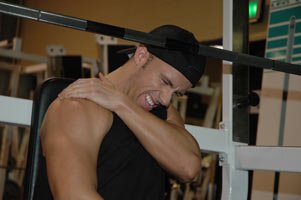 Click Image To Enlarge.
Sometimes All The Body Needs
Is Some More Training.

Training around an injury and at times even training an injured body part has become the norm for me. My training style comes hand-in-hand with injury. I train too many days each week and I perform too many compound movements with too much d@mn weight. I do not have a powerlifter's build but I love the powerlifts.

Before the hate mail starts coming in calling me a sadist and a menace to all beginner's, let me do some explaining. I am not advocating my training style to anyone. I even know that at times it's counterproductive. I can't help it though. It's the only way I know to train. It's an issue maybe I'll get to deal with in another article.

I have had plenty of experience with injury over the past seven years of what I like to think were tough, dare I say hardcore training sessions. I love deadlifts, squats, and seated military presses. I'll even throw in power cleans from time to time to increase overall explosiveness and for one h#ll of a trap workout.

I take great joy in hitting the lifts that no one else likes to do or makes excuses why they don't do them. These lifts yield great results over time. No one would argue that heavy squats will not lead to greater strength and size in the quadriceps muscles. These lifts also create potential for a multitude of injuries.

My Lower Back Injury

I can remember deadlifting bright and early one Saturday morning as was often my routine on the weekends. I was always careful to warm-up and stretch thoroughly especially in the mornings since my typical schedule was to train in the afternoons. I went through my typical progression: 135, 225, 315, all performed with perfect form. 365 was pulled off the ground with ease for 8 reps. I was feeling good and feeling strong.

As I pulled 405 for my first 3 reps, everything seemed just right. That was until the last quarter of my 4th rep. I came out of the hole strong but when the bar came up to my upper quads, I felt something in my lower back go. Not just go, but what could only be described as a muscle disconnecting from my spinal cord. 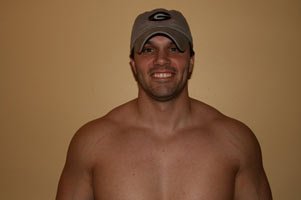 Click Image To Enlarge.
Author, Brent Moody: "I Felt
Something In My Lower Back Go".

I immediately returned the bar to the floor and tried to determine exactly what the h#ll had just happened. Was it serious? Should I go to the hospital? Should I do another set with some heavier weight?

As I cautiously unloaded the bar, I could feel the whole lower region of my back tightening. I slowly made my way to my car and drove home. By the time I got home, I could hardly move. The three flights of stairs leading to my condo door might as well been the summit of Kilimanjaro. The next morning was worse. No gym, minimal activity. Putting on shoes took on a whole new degree of difficulty. I felt like a 90-year old man.

The 2nd day after the injury I started getting the itch to get back in the gym. My back felt slightly better than it had the day before so I slowly put my shoes on and went in to train chest. I figured most of my lifts would have me lying flat on a bench so I should be able to handle it.

To my surprise, as my workout progressed, my back seemed to hurt less and less. Shoulders were up next on Tuesday and again I was careful to perform lifts that placed minimal strain on my lower back. Again the pain in my back subsided as I went through my routine. 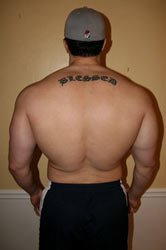 Click Image To Enlarge.
My Back Seemed To
Hurt Less And Less.

Many of you are saying that my pain relief was caused by the increased blood flow to the injured region that the training brought about and that I am stating an obvious cause and effect situation that anyone who has ever performed a weighted pull-up is well aware of. I have no doubt that this was one major aspect of the recovery.

I have dealt with a multitude injuries since and my approach has been the same. I'm pretty sure I gave myself a hairline fracture on a failed 405 lb bench press attempt several months ago. Instead of taking my whiny @ss to the doctor to hear him tell me to lay off the weights for awhile, I wrapped my wrist with tape and trained chest with hammer strength machines and gradually worked my way back to free weights.

Push your training as much as possible without further injuring yourself, but by no means quit hitting the weights. I began this little rant by stating that the body is an amazing machine.

My core belief when it comes to injuries is that, if you continue to train through the injury, eventually the body gets tired of being hurt and accelerates the healing process. If you don't take several weeks off, your body realizes that it's not going to get a break and if it wants to survive then it better get its @ss in gear and quit hurting!

My recommendation for dealing with injury: let it drive you to train harder, through the pain and through the fear. Your body might surprise you with its response.

My name is Brent Moody and I am a powerlifter. My articles deal mainly with overcoming many of the hurdles one faces while trying to train...