Midlife Crisis Management: Slashing Body Fat From 15 To 4% After Turning 35

It’s never too late to shape up. Just ask Jim Flanigan, who took his body fat from 15-to-3 percent after hitting his mid-30s!

I started lifting at age 19 (I was 126 pounds on a good day and had always been on the small side). Nothing serious, just to be fit; I never thought I was "good enough" or would be "big enough" to compete.

At age 33 I regretfully took three years off due to some personal issues and went through what I call my "mid-life crisis." At age 36 I had had enough of being sick and tired and looking horrible all of the time and decided it was time to get back into the gym, which was January of 2006.

During the summer of 2006 after making good progress I had individuals make comments such as "you should compete" or "are you a bodybuilder?"

I decided to attend my first bodybuilding show to see what it was all about, sitting in that chair watching the competitors had my mind racing and I was HOOKED ... all I could think about was how I had to be up on that stage.

So months after seeing this show and trying to figure out how I would accomplish the task at hand, I began my journey to the stage in early 2007 and never looked back! 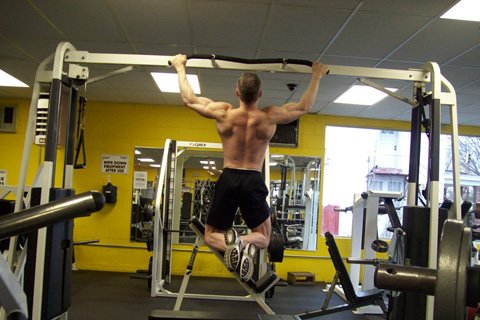 Click To Enlarge.
I began my journey to the stage in early 2007 and never looked back.

Once you make up your mind to do something there is nothing you cannot accomplish, this is a rule I live every area of my life by. Having support of those who truly care about you around you is a key factor in succeeding; without that support you are just fighting an uphill battle.

I followed the old school basics; eat, lift, sleep and grow ... this pretty much sums it all up for me. I had to make a solid commitment to myself; otherwise I would never have realized my true potential.

Training for my first show I really had no one to guide me, I utilized online tools such as Bodybuilding.com, YouTube for my posing and read magazines such as Muscle & Fitness and Reps for any tips I could find.

I soon learned to gravitate toward people in the gym that had the same mindset and that were positive in nature.

So many people have an ill misconception of how a bodybuilder really is, they can look intimidating for sure, but if you are willing to put in the effort and have a no-nonsense attitude and show you are 110% committed to your goal, many are willing to lead a helping hand and offer advice.

In the fall of 2008 I decided it was time to pick a show for 2009, as terrified as I was, I had to have that final goal to conquer, so my sights were set on a show in April 2009. With the idea in my head that "what if I really suck on stage" I decided to choose a show 20 minutes from home as a safety cushion.

My diet was all over the place, but I knew enough I needed to consume smaller frequent meals and the meals had to be of quality.

The Tuesday before my show I received a phone call from the promoter telling me the show was being cancelled, I literally fell apart, all of the work I had done was for nothing. But someone was looking out for me, as fate would have it there was a show being held in Columbus the same day. 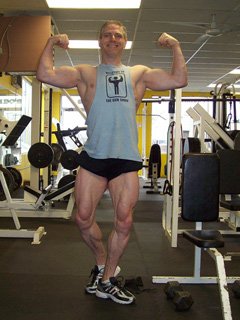 Click To Enlarge.
I soon learned to gravitate toward people in the gym that
had the same mindset and that were positive in nature.

I made some phone calls and talked to Rich Lauro who was promoting his very own show for the first time called the INBF Natural Buckeye Classic. They always say you never forget your first time experiences and this first time could have not been any better, not only did I have an amazing time and met some incredible people, I ended up winning the men's open lightweight class at my very first show.

I was bit by the bodybuilding bug in a major way and began working toward my next show in October 2009, the NPC Monster MASH Natural. Training for the MASH was a challenge and I tried to follow the same principles as I did for my first show. Many people are willing to offer advice when you are prepping for a show and sometimes that advice is not always the best for you.

I let too many people get in head concerning my diet and cardio and training. I came in not looking my best for the MASH, but ending up taking 4th in the men's open lightweight class out of 10 guys. After this show I decided I needed help if I was going to continue with competing.

Training with the weights is a no brainer for me, I have always been pretty in tune to my body, however diet was my Achilles tendon, and I was clueless. I was fortunate enough to have the opportunity to meet and work with a local individual named Jason Theobald, who was the owner of Natty Nutrition.

My opinion of Jason is that he's a genius when it comes to setting up a contest diet, he really explained to me how I needed to eat to get the most from my food for my body type; as Jason puts it I have the "metabolism of a humming bird". I began work with Jason in January 2010 for two shows in the spring of 2010.

Jason taught me a lot about my body and that there is no "one diet fits all". I was consuming 3500 calories, doing no cardio and losing a pound plus a week all way up to the shows. Come show time I looked my BEST ever!

I am now working toward competing in the men's over 40 master classes and come in at the higher end of the open class in the spring of 2012, I honored to be able to step up on stage now as a "master" as these men inspire me beyond belief. 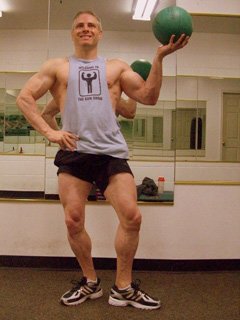 Click To Enlarge.
Training with the weights is a no brainer for me, I have
always been pretty in tune to my body.

Morning With Meal 1 & Before Bed:

I'm always changing my workouts to keep my muscles guessing and to keep my workouts interesting and challenging. As I say you have to train smart, it is not always about how much you lift, but how you lift it.

Due to my metabolism, cardio is rarely a part of my workout.

If growing older has taught me anything, it would to always believe in yourself, NEVER give up and to always strive to be your personal best. If you have a dream you need to follow it, if you fail at least you know in your heart you tried, if you succeed you flaunt it in all the "haters" faces ... a win-win situation.

It took me 35 plus years to realize this bit of wisdom so never let anyone tell you that you cannot achieve something.

Always look at each new day as a gift. Never be afraid to give or accept a compliment. Never be afraid to move out of your comfort zone and seek help and advice from positive sources, I would have regretted not taking the steps to work with Natty Nutrition on my contest diet, it was one of the best decisions concerning my bodybuilding.

Also never be afraid to change things up and try new things, or even a new gym (I recently joined WNBF Pro Jim Collins' gym called "Gymbos" and my progress has been unbelievable, the place is full of positive energy). I cannot stress enough how important it is to have positive support.

It is a great reward to know that in a way I have become a role model for men and women of all ages and when they find out that I am 40 realize that it is never too late and that nothing is impossible if you want it bad enough.

Always look to your future and focus on your present and just use your past to learn from and you will exceed your goals and dreams beyond anything you can imagine.