The Art Of Boxing: Skills, Drills And Benefits!

Boxing has become a popular sport for many. It's not surprisingly because it provides the best workout and challenges many of our senses and capacities. Try it, you won't be disappointed.

One of the world's oldest, and most celebrated sports, boxing, has proven to be popular among many people, for a variety of reasons. From its emergence in ancient Greece, through early 18-century England where it was considered the "gentle" art of self defense (albeit a bare-knuckle form of defense), and an introduction of the Marquess of Queensbury rules (1866; scoring system that required gloves), boxing has continually been refined and perfected.

In the 21st century, professional boxing attracts major sponsorship deals and makes fighters millionaires. Amateur boxing is also growing exponentially. Those looking for a challenge are attracted by the allure of the benefits to be realized. Indeed, boxing is increasing in popularity almost daily, with movies like "Million Dollar Baby" and massive pay-per-view events attracting millions of viewers.

Boxing has become a global phenomenon with tremendous cross-over appeal. The fitness industry has latched on to the boxing popularity with box-out classes and the like. Why has boxing become immensely popular and how does one become proficient at its practice? The following article will shed some light.

Boxing provides many benefits and challenges. For example, it has the potential to turn lives around by providing focus and an outlet for pent up aggression. Boxing's greatest benefit might be in the training and preparation needed to reach the fighting level. Indeed, the actual fighting aspect need not be emphasized to realize boxing's many benefits, which include: 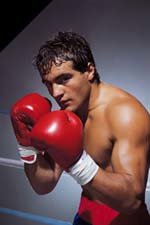 The typical boxing training session stimulates all muscle groups, and provides the perfect combination of aerobic (with oxygen) and anaerobic (short-burst, without oxygen) exercise. Indeed, the boxers' workout is guaranteed to get anyone into the best shape of their lives.

To perfect the basic boxing skills while developing the stamina to survive three, 3-minute rounds of sparring (actual fighting in a controlled gym-setting to prepare for the real thing), one needs to be supremely conditioned and strong enough to throw powerful punches from Round 1 through Round 3.

Exercises are shortened and combined to form a circuit or performed independently over a longer period. In short, boxing improves reflexes, endurance, flexibility, coordination, speed, power and cardiovascular fitness.

A sample boxing workout (about one-hour).

Possessing the skills to look after yourself gives you a significant amount of confidence. Contrary to popular belief, boxers typically do not seek confrontation. Their skills and confidence convey an inward belief that there is nothing to prove. If you have nothing to prove, you will be less compelled to prove it.

However, if boxers needs to protect themselves in a self-defense situation, they will be more adept at finishing things quickly and cleanly, due to heightened confidence levels and skill.

When someone is confident in the ability to defend themselves physically, this often translates to a psychological benefit of self-contentment and peace of mind.

Boxing is the ultimate sport for countering stress, in my view. The combination of strength training and aerobic work provides the best of both worlds in terms of feeling a muscular pump and stimulating the cardiovascular system - both of which enhance psychological well-being.

After a hard day, hitting the heavy bag for 5-to-6 rounds serves as a tremendous stress release. Boxing (particularly concentrating on the focus mitts) enhances the ability to relax, which helps keep the boxer calm and poised under pressure. In this sense, boxing might help one to manage their life more efficiently.

Boxing allows for a direct competitive experience between to people in a controlled setting. Depending on the athletes's disposition, this can be a great self-esteem boost.

Full-contact sparring, which is optional in many boxing classes, provides the perfect platform to refine fundamental boxing skills, and a great test of physical capability and courage.

Before engaging in any form of boxing training, the right equipment must be available for both safety and performance reasons.

Stance in boxing is vitally important as it sets the platform for all basic punches.

The main stance in boxing is the common orthodox stance, which is used when sparring or engaging in bag work. To get into this stance do the following:

Note: those who naturally lead (jab) with their right hand are called southpaw fighters. To change to southpaw place right foot forward and turn body slightly to the left. 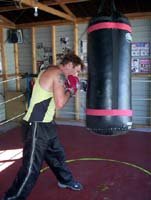 Footwork is equally essential. Punches directed at one's opponent will not land if one cannot efficiently get close enough. Similarly, evading the opponents punches will be all the harder if footwork is lacking.

The key with footwork is to ensure the body is centered and balanced at all times and that fighting stance is maintained. With footwork, the focus should be on moving backward and forward, lateral movement (moving left and right) and pivoting.

When moving forward, push off the back foot and step forward with front foot half a step. Follow front foot with back foot in a shuffling motion to arrive back at the fighting stance. 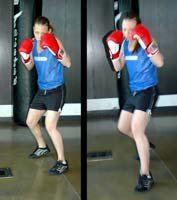 Move backward only when absolutely necessary and try to fire punches while retiring. To move backward, push off with the ball of the front foot, while stepping back with back foot one half step. Follow with front foot, back to fighting stance.

Lateral movement involves moving/pushing either left or right to evade ones opponent. To move left, push off from the ball of right foot while left foot moves one half step to the left. 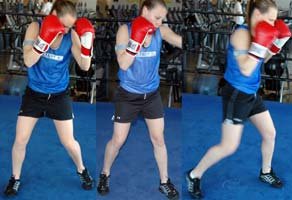 Follow with the right foot to achieve correct fighting stance. To move right, push off from the ball of left foot while moving right foot one half step to the right. Follow with left foot.

Pivoting enables one to quickly change the angle of approach to effectively counterpunch their opponent. Begin by shifting weight to the ball of the front foot; then push off with the back foot to pivot the front foot a quarter turn to the left or right. This should throw opponent off balance and open them up to attack. 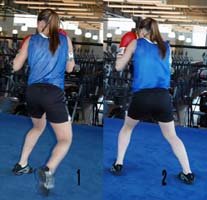 Before even contemplating sparing, four basic punches need to be mastered: the left jab, right cross, left hook and left uppercut. These punches are designed for the orthodox stance fighter.

The southpaw will simply perform these punches with the opposite hands, leading with the right jab. These punches are the bread and butter of boxing and, once mastered, can be put into combinations and used in a sparing context. Remember, in order to successfully learn the following punches, stance and footwork need to be perfect.

The most used punch in boxing is the left jab, making it the most important to master. The jab is used primarily to keep ones opponent a distance; to set them up for one of the power shots: for example, the right-cross. 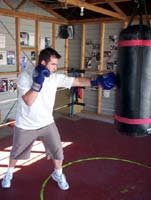 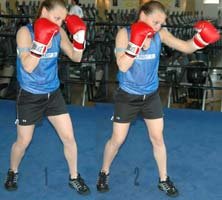 Although the jab is not considered a power punch, it can cause considerable damage over the course of a fight.

To Perform The Jab

The right cross is often referred to as the most enjoyable punch to throw. It is thrown with the right hand - a natural movement for most. A large degree of power can be transferred through the right cross - it is most often responsible for many of the knockouts seen in a boxing match. 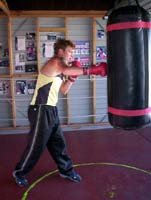 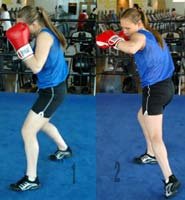 The right cross should be utilized behind the jab, as a knockout punch, rather than being used too often, which can lead to overbalancing (boxers put themselves slightly off balance when the right is thrown) and exposure to a counterpunch.

To Perform This Punch

The left hook is typically the hardest punch to master. It is thrown at an unnatural angle and requires a great deal more motor coordination.

The hook works best when fighting on the inside (very close to the opponent). 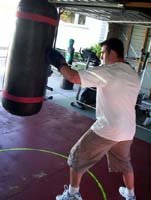 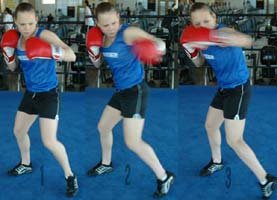 It is devastating punch which twists the opponent's brain inside their skull and often results in a knockout - Heavyweights David Tua and Mike Tyson are masters of this punch.

To Perform It Correctly

Uppercuts are also used when fighting on the inside. The key with the uppercut is to throw it in a fixed position, from fighting stance. The uppercut can be delivered to the body or head. 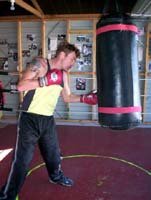 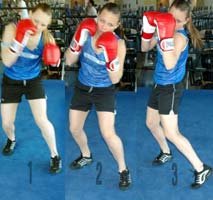 Note: When delivering any of these punches always remember to breathe correctly. Exhale with a short wheeze upon delivering each punch. Between punches, breathe normally in a controlled fashion. Also, when punches are thrown, snap back to fighting stance rather than leaving the punches hanging and always keep non-punching hand up to protect head from a counterpunch.

Putting punches into combinations will help the trainee to master them more effectively. A good boxing offense includes a multitude of punches fired in quick succession rather than one or two thrown sporadically - when it comes to punching, more is usually better.

Some basic combinations include:

Once all required boxing skills are developed, and stamina is increased to a high level, sparring is advised for skill refinement and excellence in execution.

However, sparring is largely optional and should not be enforced - the training required to get to the sparing level is a boxing benefit in itself. Sparring headgear, sparring gloves, mouth guard and groin protector are mandatory.

Initial sparring should begin slowly with both fighters practicing a few basic punches, before the more advanced, no-holds-barred stuff. Remember to keep the guard up, try to relax and above all don't get angry, but remain composed.

Punches will flow better and recovery will occur faster if the fighter remains as relaxed as possible.

As mentioned, boxing has become a popular pastime and serious sport for many, and not surprisingly provides the best workout and challenges to many of our senses and capacities.

Becoming adept at boxing will enhance confidence, self-esteem, and all levels of fitness. Try it, you won't be disappointed.

Click Here To Learn More About The Benefits Of Boxing...