Body Transformation: Barb May Crushed The Scale With Muscle!

Barb's weight used to fluctuate uncontrollably. Now she has total power over her body and mind. See how she lost 46 pounds and 22 percent body fat!

I competed in 1990 but fell apart after two pregnancies, college, marriage, divorce, and struggles with bipolar disorder. I reached my heaviest weight while I was working as a pharmaceutical sales representative for five years. I still went jogging, snowboarding, hiking, and skiing, but my weight fluctuated constantly.

In 2012, I found out I have the BRCA2 gene mutation that gives me an extremely high risk to develop breast and/or ovarian cancer. I opted for a preventative hysterectomy and double mastectomy in August and October 2012. I became discouraged after reading articles that said I was doomed to fatigue and a larger waist size after going through menopause, which I had no choice about after my hysterectomy.

I went through body image struggles and was told it would be difficult to bounce back. I was a big consumer of frozen meals, shopped the inner aisles at the grocery store, and felt like I didn't have time to cook. Then I was told about a documentary that broke down the bad effects of junk food and the good effects of whole foods.

On June 3, 2013, I began my whole-food, clean-eating lifestyle. Within days, I felt better and started running again. At first, it was challenging for my family to see it was a good thing, but they saw the benefits over time. A few weeks later, I started the Jamie Eason 12-Week LiveFit Trainer and finished it.

I challenged myself to get lean so my husband could take photos of me that I could send to companies like Bodybuilding.com with an article of my story. In November 2013, I decided to compete in my first NPC figure competition, placed 7 out of 10, and won the Most Inspirational Award.

After watching a documentary on how people harm their bodies with junk food, the lights came on for me. I saw that I was cheating myself by avoiding whole foods and changed the way my family planned, shopped for, and cooked food. We started shopping on the outside aisles of the grocery store.

Getting nutrition dialed in was the key for me, especially now that I'm trying hard to gain muscle mass for my upcoming competition. I have to be smart and careful to gain enough for growth, but not too much that I have to lose excess body fat during contest prep.

There are days when I have moments of weakness, but then I remember the negative effects of addictive food. I get my workout inspiration from Bodybuilding.com and fit people at my local gym or on Facebook. I change my workout routines often to challenge my body and keep from getting bored.

It was a steep learning curve to understand nutrition. Learning how to feed my body to meet my goals and tracking my macros helped immensely. Tracking my meals is the only way to stay on track because my mind likes to conveniently forget occasional snacks. 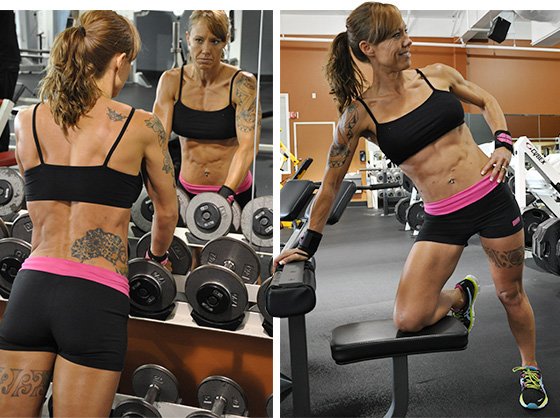 "Find what motivates you and use it."

I will have a blast skiing this winter and training to compete in figure in May 2014. I'm going to start working with a trainer who specializes in bodybuilding so I can stay on track. After that, I'm going to focus more on hiking and backpacking with my husband, and supporting my 15-year-old daughter who wants to get into powerlifting. I would like to study and get my personal trainer certification someday. My long-term goal is to keep competing into my 50s.

Be careful listening to the public regarding what you're capable of and what your limits are. In most cases, articles are written based on social norms, which are predominantly unhealthy. Don't let people say that you look good enough if it's not what you want. Do what's right for you and your goals. Don't hang around people who drag you down emotionally or physically.

Find what motivates you and use it. I like to post photos of what I want to look like on my phone for extra incentive when I'm tempted to eat doughnuts or cheeseburgers. If it was easy, everyone would do it. The fact that you're doing it makes you exceptional.

I love the huge variety of workout ideas from Jamie Eason, Lee Labrada, and Jay Cutler. The articles on nutrition, posing, and contest prep are awesome. BodySpace gave me a tool to visualize my goals and make a clear path to achieve them.