There was never a doubt. On a historic night, Flex Lewis blew away the competition to win his third consecutive 212 showdown!

The 212 Showdown prejudging certainly produced some great discussion points, perhaps none as shocking as the absence of David Henry from the top callouts. But the real story—just as it has been for the last two years—was James "Flex" Lewis versus everyone else.

In the end it was a two-horse race, with Lewis vying for a three-peat and challenger Eduardo Correa vying for his first title in five attempts. Flex brought a great package with a much-improved back and his textbook stellar conditioning, but Correa was up to the challenge. After prejudging, I learned from a source that the judging was quite close, and it would likely come down to the final pose.

All of the competitors seemed to tighten up from the morning show, with the exception of perhaps Correa, who seemed maybe just a hair softer. That said, he was still one of the most conditioned men onstage. 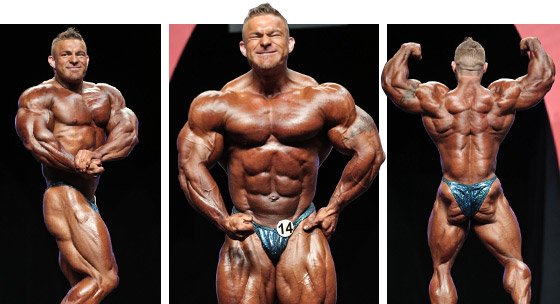 Flex got a bit of a scare from Correa, but in the end his combination of size, symmetry, aesthetics, and conditioning were enough to overcome everyone. He will need to continue to make improvements like he did with his back in order to hold off challengers like Correa.

In a post-competition interview, Flex put to rest rumors that he would be switching to open class, saying that he wants to "create a legacy." This is good news for 212 fans, but it also means Correa will have to bring his A-game next year if he hopes to grab the win.

Flex's victory was even more impressive given that, as he admitted onstage after accepting the trophy, he has battled stomach illness this weekend. Nevertheless, he was clearheaded enough to know that his victory had special meaning tonight. "I wanted to win this Olympia more than any, ever," he told the crowd. "We're all part of history."

Don't act too surprised. After all, this is a man who has never finished outside of the top five in his four previous trips to the Olympia stage. Correa pushed Flex to the edge, but in the end fading from prejudging to finals appeared to cost him a shot at the title. It was still an amazing showing and he will likely be challenging for the title for some time.

Say whatever you want about his aesthetics. Jose is freaky as hell and always comes in as lean as possible. His is a well-deserved third-place finish.

Hide's 212 Showdown debut had much fanfare, but in the end it came up a bit short. He was slightly flat—unlike the incredible conditioning that he brought in the past as an open-class competitor—and that cost him a spot in the top three.

A combination of great size and conditioning moved Abbaspour into the top five. He has some aesthetic problems, but he will likely be a perennial top-five finisher if he can keep bringing the conditioning he showed tonight.

Clark has great muscle bellies and symmetry, but to really make a dent into the top three he will need to nail his conditioning better than he did this year.

Flex Lewis continued to set the bar in 212 prejudging. What happened in the other positions and callouts is the story of the day!

Jeremy Buendia took his body and his career to the next level, unseating Mark Anthony Wingson to earn the 2014 Men's Physique Olympia crown. Here's how it went down!