Jeremy Buendia took his body and his career to the next level, unseating Mark Anthony Wingson to earn the 2014 Men's Physique Olympia crown. Here's how it went down!

The Olympia Weekend's Men's Physique category returned in full force today, showcasing a powerhouse lineup of familiar names and bodies, with many holdovers from last year's inaugural competition. As with the women's division, the 18 guys who lined the stage showed that the division is truly coming into its own both with the standards that it sets and the results it brings. Everyone came in well-conditioned but not too dry, muscular but not gigantic, and perfectly symmetrical from shoulders to board shorts.

Although all the men on stage looked like they belonged on the cover of a magazine, Jeremy Buendia's insane V-taper and excellent front pose brought him the trophy. Buendia obviously used what he learned from his runner-up finish last year to improve upon his already-great physique. 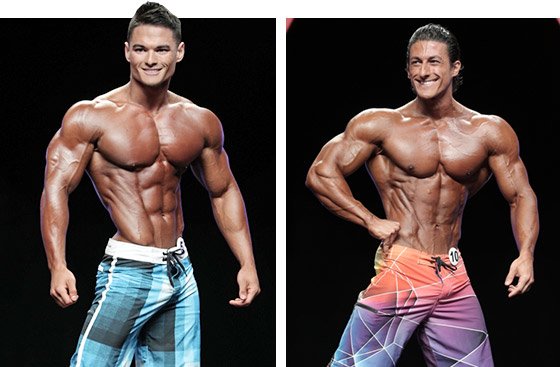 "It was a long year," said Buendia to emcee Bob Cicherillo. "Coming off last year's second place, I had one thing on my mind, and that was to win."

During prejudging, the first callout brought Matt Acton, Jeremy Buendia, Sadik Hadzovic, Steve Cook, Jason Poston, and Mark Anthony Wingson to center stage. The judges took plenty of time reconfiguring the competitors' positions so they could get a look at each guy in side-by-side comparisons.

Hadzovic looked fantastic, as he always does. The competition between him and Buendia was tough, as the two were placed next to each other in the center for the majority of the round.

Cook also looked great just a month out from his victory at the Dallas Pro, but he couldn't match the broad shoulders and small waist that Hadzovic and Buendia offered. Although he—and the crowd—may not have been thrilled with that decision, it was a big improvement from his 8th-place finish last year.

Poston and Acton both brought great packages to the competition. They've both competed really well this year, and with each having a pair of IFBB victories to their name since last year's Olympia, expectations were clearly high. Poston's finish was two spots better than he earned last year, whereas Acton slipped down a place. Wingson—last year's champ—managed to squeeze into the first callout, but was ultimately on the outside of the top five looking in.

Michael Anderson, Anton Antipov, Tyler Anderson, Tory Woodward, and Xavisus Gayden came forward for the second callout. All five of the guys presented physiques that could easily have won other shows. But this is the Olympia, and only the absolute best make it to the top tier.

After a long confirmation round, the judges brought back Buendia and Hadzovic for another round of side-by-side posing. That one last round gave the audience a peek at who the judges would put in the top two positions. After a few tense moments of anticipation, the judges called out Hadzovic for second. Buendia took his honors, with big cheers from the crowd.