The Classic guys put on an incredible show tonight! Get the details about how Wolf ate up his competition and stood in victory.

As the night began, the anticipation was palpable: would the winner be a major superstar like Dennis Wolf or Branch Warren? Or would a relative young gun like Shawn Rhoden or Evan Centopani take the prize? After the dust was settled, and every muscle fiber in each athlete was pumped to the max, one man was left standing as the 2014 Arnold Classic Champion. His name is Dennis Wolf. 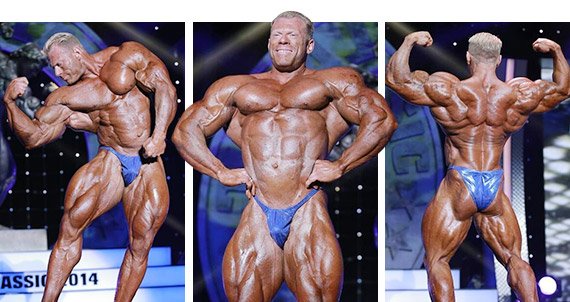 "The Big Bad Wolf" flew to Columbus to win. It was clear when he stepped on stage he would accept nothing else. Finishing in second place twice made him hungry for the title. He knew what he needed to do to improve from the rear and he did just that. The crowd impressed with every back pose he hit and howled in approval.

Although he usually carries a lot of size, he seemed even bigger tonight than he did at the 2013 Olympia. His presentation was the best I've ever seen out of him. He definitely deserved this award and will forever remember 2014 as the year he finally placed first at a major event.

The 2012 Arnold Europe winner brought it. Shawn has been compared to four-time Arnold champ Flex Wheeler multiple times, and for good reason. He seemed to get tighter as prejudging went on and performed well during finals. His side poses showed off the size in his lower body and his trademark symmetry. He may have been better conditioned at last year's Olympia and his calves could have been a little better—but I might just be nit-picking. There is no doubt Shawn will be a top contender in every show he enters for the next few years. 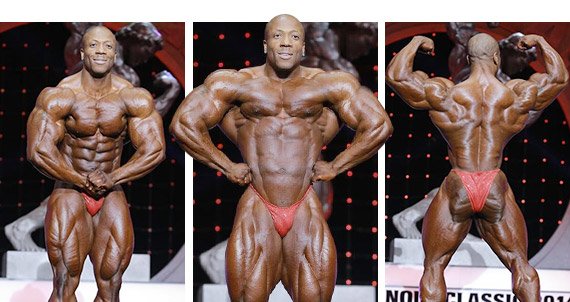 Coming in at around 260 pounds, Cedric is a big boy. His size is impressive, but so is his symmetry. He's also a fantastic poser, which gives him a clear advantage. Cedric actually used quite a few of the signature poses that Arnold Schwarzenegger made famous. He looked even better tonight than he did during prejudging—that's not always an easy thing to accomplish! He has a wide back but I would've liked to seen a little more detail and he may need to add a little size to his upper chest. To be in the top three is a huge win for Cedric. Hopefully he'll keep this momentum going through the season.

The "Dominican Dominator" wanted to take his second title here in 2014. Although he didn't achieve his goal, he put on a great show. His combination of gorgeous symmetry and fantastic posing is always entertaining. His chest and shoulders looked incredible. What held him back this year was his legs. They're still a little smaller than they should be and he also looked like he was holding some water in his lower back. I also think he'd benefit from putting more size on his arms. Overall, Victor should be proud of this fourth-place finish.

Hailing from Connecticut, the cold of Ohio didn't affect Evan in the least. He showed up at almost 265 pounds, brought a much-improved chest, and performed a great posing routine. Many fans and bodybuilding experts believe that he is the future of the sport—Evan has the size and thickness to prove them right.

He finished out of the top 10 at the 2013 Olympia, but the improvements he's made since then were obvious. Evan can work on adding some detail to his hamstrings and size to his legs. He'll do even better later in the season.

Big Branch impressed everyone in the crowd with his graininess, intensity, and always-stellar legs, but the judges didn't see enough to put him in the first callouts during prejudging. He's stood victorious in Columbus twice, and has five Most Muscular trophies to his credit, but his conditioning wasn't quite up to its normal standard tonight. He definitely looks better than he did at last year's Mr. Olympia, but he needs better detail from the back and a little more size on his biceps. He will have to win to qualify for the Olympia, so we'll more than likely see him on stage again this season.

The Rest Of The Lineup

Fred likes to train heavy, and it shows in his thick upper body. Every time he ventures away from his home state of Delaware, he brings the heat. He wowed the ladies in the crowd with a dance-heavy posing routine complete with a moon walk between poses. Despite his great show, he just doesn't have the overall size to compare to the big boys in the lineup.

The 2008 NPC National Champion showed up to Columbus for his second Arnold Classic event looking to do damage. Sadly for Nunn, there were just too many big names who brought their "A" game. He had good arms, but lacks the necessary chest thickness. He could also use more overall size and more detail in the legs, especially in is glute-ham tie-in. It's early in the season, so Ed may still make it to the victory circle in another show.

The "X-Man" is the oldest athlete on the stage. He represented it well considering he could also compete in the Master's division. Toney is near 50, but looks like he's under 40. Tonight marked his 9th Arnold Classic competition and this season is his 19th as a pro. All these years in the game and he still has a side chest pose that would make even Arnold jealous. Unfortunately, he didn't bring as much size as he has in the past and seemed to have trouble maintaining conditioning throughout the competition.

Oh my quad! Ben's legs were by far the best part of his physique, but he also had good detail in the back. He worked with Chad Nicholls to improve his runner-up position from last year, but came up a little short. He needs more overall biceps size because it can be tough to see his peaks from behind. His chest could also benefit from being thicker. He wasn't as tight he was last year either. He is a popular bodybuilder and his fans in Columbus were pleased with his effort. I think an Arnold Classic title is probably in his future.

There are two things you can't be in a lineup like this: soft and smaller. Brandon is a big guy, but he looked smaller and less conditioned than he usually does. He did entertain the crowd with his posing routine smoothly going from one pose to another, but there isn't a "top poser" award. He did have good arms, but they overpowered his chest and shoulders. His Arnold Brasil title proves that he has the ability to win, but tonight was just not his night.

Thanks for checking out all of the coverage for the Arnold Sports Festival here on Bodybuilding.com! We hope you enjoyed the webcast and reviews. Please share your thoughts and opinions in our comments section.

This year's Arnold Classic continued its tradition of bringing the very best to the stage. After prejudging, it looks like Dennis Wolf and Shawn Rhoden will duke it out for the trophy!