Congratulations Temple Gym of Birmingham, United Kingdom! We are proud to announce a new gym of the month award where we will be awarding the best of the best! See why this gym was started and why their motto regarding 'Hardcore' remains unchanged!

Temple Gym has been selected as our Bodybuilding.com Gym of the Month not only for its contribution to packing muscle mass onto budding bodybuilders frames like passers by throwing chunks of diced meat onto starving skeletons, but also for living and breathing a dying motto of "keeping it real" and "keeping it hardcore." 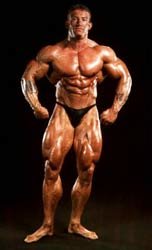 The monstrous proportions of its owner, 6 times Mr. Olympia Dorian Yates emerged from this dungeon where he was hidden from the outside world to dominate and obliterate everything in his path before returning for further evolution hibernation, thus being knighted "The Shadow."

Since Yates's Olympia reign, many top amateurs and pro's have become champions by using the eerie atmosphere and dominating tools that conjures "hardcore" into every breath a visitor or member takes on conclusion of their first visit.

Gyms as blue collared as this are a dying bread but the humid walls within the underground confides of Temple Gym beat a pulse and echo screams unmatched by anywhere else in the world.

We caught up with its owner Dorian Yates to find out why this small cellar is such a gym that people travel all over the world to punish themselves in.

Please be advised, enter at your own risk.

Q
How did the gym start and why did you decide to begin Temple Gym?

I had my gym in Birmingham, the original Temple Gym. I opened that 20 years ago now, in 1987. In the building before that, there was either a gym or a martial arts center since the mid 60's, so it was a gym I was training at early in the day and it closed down for various reasons, so I took it over with a partner, back in '87, and eventually became 100% owner.

How many franchises are there currently?

We have one in California, one in Vegas that's opening in May, there's two in England and there's several in the pipeline now as well.

Do you have any top trainers and why are they so good?

There's a couple of guys working there, my son's one of them. Obviously he's learned a lot from me, and he's fully qualified as well in personal training and injury management. I guess he's the top one for me.

What special services do you provide?

Well, I'm just talking about my gym because that's the one that I run personally. It's a very small gym compared to gyms over here in the UK; it's only 3000 square feet and it's packed with hardcore equipment. Some gyms say that they are hardcore but the equipment is falling apart, personally I don't believe that is hardcore. 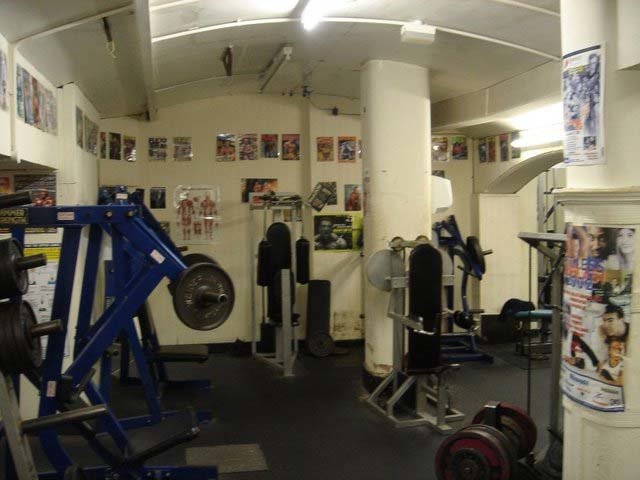 There's nothing fancy in our gym, we got the minimal amount of cardio, some changing rooms and some showers, but apart from that it's just all the equipment; is hardcore and functional. We have a lot of Hammer Strength, we got a leg press from Icarian, we got some Flex equipment and dumbbells up to 220 lbs. That's what people come here for: serious training, image and atmosphere.

There's a great atmosphere in the gym, it's underground, it's in a basement and when you walk down there you really feel like you want to train.

Not a lot. I've done a few rows and shrugs with them and a couple of people have as well.

Who are your most notable members?

There's myself, Ernie Taylor, who got to the top 10 of the Mr. Olympia, he trains at Temple Gym as well and there's a few guys that compete on the national levels in the U.K. 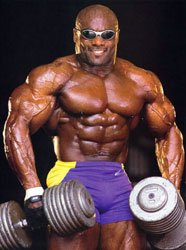 Can you provide me with a member's success story?

There's all different levels of success. We got Ernie Taylor who went on to be very successful as a pro, and in the Mr. Olympia. We have a member that was 300 lbs and now he is 200 lbs. He did that in a period of 8 months. So that's a great achievement.

We got a member that is in his mid to late 60's and he trains people and is in better shape than most guys that are in their 20's. There's all kinds of different success stories. Not all our members are competitive bodybuilders, but they tend to succeed and they're there just because of the atmosphere and the assistance they can get from the other members. It's like a family atmosphere.

A 100 lbs over 8 months seems like a great success story!

Yeah, it's a great success, and that's what you get at the gym; you see other people succeed and you're inspired to do it yourself. It's a positive atmosphere.

What are your future plans with the gym?

We're expanding in the United States, because a lot of people are interested, so we're probably going to see a few more pop up over the next year or so. We have interest from Mexico, India, and Dubai as well.

Are you going to expand further in Europe?

Yeah, we're expanding in Europe, but we do seem to have more interest in the United States and other countries. We do have franchises available in Europe, and I think we got one opening up in Spain.

What attracts potential members to walk through your doors?

Bodybuilding is not as huge in the U.K. as it is over there [in the U.S.]. A lot of people that come to the gym wouldn't know who I am or what the Mr. Olympia is, but I think they come here for the serious atmosphere, and the advice that they can get. 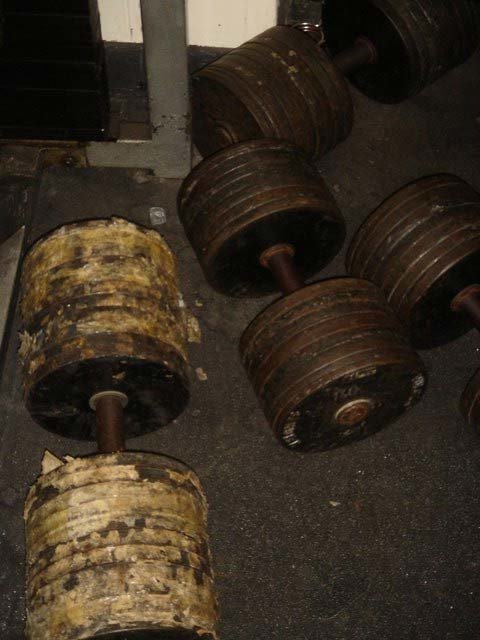 There's a lot of big fitness centers in the U.K., but members don't get the correct advice and instruction that we're giving in our gym. We provide more of a personal touch. People don't come to socialize or sit in the Jacuzzi. We provide for people that want to make progress and take their training seriously.

What is the funniest/weirdest exercise you have seen performed in your gym?

There's always characters in the gym. We had this one guy that used to do every exercise in the absolute worst form, and the strange thing was that the guy never got injured. He had a habit of putting down newspapers on the benches before he trained, and no one could figure out why. He was doing that, I'm assuming, because he didn't want any contact with people's sweat, but then ended up with newspapers all over his shirt, so it wasn't exactly a great idea.

What is the funniest question you have been asked by a potential member?

I would always get questions or statements from people who used to come down to the gym and asked to get big, but they didn't want to get too big. They wanted to attain the same proportions or something as me, but not much bigger than that. I would always tell them don't worry about it, it's not going to happen by mistake.

That's pretty funny. Do a lot of people know who you are when they go to your gym?

A lot of people from the States and a lot of people on vacation. Then we have other members who probably don't know too much about who I am. 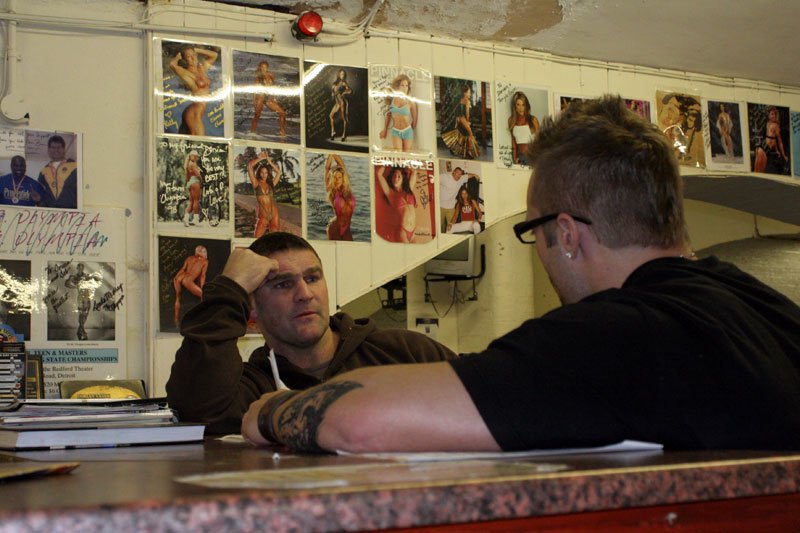 Do you believe that you could've won the Mr. Olympia training in another gym?

Well, I don't know. If you've got all the right genetics and the drive you could probably do it anywhere, but I think the gym had a bearing on my success. I always had my best workouts in there. I didn't really train anywhere else so it's hard to say.

What attracted you to stay at Temple Gym for your Olympia domination? Why not relocate to LA to train at Gold's in Venice?

I considered it a few times but the gyms in LA are very distracting, it's like a circus. I like to go in the gym and concentrate on my workouts. There's a lot of distractions in California, not just in the gym, but also outside the gym where people wanted to pull on your time.

I prefer to keep myself isolated and staying in the U.K. helps me do that. In my own gym I'm more or less training in private so that also helps.

What disadvantages were there in regards to preparing for the Olympia at Temple Gym?

I don't think there were any limitations because I had all the equipment and if I needed something I would just get it. It's my gym, so if I needed bigger dumbbells or a piece of machinery I'd get it. So there were no disadvantages really.

Did gym members ever bother you whilst you were training? If so, what was your reaction?

Generally not no, because everyone respected what I was doing and at that time of day there weren't many people training there anyway. People tend not to bother me when I'm working out because I'll make myself unavailable. 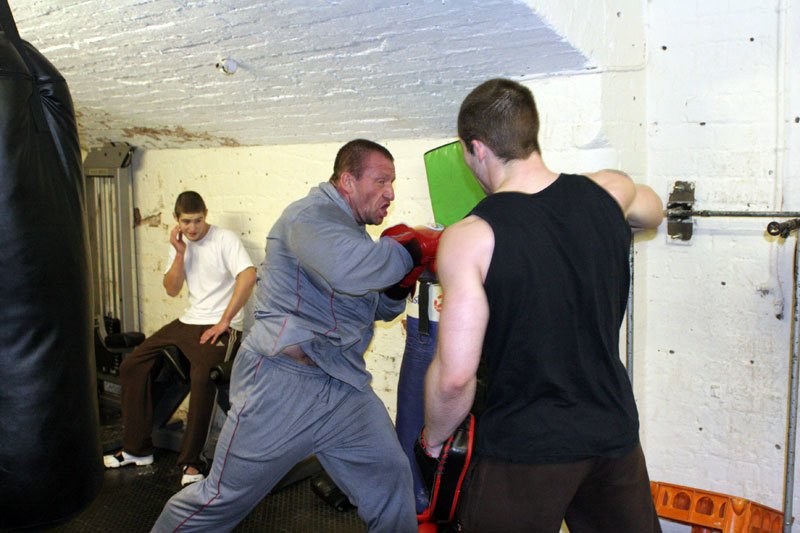 So what was your usual reaction when that would happen?

Usually someone would catch them before they did that and if not I'll just make my excuses that I'm training. I always hang out at the gym to chat after I finished training, just not when I was doing my business.

Do You Have A Great Gym?

If you know of another gym that stands out as supporting our sport and providing an atmosphere that encourages clients of all ability levels to reach their goals please send us an email at gymofthemonth@bodybuilding.com so that we can showcase the hard work our gym owners and managers do to provide us a great place to train.

Gym Of The Month Main Page