As a 16-year-old growing up in London, Simeon Panda was lean—like, really lean—and his 6-foot-1 frame only made it more obvious. Sure, he was athletic—he played rugby and ran track—but he knew that having a bigger muscular engine was the next step in improving both on and off the field.

So he took up weight training. At first, his approach was formless, and his results were inconsistent. He went through the same struggles everyone goes through. But the difference is that he rode out the storm, took meticulous notes, and ended up transforming that skinny teenage body into one of the most recognizable and aesthetic physiques in the fitness realm today.

Today, the 29-year-old Panda is a natural bodybuilding pro competitor and proud Myprotein athlete. Myprotein—now the biggest supplement brand in Europe and one of the fastest-growing supplement brands in the world—knows that each athlete's nutrition should be as unique as their training program, a message that Panda is excited to share with the rest of the world.

What transported the 215-pounder from scrawny to swole? It wasn't magic. It was these six principles, each of which you can put into use today.

Pick your plan and don't deviate

Experienced lifters talk about "beginner's gains" in reverent terms. However, more often than not, beginning lifters are simply too fickle and impatient to experience these gains. They'll start a workout program, but their initial gung-ho spirit fades faster than a Snapchat. Soon, they're either adding in heaps of new exercises to an already flawed routine, or they've checked out altogether, disappointed by a lack of instant results.

"Once you've started a specific training program, you need to stick with it for a significant amount of time to see its benefits," Panda instructs. "People tend to add things they've read about or otherwise change [programs] up, but at the start, you need to focus on the basics before adding anything more complicated."

The minimum time to give a program? Two to three months at least, which gives your body time to adapt. That may sound like an eternity, but those of us on the other side know you only get to experience it once, so it's crucial to milk it for all it's worth. The results you earn now—initially, you'll see strength increases, followed by muscular adaptations—will lay the foundation for everything that comes later. 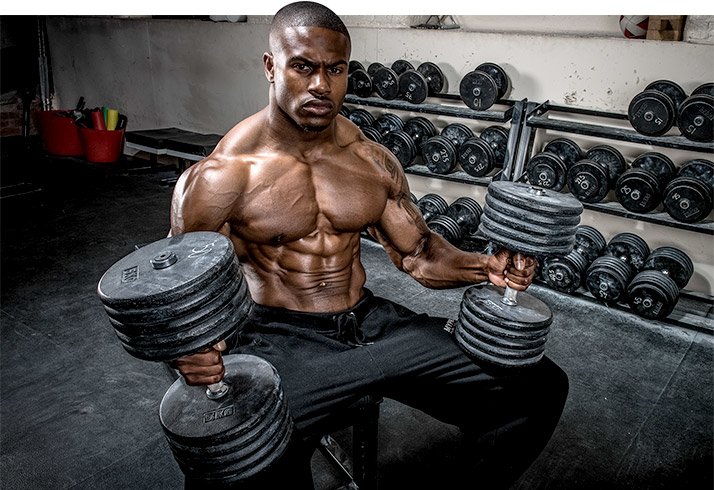 "Once you've started a specific training program, you need to stick with it for a significant amount of time to see its benefits."
2

When it comes to newbie training splits, the standard-issue advice is to either do all-in-one full-body workouts or some version of an upper body/lower body split, hitting all your muscle groups over the span of two workouts.

Like many enthusiastic young men, Panda initially worked every muscle every day. Once he got more systematic, everything came together. "I did single body parts and trained almost every day," says Panda. That means tackling each major body part on its own day during every seven-day stretch for up to an hour: back, chest, legs, shoulders and arms, with abs tacked on at least twice a week, doing multiple exercises for 3-5 sets apiece.

There is a caveat to this advice, however. "The decision depends on the time frame you have available," he says. "If you have the time to dedicate to five workouts per week, then this one-body-part-per-workout approach is good. But, if your schedule doesn't allow it, you may have to do an upper/lower split, and that's OK."

More crucial than the nature of your split, he insists, is that you find a dedicated time to fit it into your schedule. "I go at 5 in the evening every day," Panda says. "It's from my former 9-to-5 days. I always used to get out of work and go train, so I'm still in that habit now."

Determine what time works best in your own schedule and don't miss a session, whether it's the morning, the lunch hour, or a quiet gym at 2 a.m.

Use all the implements at your disposal

Some experts claim that it's best to lift only free weights as a muscle-building beginner, since they hit a target muscle and all the ancillary muscles that help balance your body from your core outward. On the other side, machine proponents contend that the safety offered by machines and the lower learning curve increases adherence and helps build the initial foundation of strength and muscularity.

Both sides have valid points. The real question is: Why are we taking sides at all? "Both machines and free weights have their place in a beginner's program," Panda explains. "You shouldn't be afraid of hard exercises, though. For example, I would say you should be doing squats and deadlifts right from the start, as long as you get the guidance needed to perform them correctly and avoid injury."

A combo of free weights and machines, which nearly all good hypertrophy-focused programs will advocate, helps you reap the best each exercise has to offer. For instance, you could get the advantages of free-weight dumbbell presses to lead off a chest workout, while also gaining the continuous tension offered by a pec-deck fly or cable cross-over later on in that same session.


Intensity techniques are worth the wait

These intensity-boosting techniques are proven to work, but Simeon Panda advises you wait until you're an intermediate lifter to use them.

Panda is a firm believer in intensity techniques like supersets and rest-pause training. But he also insists they're not necessary to stimulate muscle gains in your first 3-6 months of training. In fact, because they're so demanding from a recovery perspective, they might lead you to get worn down to the point where the quality of your training suffers, or you start skipping training altogether.

"You can spend a similar amount of time in the gym as a more advanced bodybuilder would—60 minutes, even 90 for legs—but you don't need advanced techniques like supersets, dropsets, partials and others," Panda says. "Add those in as you get to the intermediate level. It can be something as simple as adding a dropset at the end of every exercise, or supersetting two of your exercises on each body part. Just little tweaks."

Panda has similar advice about training to failure: "The same thing goes for taking sets to (momentary) muscle failure," he says. "You don't need that early on to make gains, although I do recommend pyramiding up the weight from set to set."

Eat as if your gains depend on it (because they do)

Those who don't make gains on a bodybuilding program tend to blame their training first. Then they'll fire up the search engine and start on a quest for the "perfect exercise" or "perfect routine," or just start adding intensity techniques out of fear that they're not going at it hard enough.

Unfortunately, the first two items on that list don't exist. With the third, you could be onto something, but more likely, you're falling short outside the gym, not in it. "You need to take diet as seriously as you do your workouts," Panda says. For faster, more measurable results, you should track your food and macronutrient intake, which will tell you if you're falling short on your nutritional needs. Yes, that means write it down! Keep a food log, or utilize a fitness app. Look for the Myprotein app, available later this year, to track your entire regime.

Protein in 6 oz. of fish

Only after you know what you're eating should you start making large-scale changes to your diet. And just like your training, your changes should be ones you can stick with for months on end—remember Panda's first principle?

Panda is a big believer in building a nutritional approach around some foolproof staple foods. For instance, he eats a lot of fish like salmon, tuna, and mackerel, all of which offer ample protein. Not that he's against chicken or steak. "Fish is just easier to prepare," he explains.

As for carbs, load up first with vegetables like broccoli, spinach, asparagus, sweet potatoes, carrots, and salads. Then, fill the rest of the hole in your stomach with whole grains. "Whole-grain rice is one of my main sources of carbs," Panda says.

Some people can be satisfied with simply training for health, appearance, and strength. For others, competition is the only motivation that will work. If that describes you, own it—and then do it right.

After six months to a year, you may be tempted to take the next step, with an eye on the competitive stage. Panda, who won the heavyweight tall class and overall at the 2013 Musclemania Europe—and earned pro status at his very first contest—recommends doing your homework before making the leap. Become a student of competition, and embrace the entire process as an educational experience from start to finish.

"Before your first competition, you should watch video religiously of some of your favorite bodybuilders posing," he says. "You may have a great physique, but if you don't know how to present it right, you won't do well in front of the judges."


Equally crucial, he says, is to seek out others who have competed before. "Ask people who know the ins and outs of the sport to check out your physique to critique your strengths and weaknesses and watch your posing routine," Panda says. "Find a team you can trust."

If you're competing simply to boost your ego, you'll quickly find yourself dejected by the harsh honesty the stage demands. But go in with the right mindset, and you'll find there's no such thing as losing. There's just learning—and that never has to end!