If you've read anything in the latest muscle rags about specialization for specific body parts you've most likely read that you must do more for that body part in order to get it to respond ...

If you've read anything in the latest muscle rags about specialization for specific body parts you've most likely read that you must do more for that body part in order to get it to respond. "Show no mercy" is a common phrase used when describing training for stubborn body parts.

However, I contend that this type of logic does nothing more than cause a great deal of extra frustration for the vast majority of trainees. It not only leads to further stagnation, but can lead to overall systematic overtraining which puts the trainee in even worse condition. The solution to such a problem is so simple that it often eludes even the most seasoned bodybuilders.

If any body part is not responding the first thing to do is look for what you can cut from your current program. Right off the bat you should suspect that the muscle group in question probably doesn't have the recovery ability of your other body parts and therefore doesn't sufficiently recuperate from one training session before another hit is taken. This is where the problem general begins to compound itself. The stubborn area stops progressing and the overtraining bug sets in, halting training progress in other areas. 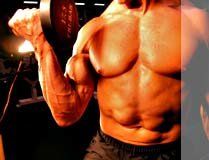 Begin by eliminating overlap, which involves the same musculature on separate days. If you do back and biceps in separate workouts, for example it's likely that biceps might get overtrained since they are taking two strenuous hits each training cycle. Regardless of how well you "isolate" your back during your training sessions there is no way to avoid using your biceps to a large extent in any form of chinning, pull-down or rowing movements.

With that in mind the obvious conclusion is to move biceps to back day and give them only one hit per cycle. The next step is to cut down your training volume regarding direct work for the troublesome body part and rely more on secondary stimulation. In the case of biceps, for example, you should probably eliminate all but one direct biceps exercise. This is common sense training alterations that you can make use of even before any training problems occur. If, on the other hand you have a truly stubborn muscle group even after you've applied the above ideas you need to move into a truly specialized routine. Such a routine will involve more volume, a more direct movements for the body part in question but it must be done rationally so as not to incur a demand over and above the recover abilities of the system.

This is where training truly gets interesting. You now have to decide for certain if you are ready to specialize as it will involve halting progress in all other areas of the body until you are satisfied with the size/strength of the lagging body part. That's actually the cornerstone of specialization routines. You must allow all other body parts to merely coast while you strive to make use of the excess recovery ability solely for the production of extra gains in the one body part you are working on.

If you are on a 3-day-per-week routine you will need to strip down your training such that in two of the days you can work the entire body split over those two days while the third day (actually the first day for that particular week's training) will be dedicated entirely to training the lagging body part.

It is imperative that while training the rest of your body at this time you not attempt to increase the poundages used or the volume of your training. It would be best if, at this time, you drop back to 90% of your personal best poundages in the preferred rep range for all movements which are not intended for the specialization body part. This will prevent atrophy of the musculature of the rest of the body while growth and recovery of the specialization area is allowed to soar at an all-time high. On a normal abbreviated routine the musculature of the entire body is worked approximately equally over two workouts per week. This usually allows enough recovery for some great progress on all body parts at the same time. A good routine might look something like this:

In the case of specialization routines the idea is to merely maintain the strength and size of all muscle groups other than those involved in the specialized body part or exercise. For the purpose of this article I'm going to assume you still want to gain some overall body size but that your gains have stagnated and you are having trouble getting the body to respond.

This would be the case for any hardgainer who has been pushing at abbreviated training styles for 2-3 years and is still trying to gain some mass. In such a case I would recommend a specialization routine centered around a particular exercise which emphasises the largest amount of muscle over the entire body.

The best possible exercise that I can think of would be the deadlift. The deadlift is possibly THE best exercise known for creating an anabolic environment in the body. In fact 4-6 weeks of specialization on the deadlift could well get your gains going in the rest of your lifts as well. So, with all of the above in mind, let's take a look at a specialization routine centered around the deadlift.

There you have it. Remember the idea is NOT to progress in the Thursday workouts and to allow all of your recovery ability to be laid into the deadlift sessions. In the 4-6 weeks that a trainee could use such a program there should be vast improvements in the specialized bodypart which should in turn spill over into the other lifts at the end of the specialization period.

Obviously there are many other areas that could be specialized and the routine would have to be reconstructed to suit each individual need. However by using the advice given and the layout from the sample routine you should be able to develop your own specialization routines with a little thought. Go for it. Try something radical and you never know what you'll learn in the process.