The ultimate football (soccer) training guide, Renegade Style! This training regime can easily be implemented by a skill-specific coach... Improve your game today and hold your own with the world! Get it all right here!

I should first cut to the chase and state emphatically that I take levels of fitness very serious. Let me repeat this point as it is completely unacceptable for a player not to possess a high baseline of fitness.

While this can be an issue in some sports, inefficient fitness levels in soccer will destroy the ability to grow and develop and cannot be tolerated. Given that it is not out of the ordinary to run 10,000 plus meters in a match, a lean well conditioned athlete is an obvious requirement. 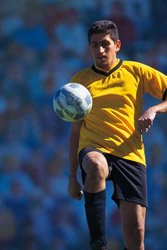 Click Image To Enlarge.
A Lean, Well Conditioned Athlete
Is An Obvious Requirement.

As it relates to work threshold and general fitness, quite obviously the most direct way to evaluate is aerobic capacity, which is the maximum capacity to transport and utilize oxygen during increased exercise measured in milliliters per kilogram of body weight per minute (ml/kg/min).

There are significant weaknesses in considering VO2 max as the holy grail of aerobic tests, however it can be an important general guide for player analysis and likely the most efficient manner in a broad testing circumstances.

As a general guideline within teenaged adult males, VO2 max needs to be a minimum of 53 (53.20 using a 2 mile run in 12 minutes) with upwards to 65 (64.97 using a 3 mile run in 15.33 in minutes) in optimal adult males playing at elite (professional) club or international levels. If those numbers appear too high for you, let me state these numbers are not subject to compromise.

Unfortunately the general level of athleticism and work threshold in sport (and society) today is at deplorable levels and general fitness.

In many nations, the number I suggest will be astonishingly high given the lack of demanding physical education programs in school systems or cultural sporting activities, however it is absolute necessity that this area is attacked voraciously. To do so we must look not only at our specific linear speed and agility work that will deal with this issue but additionally General Physical Preparation ("GPP").

The phrase GPP (General Physical Preparation) has become a popular "buzz-word" in the fitness world by virtually every self-proclaimed "expert". 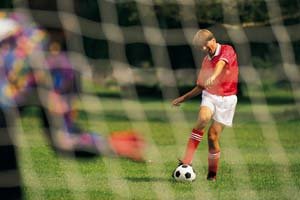 Click To Enlarge.
The Level Of Athleticism Should
Be Attacked Voraciously.

When I began to discuss this area nearly twenty-five years ago it was unheard of and for roughly twenty of those years it was scoffed at. And while it has become accepted, it is generally only used as a marketing phrase and rarely understand how to implement a proper and effective general physical preparation plan into your program.

With a proper work threshold development program recovery from strenuous activity will be improved, motor skills enhanced, the athlete will be able to adjust to situations under duress and learn that adversity is something you overcome, the core/trunk region will be stabilized along with a strong posterior chain and movement will be dominated by a powerful lower body.

Weighted and non-weighted programs will be designed such that overall time of training per section is equal but that can be adjusted to suit an athlete's goal and needs.

It is crucial that you remember not to simply use mediums that you enjoy and remember this is "generalized" training. Weak spots should be eliminated, making them into strong suits as you learn to make the difficult, easy. There is a virtually endless array of movements and each depends greatly upon the athlete's stage of development and should not be impeded by expensive or numerous pieces of exercise equipment. 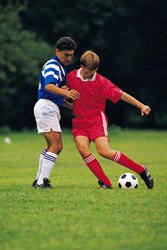 Click Image To Enlarge.
Remember That This Is "Generalized" Training.

However with this said, I have a massive departure with soccer and other sports because of the unique sporting requirements and the tremendous athletic needs.

Once again this will likely not be a popular statement but the level of fitness and overall athleticism is much higher in soccer as opposed to many other sports (i.e. football) that typical GPP regimes are "child's play" to dedicated players.

Given this for well conditioned players, they will get far greater benefit from taking part in Futsol, Brazilian Volleyball, European Handball or if you wish to stay off your feet, Swimming or Water Polo. By doing so, not only will the athletes enhance levels of fitness but also enhance motor and possibly technical sport skills.

Finally and while I am aware this is a contradiction to the idea of "generalized" work, I cannot argue with an athlete engaging in Futsol even though it is obviously based upon similar sporting skills as their non-weighted GPP. In fact in optimal situations every player will engage in Futsol as it will enhance tactical abilities and general ball skills.

Within the weighted section of GPP, while there are many mediums that athletes have used in the past, this past year I released the final training system of my career which I feel is far superior to any of these.

The DMCTM system has been widely accepted by select coaches, athletes and trainers as one of the most important of my training innovations. With the exception of my most recent books it hasn't been seen by the public unless you have access to a select group of professional DMCTM instructors who teach the system in England, France and the United States.

The DMCTM system is a unique dynamic nine-stage program based upon the fluidity and rhythm of dance within a format that stresses right-brained thought.

In the earliest stages the program uses static holds that emphasize the origin of total movement, complete stillness and teaches a deep level of concentration of movement and body harmony. Advancement through the stages comes with an intense understanding of the body, the relationship of grace and fluidity in dance and evolves into faster tempo (music) and syncopation akin to Salsa.

Prior to entering the DMCTM system, each of our users will employ the following recommended preliminary program. Users should make sure they are wearing comfortable clothing and in a relaxed, peaceful setting in which they can devote complete attention to. These holds appear quite easy at first but when performed correctly will greatly enhance posture and neuromuscular control (obviously the focal points of the program).

Each circuit starts with 30 second holds of the following positions:

Each circuit concludes with 30 second holds of the following positions:

The exercises of each of the circuits noted below should be performed with 30-60 second holds of each position. Pay careful attention to form with heavy emphasis on pushing the hips high and driving the heels of the feet into the ground, while deeply concentrating on complete stillness.

If the durations of the holds are too long, scale back (i.e. 15 seconds) and use the stretch found after the "bridge" to alleviate tension in the back.

This preliminary work of the DMCTM system should be performed two to three times per week. Future information on the DMCTM system will be released shortly including regional wellness classes and centers.

Returning to the non-weighted section of GPP, for athletes in need of additional fitness work, basic calisthenics can be employed. This typically involves "simple" bodyweight calisthenics further broken down into active recovery (i.e. jumping jacks and shuffle splits) along with semi-explosive work (i.e. burpees, squat thrusts and "chinees").

Each section of "active recovery" and "semi-explosive" work consists of two consecutive sections of thirty seconds each and thus an entire "circuit" equals two minutes of consistent movement. 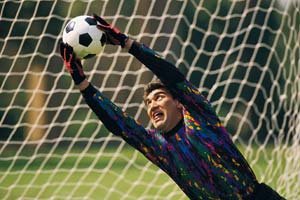 Click To Enlarge.
For Athletes In Need To Additional Fitness Work,
Basic Calisthenics Can Be Employed.

Total foot contacts will vary between eighty and ninety per two-minute circuit with recovery-based contacts representing 60-75% of that total.

Using the most common movement choices (jumping jacks, shuffle splits, burpees and chinees) a set will equal two minutes with athletes generally starting at the six minute mark and working comfortably to thirty minutes and over.

Recovery work must always be done in equal proportion to semi-explosive work from a timed capacity while always ensuring top quality form in all the movements. Within Football this should only be used when athletes fall deficient of fitness needs and do not make use of sporting suggestions noted earlier.

It cannot be stressed enough that good postural alignment must be maintained. Poor posture such as allowing the hip to drift into internal rotation places the limb at significant risk.

When an athlete learns a motor pattern they will typically tend to repeat this motor pattern. By not re-enforcing the proper position during training, the athlete is allowed to learn this poor postural position during the performance of maneuvers involving the limb resulting in a higher risk of injury.

A second point that needs to be understood at this time is the concept of postural activation. Simply stated the core of our bodies set up the limbs for movement. If the limb is already in poor position, it must either return to a more normal position before movement is initiated, or it moves in a dyskinetic, less efficient pattern to perform the task. The net result is a delay in reactive time for the athlete and thus results in a slower athlete.