Olympia was a city in ancient Greece, which hosted the Olympics from 776 B.C.-393 A.D. Greek Michael Kefalianos quests for Mr. Olympia 2011, to honor the bodybuilding gods.

Greek bodybuilding star Michael Kefalianos has been a pro bodybuilding competitor for only three years, but he is already one of the most popular athletes in the game. He seldom places outside the top six in any contest he enters. The Greek is comparatively inexperienced at the pro level (11 contests, nine top-six placements), but it certainly does not show.

Michael enjoys blessed muscle density and conditioning that bodybuilders either have or don't. He flexes freaky proportionate muscle mass that cannot be overlooked. Michael promises in 2011, his second Olympia appearance, to bring his career-best package.

Kefalianos sports arguably the best legs in bodybuilding today, and certainly some of the best overall shape to be seen on any pro stage. Michael, hailing from Kos, Greece, impresses judges with his ability to dial his physique to perfection each time he enters the pro fray. He caps such desirable physical attributes off with presentation skills among the best the sport has seen. The multiple Mr. Greece bodybuilding champion and 2009 Arnold Classic heavyweight third place finisher is, in the minds of many, a dark horse going into this year's Olympia.

The fan favorite qualified for the Mr. Olympia on his first attempt in 2009, following a first-place finish at the Australian Pro Grand Prix. Michael loves nothing more than to keep bodybuilding audiences happy with constant improvements. He promises at this year's Olympia to be even more shredded compared to his last show, the New York Pro. He'll exhibit further improvements in dense muscularity. There is little doubt he will be among the best prepared competitors on stage. 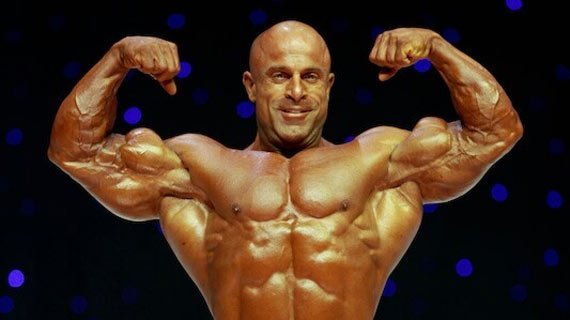 Kefalianos expects to weigh 250 pounds on this year's Olympia stage at 5-foot-7. That's up from 240 pounds at his last outing. Just how will he plan to carry this additional size without obscuring his renowned shape? Pro bodybuilding success depends upon showing both a fullness of muscularity, and an aesthetic shape that accentuates such mass.

So far Michael has been able to display this combination. His added mass appears to give him the freak factor needed to place high in the biggest event of them all. Stay tuned for the new and improved Michael Kefalianos as he aims to secure his best pro placement yet.

In the following interview, Michael provides his blueprint for pro bodybuilding success and relates what he has in store for his year's Mr. Olympia field.

Q: Congratulations on your recent pro success. What improvements have you made to your physique since 2010?

Michael Kefalianos: First of all, let me thank you for the opportunity to do this interview. In 2010 I competed in six shows, from Australia to Spain, trying to get an Olympia qualification.

I did not have a lot of time to make any major improvements, so I tried instead to work on keeping my conditioning and improve my posing. After the Europe Pro show in Spain in 2010, I took some time off and competed again in March 2011.

This allowed me to take a little time off before beginning my new plan, which is focused upon improving my overall mass. So, from 2010 to 2011 I added quality mass to my frame, about 4-5 kilos I would say, while maintaining my signature conditioning. I made improvements to my delts, upper chest and arms which helped my symmetry a lot. And I think this shows in my photos as well.

I went from about 240 to 250 pounds in six months. I believe this is what allowed me to move up and earn my Olympia qualification in Tony Doherty's Australian Pro this past March.

Q: What is it about your look that made you one of the more popular pros currently competing?

Definitely the shredded conditioning that I am known for, keeping it all year long for the shows I do. They call me the king of conditioning for good reason.

Q: What kind of physique are you hoping to present onstage at the 2011 Mr. Olympia?

I plan on bringing more quality muscle mass and more muscle density, while improving some body parts and getting even more shredded and conditioned on the day of the show.

Q: How does it feel to have qualified for the 2011 Mr. Olympia? Do you expect you will be even better on the Olympia stage compared to how you looked at the 2011 Australian Pro Grand Prix?

Let me say that just being on the Olympia stage is, again, a dream come true. To compete at the highest level of your sport means that you have to bring 100% of what you are capable of, to honor and show respect to those who are there to see you compete.

I will be better than ever for this year's Olympia, shredded and superbly conditioned at about 250 pounds.

Q: As you mentioned, your shredded conditioning is a signature aspect of your physique. And you are clearly one of the best-conditioned competitors on today's pro stage. What do you do to achieve such great shape and how do you maintain it from show to show?

Thank you! The one thing I believe in is high quality clean food all year long. Also [my conditioning improvements result from] quality training and always trying to improve, all year long, not just 12 weeks before a show.

In the off season I do cardio three times a week. About four weeks before a show I will increase my cardio to 45-50 minutes, seven days a week.

Q: What do you like most about pro bodybuilding competition? What keeps you motivated to compete year after year?

I love competing and continuing to make improvements from one show to the other. I want to give the fans what they want.

Q: How would you describe your approach to training?

My training is not too heavy and not too light. Something in between: 10-12 high quality reps per set without cheating, while maintaining perfect form.

Q: Have you made any changes to your training over the past year? If so, what have these been and how have they helped you to improve your physique?

I have changed the exercises I do for back training somewhat. I have gone back to more basic movements. Also for delts I have increased the intensity by doing exercises for these muscles from different angles.

Q: Could you describe your current nutritional approach?

I consume a lot of quality fish and chicken, some red meat, potatoes, rice and salads (pre-contest).

Usually pre-contest it is fish with potatoes or chicken with potatoes. In the off season I have a big protein shake right after my workout.

They are there to supplement a good nutrition plan. I use them mostly for energy pre-workout, for joint support and for additional protein post workout.

I have always taken the highest quality supplements, which in my opinion are by MHP.

I use Probolic-SR as my main protein, switching to Isofast-50 whey isolate as I get closer to a show. I take a daily multivitamin called Activite Sport, also by MHP, NO-Bomb for my preworkout boost, Glutamine-SR and, finally, for my amino acids I take BCAA-3300 which delivers a 4:1:1 BCAA ratio - it is the best on the market.

Q: This year's Mr. Olympia show will host the usual top-line competitors, you included. Who do you see as being major competition for you and why?

I think on any given day I can place in the top six in any show. My conditioning and quality are among the best in the sport and with the added mass I will bring September 16, I will do very well.

After the Mr. Olympia I will compete in the Sheru Classic in India and after that at the Arnold Classic Europe in Spain. For 2012 I plan on competing in Tony Doherty's Australian Pro and The Arnold Classic in Ohio. After that I will see which shows I will do, but there will probably be one more show in Europe and one or two more in the U.S.

Q: What message would you like to give to your fans who will be coming to watch you compete at this year's Olympia?

I want to tell them to enjoy the show and to support the athletes as much as they can. It will be an amazing show, better than ever and I personally want to show them my best.

I would also like to take this opportunity to thank bodybuilding.com for this interview and their interest in me. I also want to thank my sponsors, MHP supplements, for their help throughout the past year we have been together, my Greek sponsor

See you in Las Vegas!