My Experience On The ABC Television Show, 'Wife Swap.'

Miss Natural Northern Figure 2006, Melissa Johnson, shares her experiences on being picked to live a sedentary lifestyle for a week on the ABC television program, 'Wife Swap.' Hear about her frustrations and trials. Could you handle it?

I honestly didn't believe them when I first received their letters. I thought it was just another junk e-mail that I'm sure you all are familiar with. It wasn't until the ABC "Wife Swap" cameras actually showed up on my doorstep that I started believing!

It all happened so quickly that we barely had time to question any of it. We were asked to appear on the show Wife Swap Episode 310, Air Date 1/15/2007) after I won the 2006 NPC Natural Northern Overall Figure Championships. That was early October. By the end of that month, we had met the directors and several other folks we would be working with. We started filming the show mid-November.

It's a very strange experience having directors and camera people and the crew going through all of your things and changing your house around while you just try to stay out of the way. I couldn't believe everything they had to do to prepare our house for national television. We didn't mind though - it was actually a lot of fun!

Once our house was all prepared for filming, we started doing all the shots that were needed before I left for Michigan. Our days and nights were jam packed!! Who knew that it would be so much work just for a one-hour reality show!! After a couple hours of filming here at my house I was off to Michigan to meet my new family.

When I first arrived at the house, I noticed that everything was extremely small. The house was small, the counters were low, etc. But I still really didn't get it until I read their manual. Once I read the manual and realized the type of people they swapped me with, I was kinda puzzled. I was ready for about anything, but not little people. They really caught me off guard. I really had to put my thinking cap on and start thinking of different things this family could do to get into shape.

I soon learned that dad, Bernie, ate fast food every single day - which I had to change! If nothing else, I had to get him to quit doing this. I also learned that the two kids, Ben (14) and Allie (12), were very inactive (sedentary). That is pretty much the story we are all hearing around the country. Our youth have become a very lazy generation. I then made it my mission to teach this family how to eat healthy and how to mix fun with working out! 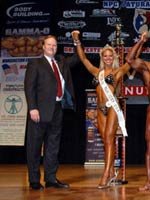 I had to live their way for the first week - which was making me absolutely crazy!! I pretty much sat around most of the time and did nothing. Being the busy body I am, it just wasn't happening. I actually begged the crew to let me do something, clean house, anything! Of course I couldn't. I had to stick to the program.

I had to eat a bunch of crap all day for a week. Needless to say I felt horrible by the end of the week. It's amazing what one week of junk food and no working out can do to a person. I was very unhappy. I even broke down and cried by the third day of the swap. I couldn't wait until rule change...

A Turn For The Better!

The day had finally come, my turn!! I was determined to change this family's life... forever! I didn't want to force my ways upon them, but I wanted them to understand what it was they were doing to their bodies. There were so many things that the viewers did not get to see, which is a real shame.

I taught the family how to cook several healthy meals and we also went to the gym everyday. They loved it! I had a big bowl of protein bars on the counter that I noticed started disappearing very quickly! They were also starting to make some of the healthy recipes on their own because they really liked them!! I was so happy!!

After I returned home to my family (who I missed terribly!), I had heard from ABC that the family had continued with their new eating habits. They also told me that the family had organized a kickball team that would start playing against other teams this spring. They said I had truly made a difference.

I just want to add a special "Thank you!" to my inspirational trainer, Dave Liberman. You brought me back to life!

I am Melissa Johnson, NPC Figure Competitor and star of the television program, 'Wife Swap.' I won the 2006 Natural Northern Figure Overall!