Training with weights offers many benefits. First of all, because of its short and long term effects on metabolism and fat burning, it can both help you lose weight and body fat and keep it off. Since you lose less protein and more fat, you'll retain the body tone that others lose when they go on a diet.

Numerous studies have shown that weight training can enhance physical and mental health, [1] decrease musculoskeletal disorders and some of the problems associated with ageing, such as osteoarthritis, osteoporosis and muscle wasting, and improves mobility and function. [2,3]

Weight training results in increased hemoglobin levels - 25% in both men and women, and increased stroke volume - more blood circulating at any one time. As such, it increases exercise tolerance and decreases fatigue.

Resistance exercise counteracts some of the effects of aging on cardio-pulmonary function, and results in an increase in maximum oxygen consumption and the capacity for normal movement. [4]

Unfortunately, while it's clear that using weights offers many benefits, many women shy away from it because they're afraid of getting too muscular and manly. So they keep away from using weights, sticking to aerobics, yoga and pilates, and ultimately cheat themselves from getting the body they really want.

That's because lifting weights, and even better, lifting relatively heavy weights, is the best way for a woman to reshape her body and look trim and fit. In fact lifting weights does it all, and can take the place of yoga, pilates, and aerobics. Indeed, no other form of exercise offers so much.

While women who lift weights will gain some extra muscle, muscle that will only accentuate their feminine looks, they won't gain muscles like a man. That's the stance that the new position paper on weight lifting for the American College of Sports Medicine has taken. Basically the paper extols the virtues of weight lifting for women, saying that it provides not only with an enhanced feminine look, but also better health.

In general, unless the woman is pharmaceutically enhanced, such as with the use of anabolic steroids, getting too muscular for women is a myth. Women won't become manly if they train with weights. That's because they don't have the hormonal and genetic apparatus to put on the amounts of muscle that men can.

While the muscle fiber type distribution is the same in both men and women, the type I fibers cross section is larger while the cross sectional area of type IIA and IIB fibers (the fibers that hypertrophy the most and are responsible for much of the increased muscle mass in bodybuilders and power athletes, are smaller in females. [5] And while specific training decreases these differences between women who train and men who do not, the same training in both men and women does not give rise to the same increases in muscle mass.

Men are invariably able to add much more muscle mass than women.

Hormonal Differences and Effects on Muscles and Exercise

The much higher levels of the anabolic androgenic hormone testosterone in men leads to differences in muscle and fat mass, and differences in response to exercise, including substrate utilization, effect on lipolysis and protein synthesis.

This is an important point for women to understand. No matter how much they exercise there is no danger of the normal female becoming too muscular.

The problem is that women see the muscular female bodybuilders and other athletes and think this will happen to them if they train with weights. What they fail to realize is that most of the massive looking female bodybuilders use anabolic drugs, such as anabolic steroids, to increase muscle mass and strength beyond what would normally be possible.

But you don't have to be afraid of muscle. It's good for you and, with a proper weight program; you can get exactly the kind of body you want. 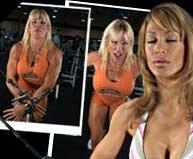 In my experience over the past four decades, I've found that women who use weights, even those into high intensity bodybuilding or powerlifting, don't develop a masculine physique, unless they're using drugs such as anabolic steroids.

That's because women don't have the necessary makeup and hormones to develop large muscles.

Weight Training Is A Positive Experience

On the other hand several studies have shown that women who try strength training out usually have positive experiences. For example, a recent study involving women who were enrolled in a strength training class, evaluated their weight, percentage of body fat, body circumference, and strength measures before and after the course.[6]

Forty-nine subjects participated in strength training, twice a week for a total of 12 weeks. At the end of the class, participants were asked to respond to 9 open-ended questions dealing with perceptions of body image. Besides the expected gains in strength, the women showed a mean weight gain of one pound and a 1% reduction in body fat.

The bottom line is that training with weights accentuates femininity, increases health and strength, and is the best exercise to help you lose body fat and maintain a fit and trim body.