Want to build a chest to challenge some of the best? Take a few pointers from Jay Cutler's old-school, tried-and-true training style discussed in this exclusive interview!

There's nothing fancy about four-time Mr. Olympia Jay Cutler's chest workout, yet few men were ever able to keep up with him. Here's how he built his Sandow-winning chest with heavy weights, high volume, short rest intervals—and not a single set taken to muscle failure!

Live and Get Large with Jay Cutler!
Follow this docuseries and muscle-building plan from 4-time Mr. Olympia Jay Cutler, along with over 40 other fitness plans, for only $8.99/month!
Q

JAY, HOW WOULD YOU SUMMARIZE YOUR APPROACH TO CHEST TRAINING?

Well, I'd hardly say it's unique given that I've done the same thing for 20 years. Honestly, I don't do anything different. I stick with straight sets, nothing fancy. I don't do any kind of advanced-training techniques like dropsets.

MOST BODYBUILDERS EMPLOY ALL SORTS OF INTENSITY BOOSTERS. HOW IS IT THAT YOU'VE MANAGED TO DO SO WELL BY DOING ONLY STRAIGHT SETS?

Because it's always worked for me. I don't understand why I would want to change something that's working. I never incurred any significant injuries and I was continually making gains over the years, so I didn't see the need to change things up.

THE FIRST EXERCISE IN YOUR ROUTINE IS OFTEN CONSIDERED THE MOST IMPORTANT BECAUSE YOU CAN ATTACK THE WEIGHTS BEFORE FATIGUE SETS IN. HOW DO YOU CHOOSE WHAT YOU DO FIRST?

The first exercise in my routine is almost certainly a compound [multi-joint] exercise. With this kind of movement, you can push the most weight because more muscle groups are involved in the lift.


For those reasons, I always started my chest workout with a dumbbell or barbell movement. You get better range of motion with free weights, but later in my career I focused more on machines because of the degree of safety they afford.

I'm a big user of the Hammer Strength decline machine, but those didn't even exist, at least in my gym, when I first started training in 1991.

DO YOU START WITH A PARTICULAR BENCH ON CHEST DAY?

I never really had any weak [chest] areas that I needed to significantly bring up, so I varied things up but not a whole lot. For one, it depended on the gym I was in; I traveled a lot and was always training in a new facility. Occasionally that allowed me to try out new equipment, but sometimes I was limited, as well. For one, not every gym has dumbbells that go up to 200 pounds.

Rather than making arbitrary changes in my workout, if I had a good workout, I'd continue doing it. Usually after a while you see diminishing returns, but I never made changes for the sake of making changes. If I liked a workout, I stuck with it.

I never believed in the theory that you had to change things up week to week to elicit changes. I believe that if you train to your fullest potential, if you exert the most you possibly can, you're gonna grow as long as your diet and sleep patterns are in sync with your training.

YOU RELIED MORE ON MACHINES IN YOUR LATER COMPETITIVE YEARS?

I went to machines later on because I feared injury. As I got more and more successful, it seemed like other bodybuilders were increasingly suffering from bad injuries, and frankly it was about the only thing that didn't happen in my career. 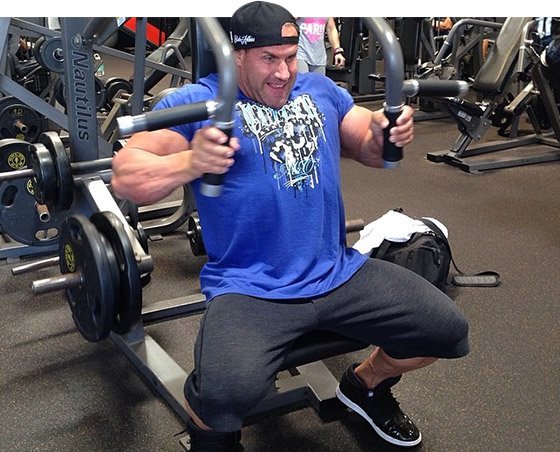 As I got older, I became afraid of throwing around the crazy weights because I was so strong. I could use 200-pound dumbbells and I could do 500-pound bench presses for reps. It seemed like everyone else who used those kind of weights sooner or later ended up with an injury.

So I switched things around a little bit to try to exhaust my muscles a little more rather than just trying to keep going heavier.

HOW IMPORTANT ARE WARM-UPS BEFORE HITTING THOSE KINDS OF WEIGHTS?

Being in Vegas, you get warm just by getting to the gym, so I really don't need a warm-up per se. But I still do several lightweight sets, what I call "feel" sets. It helps get my mind into the movement, develop a feel for the motion, getting under the weight.

Then I start pyramiding up, doing at least 3-4 working sets. So, on my first exercise I'm doing 6-7 sets total.

DO YOU TAKE ANY OF THOSE SETS TO FAILURE? 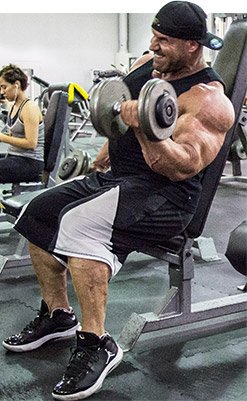 "In my 20 years of training, I've never trained to failure on any set. Ever."

In my 20 years of training, I've never trained to failure on any set. Ever. I always trained with a weight in which I could do 8-12 repetitions.

For sure I could use more weight, but my focus wasn't on building even more strength or training to failure—rather it was on volume.

You can't do both high volume and high intensity; you have to pick one or the other. I'm a 20-set guy, I'd do 20 sets no matter whether the body part was chest or biceps. It didn't matter. For back it was up to 30 sets. Your nervous system can take only so much abuse.

For me, for anyone, doing high volume and training to failure—even past failure—is just too much. I never felt it was even necessary to try a technique like forced reps.

I learned the concepts of lifting mainly through my trainer Chris Aceto, and it became fundamental that we'd never do a set for fewer than 8 reps.

SO YOU DON'T GO ANY LOWER THAN EIGHT REPS WHEN TRAINING?

With deadlifts I'd go as low as 6, but for everything else it was 8-12. Obviously I could do more weight, but I never felt I had to prove anything, so I never did.

SO CAN YOU TELL US WHAT YOUR MAX BENCH PRESS IS?

I have no idea.

IS THERE ANYTHING UNIQUE ABOUT YOUR TRAINING STYLE THAT WOULD CAUSE SOMEONE TO SAY, "THAT'S HOW JAY CUTLER TRAINS?"

A lot of guys who watched my training videos thought they could keep up with me because I don't train past failure. They come here and train with me but they end up gassing out. They can't keep up the pace.

That's because my rest time is just 45-60 seconds max between sets. Most of the time I'd rest only as long as my workout partner, which was usually no more than about 45 seconds.

"A lot of the guys back in the day, from Arnold to Gaspari, trained this way with very little rest between sets, and I really think that's what bodybuilding is about."

A lot of the guys back in the day, from Arnold to Gaspari, trained this way with very little rest between sets, and I really think that's what bodybuilding is about. It's about volume training, going in there and getting the muscle full, and damaging the tissue and then getting out of the gym so the process of repair can take place.

ARE GUYS OVERLY CONCERNED WITH HOW MUCH WEIGHT THEY CAN LIFT?

If they're bodybuilders, they shouldn't be. Some guys can bench press tons of weight; other guys can't. Everyone's got particular lifts they're fairly strong on. I was one of those guys who could never curl a lot of weight but I had almost 23-inch arms.

Just about every guy in there could curl more weight than me. Again, weight wasn't the variable I was most concerned about.

MANY LIFTERS MEASURE PROGRESS IN TERMS OF WEIGHT LIFTED OR TOTAL REPS, BUT PROGRESSIVE OVERLOAD IS ALSO ACHIEVED BY REDUCING REST INTERVALS. THAT'S WHAT YOU PREFERRED?

You're right. People want to judge progress only by how much they can lift. That's absolutely backward from what bodybuilding really is. I don't believe that strength has anything to do with what we do [as bodybuilders]. Again, rest intervals are one of the many variables in bodybuilding—it's not only about the weight!

SINCE YOU DIDN'T GO BY WEIGHT, HOW DID YOU JUDGE THE EFFECTIVENESS OF A WORKOUT?

You know, I judged them by how sore I was afterward. At my peak and in my earlier years, I'd get incredibly sore. I mean I'd be sore for days and days and days. 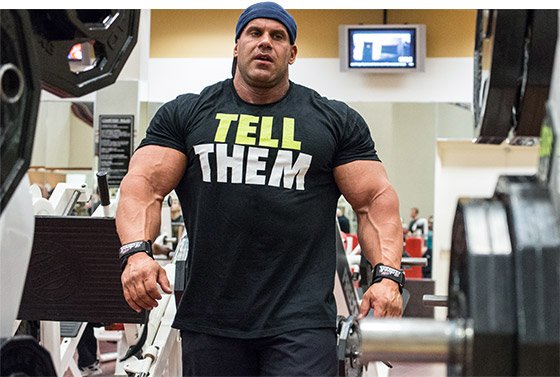 "There's a number of factors involved in setting up your training split. For me it included travel, eating patterns, sleep, and recovery."

Really, there's a number of factors involved in setting up your training split. For me it included travel, eating patterns, sleep, and recovery.

WE HAVEN'T TOUCHED ON IT, BUT HOW IMPORTANT WERE SINGLE-JOINT EXERCISES ON CHEST DAY?

We haven't touched on it because I was never really a believer that there was much benefit in fly movements. With chest training, there are only so many things you can do, so it was lots of types of presses to get the contractions to build a full chest. It's less about lifting the weight than feeling the contraction.

This is your chance to lift, eat, and live like a legend. It's a master class in building badass mass. Step into the life of
Jay Cutler and build your best body.

Jay Cutler: How I Survived My Toughest-Ever Workout

When you're on top, everyone is gunning for you. How did Jay Cutler dominate competitive bodybuilding for five years? He trained harder than his rivals and won four Mr. Olympia titles.