Gerardo had no choice but to shape up or miss out on joining the USAF. Read on to see what he had to change in order to make his career dreams come true!

I started on January 28th weighing 270 pounds. I gained weight for football (250-260) but after the season I gained more weight and found it was getting out of control. I was eating anything I wanted. I would eat two dinners, one at my girlfriend's house and one at my own. It was really getting out hand.

I had always considered joining the military but always saw myself being a college football player at the same time. A lot of college visits came around and I managed to get some small offers from division 2 schools. Being a short D2 lineman meant not being a standout prospect, so in turn that meant not a lot of money toward my education. That really got me thinking about the Air Force and the educational and other benefits of being an airman in the world's greatest air force.

I made a few calls to recruiters and filled out forms to get more information, but communication ended when I told them my weight, over 80 pounds from where they would need me to be to enlist, and 60 pounds over the limit to even consider working with me. The news hit me like ice and I was bummed at the time but also inspired and motivated to lose the weight. I took pictures to see where I was at as well as measurements of my waist and neck in case they could do a body fat measurement.

When I looked at the pictures I had taken I felt pretty sick at what I saw. I felt disgusted, but at the same time I used that to fuel my mind for the next months of being a fat burning machine. I knew that even if I didn't join the Air Force, I would never want to look like that. I knew I would never be comfortable in my skin.

So from 270 pounds, the fat loss journey to 210 pounds began (I originally planned on doing a body fat measurement at 210). 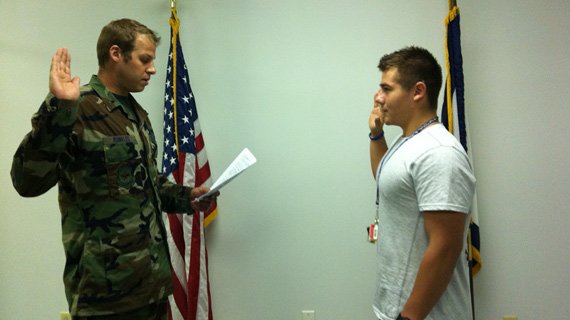 I knew that even if I didn't join the Air Force, I would never want to look like that.

I had always been a familiar face in the gym. I had really good strength base to work with starting out. I remember at my peak I was able to rep 225 for 18 reps. I never really cared much for my diet though. Actually, I paid no attention to my diet. Before, I would maybe diet for a week and it would end as fast as it started. I told myself that this time, that would not be the case. I remember getting on the site and forum and researching and asking as many questions as I could.

I thought I gained as much knowledge as possible and went into the gym and worked out as hard as ever, getting on the treadmill in sweats, jogging for at least 3 miles a few days per week, or waking up early before school and going for a 30 minute jog. My diet was looking great. I had completely eliminated fried foods, and cut all snacks. I no longer drank any soda at any point, I no long ate a candy bar when I got a sweet tooth, and I no longer snacked on the fried chips before eating Mexican. I was a new man.

I never at any point really counted macros, which surprises many. I could never count calories because of eating with my family a lot and such. I would just make sure it was healthy. I had to understand what was bad and what to cut from any meal or dish. Starting to realize how bad soda and stuff like mayonnaise is makes it much easier to completely get rid of it. I kept my carbs to a minimum, and still do, and kept consuming protein all day long.

It was a long hard process not being able to eat the foods that I once ALWAYS ate. Cutting pizza and hot wings, cheesecake and cookies, spaghetti and garlic bread came a long way. If I ever ate anything that I was iffy about since I didn't count calories I would think, "well, this is definitely better than eating a medium pizza." It takes a lot of will power to say no to the bite size Snickers bar in the jar at the bank window, but when you walk away from it you feel good.

Sometimes you will say, "well this can't hurt," but trust me, I didn't count many calories but I do know they can add up quick. I get a lot of questions from people saying "how did you do it?" or "eight months?!" and I always go back to saying diet is everything. Diet truly is everything.

I was always lifting weights before I wanted to lose weight but I never ate right. Eating right, lifting heavy, and doing some cardio will go a long way! Throughout losing weight, I experimented on trying to find a more interesting way to do cardio and fell in love with mountain biking. I went out on a limb and spent a nice chunk of change on a Gary Fisher bike and hit the trails. I found it to be a great way to get out and get your adrenaline pumping and your fat to get burning. 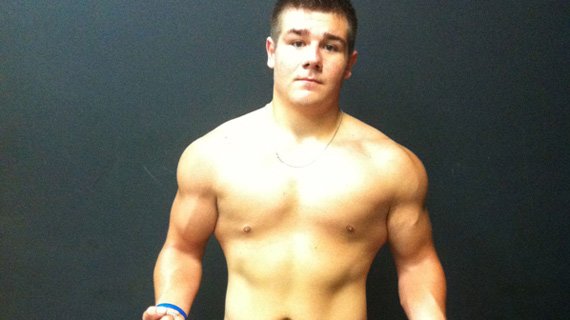 Eating right, lifting heavy, and doing some cardio will go a long way.

I found that just picking up on little things makes your lifestyle so much better, healthier, and active. I took a few boxing classes and played a good bit of pick up soccer to get in some extra fun cardio along the way.

Maybe it didn't help drastically, but what I did these last months helped me lose 80 pounds. It takes experimenting to find out what's right for you. Maybe YOU need to count calories or the other guy who lost 80 pounds counted calories. I didn't. Everyone's body is different, I remember reading about the "Warrior Diet" and trying it out for about 2-3 weeks and my body didn't respond as well as some others did. I lost weight on the it but I ended up feeling a little more tired than usual.

When it came to lifting weights I never had a partner so my rest periods were very short. I would feel like I was slacking sitting down, waiting around. Waiting for what? I would always annihilate my muscles (and still do). I didn't count too many reps; I just went to failure or near failure because of not having a spotter.

Go after your goals. People will discourage you along the way but keep your head up and your heart in whatever you want to achieve. I got bummed, hit plateaus, gained water weight and didn't think I would ever make it. Well, 6 months later and I can happily say I made it.

Do your own research and find out what will work for you. The research will never end because you can learn something new every day to help you out. I also suggest posting in the forums on the site. You can search and get answers to just about every single question imaginable.

Remember supplements don't get you shredded, YOU get you shredded. I suggest doing cardio, but do not think that if you eat a pizza then go run for an hour that you justified it. Eat right, lift hard, lose fat. Good luck. Peace.