Fruits and veggies don't have the meat factor to lure most bodybuilders, but health is about more than muscle! Cover your nutritional basics with fresh fruit! 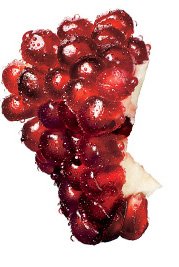 There's something important you're not doing - and you're far from alone in your torpidity, because most Americans are every bit as lax as you are on this score.

Too many guys aren't filling the recommended half of their plates with fruit and vegetables, and if you're part of this crowd it's something you'll need to address, because your diet is likely deficient in the vitamins, minerals, antioxidants, and phytochemicals your body needs for optimum health - and no, canned fruit and fruit juices don't count.

If an apple a day keeps the doctor away, the information on these pages might just put him out of business.

One medium-sized apple is a filling, ready-to-eat snack that is packed with four grams of soluble fiber - 17% of the Daily Value (DV), or the amount you need each day. "This is important for colon health and controlling blood sugar levels," says Elson Haas, M.D., author of Staying Healthy with Nutrition.

"It's also a good source of immune-boosting vitamin C." Apples also contain quercetin, which has antihistamine and antiallergy properties.

Research has shown that consuming high-glycemic carbs after workouts produces a greater amount of glycogen - replenishing what you've depleted after a hard session - than consuming carbs that are lower on the glycemic index (GI).

"Grapes are a very high-glycemic fruit," says nutritionist and physique specialist John Kiefer, "which makes them an ideal post-training snack."

They're also loaded with vitamins A, C, and B6, and folate, in addition to several essential minerals. 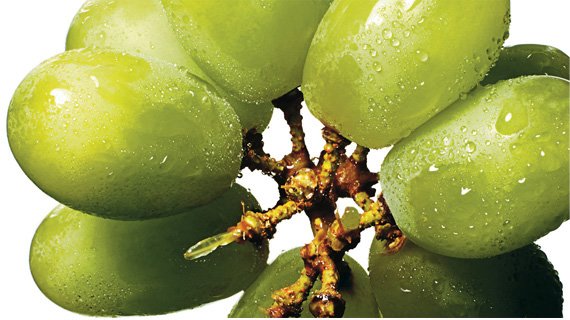 Jonny Bowden, Ph.D., author of The 150 Healthiest Foods on Earth, says inflammation in the body is the root cause of most disease and discomfort.

"Chronic inflammation can wreak havoc on your vascular system," he says, "but a lot of guys also suffer acute inflammation caused by sports injuries."

Studies suggest weekend warriors can ease aches and pains by eating tart cherries. These have the highest concentration of anthocyanins 1 and 2, which help block enzymes associated with inflammation.

HOW TO: Cut A Pomegranate

1. Slice the pomegranate into quarters, then separate the pieces with your fingers.

2. Working over a bowl of water, pull the seeds away from the peel. The seeds will sink to the bottom of the bowl.

3. Skim the excess off the top of the water, strain out the seeds, and enjoy.

If you've ever suffered from erectile dysfunction, try adding this "natural Viagra" to your daily diet.

Research shows that the powerful antioxidant agents in pomegranate seeds and juice can help reverse oxidative damage - what nutritionist Oz Garcia, Ph.D., calls "natural rusting" - to the vascular system, which plays a major role in the ability to achieve and maintain erections.

Perhaps this is why some theologians believe the pomegranate - and not the apple - was the forbidden fruit in the Garden of Eden.

Garcia recommends blackberries for their exceptional phytonutrient power and vitamin K content (36% of the DV).

"This is important for men because it's been shown to help lower risk of prostate cancer," he says. "It's also high in the mineral manganese, which helps support optimal testosterone production."

Blackberries - along with blueberries, bilberries, and raspberries - are also rich in the antioxidant lutein, which helps promote eye health by helping prevent macular degeneration.

The famous Scripps Clinic "Grapefruit Diet" study showed that participants who ate half a grapefruit before each meal lost an average of 3.6 pounds in 12 weeks.

"It's a great appetite suppressant," Bowden says. "It also contains pectin, a soluble fiber that's been shown to slow the progression of atherosclerosis."

Avoid eating grapefruit when taking prescription (or over-the-counter) medications, though. "It interacts with liver enzymes in a way that can keep the medication in your system longer than expected."

"The citric acid in lemons helps break down lipids and stimulates digestive juices," says Haas, who does a 10-day lemonade cleanse each year to reduce body fat and cholesterol. "Adding the juice of half a lemon to a glass of water every morning supports liver and gall bladder function."

Drink some fresh lemon juice before your next meeting. The energizing scent has been shown to mitigate fatigue, anxiety, and nervousness, and can increase concentration and alertness. 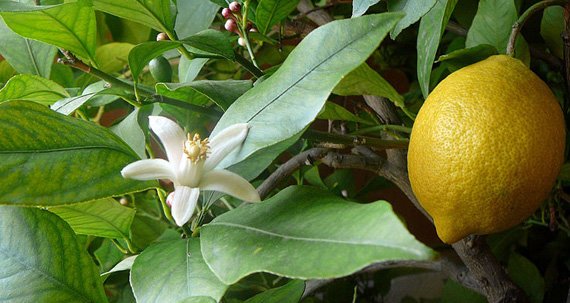 Papain, an enzyme in papaya, has been shown to relieve gas from indigestion. Another of its enzymes, chymopapain, has been used to relieve inflammation.

One cup of fresh, ripe papaya has only 60 calories, yet packs a whopping 144% of the DV of vitamin C (88mg). "When buying papayas," Garcia says, "look for ones that are mostly yellow and yield slightly to pressure."

His life reads like something out of a popular beer commercial, but adventurer Darin Olien neither plays jai alai nor chases mountain lions out of his kitchen.

Instead, he travels the world in search of underappreciated foods with exceptional nutritional profiles - with a particular focus on sustainability and fair trade.

Here are his top four fruits:

A staple of traditional Chinese medicine, it's one of the most nutrient-dense foods on the planet. 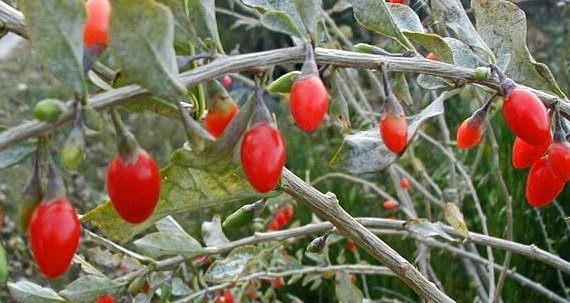 These purple-skinned berries from the Amazonian rainforest of Peru have a higher naturally occurring concentration of vitamin C than any other food. "The fruit generates vitamin C as a self-defense mechanism to ward off yeasts, molds, and bacteria," Olien says.

"That antioxidant power energizes your immune system, fights off free radicals, prevents disease, and can even lift your mood."

Also known as Indian gooseberry, Amla has been used in Ayurvedic medicine for 10,000 years to treat ailments from bed wetting to heart disease.

The pink-orange powder inside its bulbs contains eight essential amino acids, very high levels of fiber (including pectin), and triple the antioxidant agents found in blueberries.