Chris London Shed 16% Of His Body Fat & Got His Ripped Physique Back!

Chris wanted to get back the physique that he once had and not become unfit in his 30s. Learn how he whipped his body back into shape and sculpted a 6-pack in the process!

As an active teenager I was a keen rower. Competing at a high level in the UK meant daily training, cardio and a healthy diet. Following a 3-year stint at University I struggled to get back in to training regularly. I had a few years where I would get motivated for a few months before gradually falling back in to a bad diet and little exercise.

After a bad motorcycle accident in 2002 I was left with a shattered shoulder socket and a broken collar bone. This again naturally led me to fall back in to a normal lifestyle of drinking, smoking, and eating whatever I wanted.

In late 2007 I decided it was time to sort things out and get my ripped physique back that I had lost so many years ago.

My goal was to go against the grain of most guys approaching 30 who end up with the notorious beer gut and to prove it is possible to transform a fat, flabby, unfit guy in to a ripped physique. 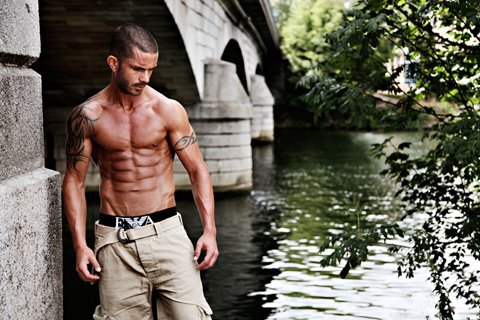 Click To Enlarge.
I Decided It Was Time To Sort Things Out
And Get My Ripped Physique Back.

I sort out a local hard core bodybuilding gym in Dunstable, UK called The Gym. Mark Etherden the owner turned out to be a long standing UKBFF finalist and had over 16 years experience in building muscle and sculpting a body.

Mark put together a training plan for me to slowly rebuild the strength in my injured shoulder and start transforming the fat to muscle. Initially my plan consisted of getting back to basics and building a strong core so heavy compound movements on all body parts was essential. For over a year I pounded away knocking out 100's reps of squats, leg press, deadlifts, chest press and shoulder press a week. As the muscle started to build I soon noticed a big transformation in my overall body shape. This gave me the motivation to get serious about my training and diet.

Mark and I then put together a strict training and diet plan with the aim of dropping bodyfat to single figures whilst building as much lean muscle as possible. Mark and I trained 5 days per week as I supported him in his training for the 2009 UKBFF finals.

Training with a competitive bodybuilder meant that I was rapidly building a very strong frame. I soon found that pound for pound I was one of the strongest guys in the gym regularly squatting and leg pressing more than guys way bigger than me. This just gave me even more motivation. 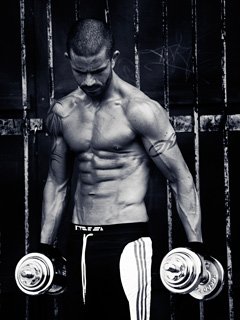 Click To Enlarge.
I Soon Found That Pound For Pound I Was One
Of The Strongest Guys In The Gym.

By the summer of 2009 I had dieted down and the transformation was massive. Although not carrying lots of muscle size I now had a lean, muscular physique and a six pack! A world apart from where I had started 18 months ago.

Over the next 6 months I used the winter to grow and managed to add on over 5kg of lean muscle bringing me back up to the 75kg I had started out at but looking very different. With the summer of 2010 approaching it was time to diet down again and see just how ripped I could get.

I had an opportunity to do a photoshoot for a potential magazine feature and supplement sponsor so a date was set and I dieted as hard as possible. For 6 months I stuck to a super strict clean diet, high volume training and lots of cardio.

Since the last photoshoot I have not stepped off the pedal and I am now about to do it all again for the UK magazine 'Beef' and an article in Flex. This time we are shooting a feature with Mark Etherden and me in training.

My biggest thanks must go out to Mark for all his support and motivation. I can now say I am pleased to call Mark one of my closest friends and I wish him all the best in this year's UKBFF 2010 finals. 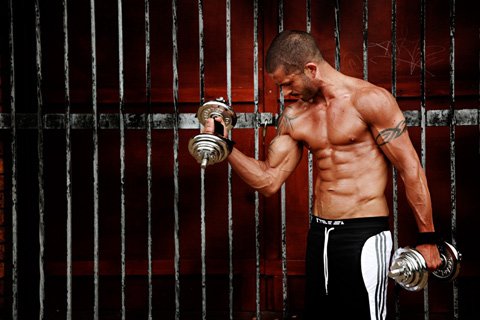 Click To Enlarge.
I Now Had A Lean, Muscular Physique And A Six Pack.

My best advice is to set yourself a goal and don't give in! Once you start to see some progress this will motivate you to keep going. Reward yourself once per week with a good cheat meal then eat clean for the rest of the week.

Go back to basics! Squat heavy! Build a strong core and this will really help with burning the fat! Everyone can change if you want something enough!

You need to find a good training partner who will push you on every rep. Don't try and be a show off and squat 180kg and only do a half rep! Drop the weight and get your ass to the floor! Good form is everything.