Body Transformation: Rose To The Challenge!

It took Anna 30 years to ditch her 'someday' attitude and build a body fit to compete. At age 52, she unveiled the best physique of her life! See how you can too!

My twin sister loved playing all forms of sports since from the time we were little girls. We dressed exactly alike and did everything together, but I was the reluctant athlete. She dragged me to the park where I grew tired of watching everyone play softball, football, and basketball. They looked to be having fun while I sat like a lump on a log. Eventually, I started playing and had to work harder than my sister to obtain average skills because sports came naturally to her. Surprisingly, it took my mind off a difficult home life and became enjoyable.

In high school, I played field hockey, basketball, and ran track. I wasn't a great athlete, but it was fun. In the following years, I gave up sports that involved running and found the gym. Working out was a stress reliever. I worked off and on, sometimes in decent shape, sometimes way out of shape, but wasn't concerned about my size or health. The only exception came when I was a size 16. I hit the gym to cut weight, but didn't make a mental connection between my weight, the circumference of my waist, and my health.

At age 47, while living in Houston, Texas, my twin and I got a call that our little sister was ill in the hospital. That same day, my boyfriend of four years was in the process of moving out. The moment he was done packing, my sister and I jumped in the car and drove to San Diego, but we didn't make it in time. My little sister was in her early 40s and died from a culmination of health issues. 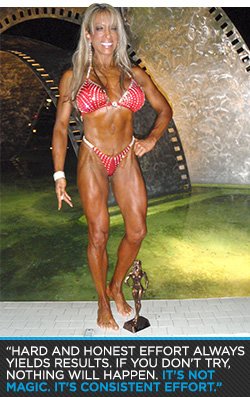 The next year, I planned to move to Los Angeles and was there on a business trip when I got a frantic call from my niece that she found my twin passed out and non-responsive at home. I flew home immediately. She never came out of her coma and a week later was taken off life support and passed on; she died at age 48 from high blood pressure, smoking, and weight issues. This was eight months after I lost my little sister and ended a long-term relationship that hurt my heart deeply.

I was an emotional wreck, but started a new job in a new city and had to keep it together to carry on. The next year, my older sister passed away from a long illness that kept her bedridden for 10 years. That same year, my mother in law went to the hospital because she wasn't feeling well, got an infection in the hospital, and died. She was the mother I always wanted, but never had until she came along with her son when I was 27 years old. I was struggling and needed something positive. It finally came when I quit saying "someday."

You owe it to yourself and the people who love you to take care of your body, mind, and soul. You owe it to the higher power above to take care of what was entrusted to you—the gift of life. Chase your dreams. As Nike famously put it, "Just Do It" and get the body and life you want. Hard and honest effort always yields results. If you don't try, nothing will happen. It's not magic. It's consistent effort.

I've been a bodybuilding fan since my 20s when I attended shows and read magazines. Back in the day, I was watching ESPN with Carla Dunlap, Cory Everson, Boyer Coe, and Shawn Ray. This was way before DVR, so I got up early before work to watch and learn whatever I could and said "One day, I will compete."

It took me 30 years and an awesome trainer, PJ Drew Braun, to actually compete, but I did it. Before contacting PJ, I built my knowledge on Bodybuilding.com. I followed Kris Gethin's 12-Week Hardcore Trainer, saw great results, and decided to compete. I love listening to bodybuilding podcasts. I came across a new show called Iron Empire. One of the co-hosts was PJ Braun and the show was intelligent, funny, and at times, hilariously inappropriate. The more I listened, the greater respect I developed for PJ. I could tell he had extensive practical and theoretical knowledge. His honesty, heart, and passion for what he does are clear.

After a few weeks of listening to the show, I was excited to start training with PJ in February. I competed and won my class in my first NPC figure contest. It took PJ less than seven months to build my confidence to step on stage. He gave me the diet, workouts, encouragement, and feedback while IFBB pro, Sabrina Taylor, coached me on presentation. They took me from a shy person with minimal confidence to someone who had confidence to find fun in competing. I'm prepping for my second competition on October 19, 2013, which is also my birthday.

The most challenging aspect is the diet. I'm the world's biggest cookie monster. Having a goal to compete keeps me in check most of the time. Fortunately, having 1-2 cheat meals per week gives me a mental and physical boost.

I'm not sure how long I will compete, but I will always improve and never look back.

Plan your week and get ahead on Sunday. Write your menu and post it on the refrigerator and pack your meals in baggies or Tupperware. Write your workouts or choose a great training regimen on BodySpace—you can't go wrong. There are several exercises and videos readily available on the site for advice and encouragement.

I use Bodybuilding.com extensively to buy supplements, watch videos, and harvest inspiration. I see others who transformed and read their stories and tips. I used personal trainer SteveP78, who was great, and Kris Gethin's 12-Week Hardcore Trainer.

There are no excuses because the online training and BodySpace are free. It's the greatest resource ever. I learned how to take glutamine from Ava Cowan, how to make turkey muffins from Jaime Eason, and how to take creatine from Dr. Jim Stoppani.

Start Your Own Transformation Today