6 Tricks For A Stronger Squat!

Looking to turn the heat up on your squat regimen? You've come to the right place. Step away from the norm and address the weaknesses that hold you back!

In many serious lifters' playbook, the squat is the go-to lift for developing serious lower body strength and size. It no doubt gets the job done, but as with all exercises, there will come a point where you feel like you've hit a ceiling. You know you should be able to move more weight around, but your muscles just don't seem to cooperate. At times like these, a temporary vacation from the same-old squat routine is in order.

Don't worry, after you try one or several of these tried-and-true techniques, you can always come back to the squat variations you know and love best. In most cases, you'll be stronger and more balanced when you do.

It's amazing how simply shifting the work from two legs to one leg can exponentially crank up the difficulty. You might think, "Ok, I'll just squat half of the heavy load I've been moving in a back squat," but in most cases, you'll find that weight laughing at you the first time you try it.

The increased balance demands of single-leg squat variations make them highly difficult to the unaccustomed, but they are worth it! Stick with them until you find your footing. Unilateral exercises also confer additional benefits in correcting side-to-side muscular imbalances, which many people find to be a key to building even greater bilateral (two-leg) strength. 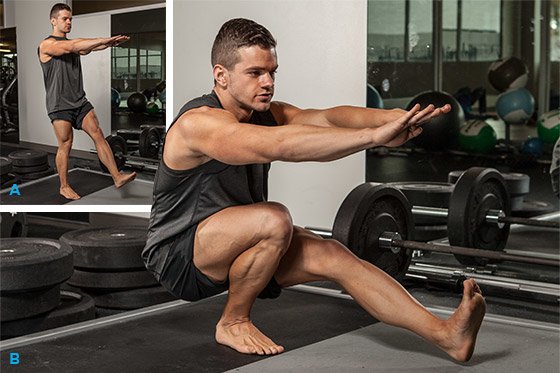 While there are many one-legged squat moves to choose from, my somewhat unorthodox recommendation for you, if you struggle to improve a barbell back squat, is to try the pistol squat. Tread lightly! Even bodyweight pistol squats can be extremely difficult for most lifters, at least in the beginning. The initial instability produces more muscle engagement, and the high level of muscle control this exercise demands may initially force you to hold onto something for balance. There's no shame in that, I promise!

In the beginning, perform this exercise with bodyweight only until you can safely and confidently hit six consecutive reps. After you've done this for a while with good form, you can start adding weights, either by holding a dumbbell plate, a kettlebell, or a couple of light dumbbells held straight out in front of you. Once you can perform 6 good-form reps with a weight between 25 and 45 pounds in your arms, you should see a notable improvement in every other lower-body lift.

In a standard back squat, most experts would direct you to point your feet straight forward, or perhaps ever-so-slightly outward. A small adjustment in your foot position, they know, can cause a significant shift in the muscles that are worked.

Following that logic, try this on for size: Spread your feet slightly past shoulder-width and point your toes outward at a 45-degree angle. This adjusted position is called the sumo squat , and it will develop strength and mobility of the hips, adductors, and glutes to a greater extent than a narrow-stance squat. 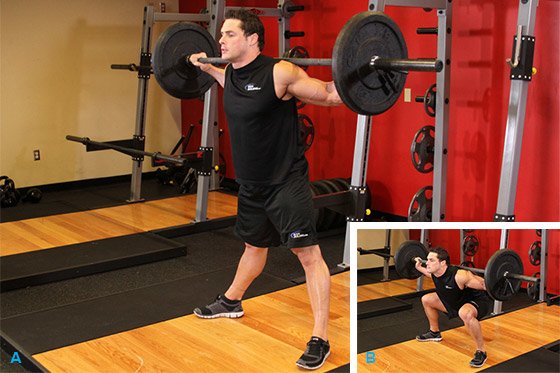 Some people may find this position to be more comfortable for their individual body, and it becomes their go-to squat. That's great for them, but make sure you do it right before you fall in love. Ensure that your knees don't spill too far over your toes when you drop it low. And, perhaps even more importantly, don't flare your knees inward as you bottom out. Get them out wide over your toes!

3
Pause At the Bottom

Are ya ready to feel your quads and buns burn? Try pausing at the bottom of any squatting movement. This applies to front squats, back squats, pistols, and all other variations you see in the gym. This pause eliminates the stretch reflex in the muscles, and thereby forces the muscle to generate more "true" force to be able to complete the squat.

What do I mean by "true?" At the bottom of a deep squat, the stretch in your hamstrings and adductors helps you bounce out of the hole to some degree, even if it doesn't look like a "bounce" per se. Envision pulling back a rubber band to a stretched position; it is now primed to spring back to its normal elasticity with even greater power. Adding a brief isometric contraction of about 2-4 seconds makes this "bounce" impossible, and has the potential to improve strength and power production from the quads, hamstrings, glutes, and other lower-body prime movers.

Some lifters find this to be such an effective technique that they perform at least some sets starting from the bottom. This is known as an "Anderson Squat."

4
Add Half-Reps From the Bottom 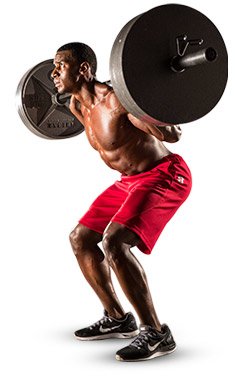 Trying new squatting variations is only one way to attack a squat that doesn't seem to be progressing. Another is to take your current form of squatting and simply make it more difficult. A great way to accomplish this is to perform half-reps from the bottom.

These are just what they sound like. Sink down into a full squat, and then rise up just halfway. Pause, and then lower back into the hole before pushing up into the full standing position. Sound easy? In execution, it's anything but. This technique places more stress on your muscles during your weakest point of the squat movement pattern, which allows you to build strength where you need it most. Just don't call me when you can't sit down comfortably for the next few days.

Few people are able approach their normal squatting volume with half-reps being added in, so take it slowly. Add 1-2 half reps per set to start, and build up until you can perform a full set with a half-rep in between each full rep.

When someone mentions the squat in casual conversation—what, your friends don't do that?—-most people imagine the back squat during which the bar is placed behind the neck. But that is only one type of loaded squat, and to be honest, it isn't right for everyone. Some people simply never feel comfortable with the spinal compression that results from having a barbell sit on top of their back. Others find that for reasons of balance, knee strength, or something else, they are able to achieve far superior form with other variations. Open your mind and your squat will feel the benefit! 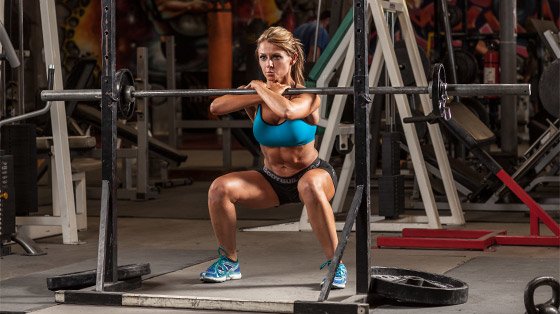 "In comparison to the back squat, the front squat hammers the quads more and calls for additional muscle activity from the hips and lower back."

Most athletes find that maximal weight they can front squat will be approximately 80 percent of a back squat's maximal lift, so bragging rights aren't quite the same. But in recent years, having a strong front-squat max has become cooler than ever, and is often taken as a sign of being an overall well-rounded athlete. And you'd better believe boosting your front squat will help your back squat grow, too!

Common sense says that the only way to develop a heavy squat is to squat heavy. Sure, that's part of it, but there is another proven method: squat fast. Bar speed is often overlooked because it often makes the exercise feel "easy" or less productive, but cranking up the velocity of your squat can help your squat immensely by allowing you to practice technique while still training for peak power.

So what exactly makes it a "speed squat?" Perform the squat at a smaller percentage of your max. Depending on your repetition range and volume of work you want to get done, this can range between 35 and 70 percent of your one-rep max. For heavier loads, lower the rep scheme; the lighter the scheme is, the higher reps should be. You can perform a set portion of a leg day for speed, or if you're really dedicated to squatting, you could split your week into light and heavy days.

Another way to add power to the squat is by performing bodyweight squat jumps. Drop down into a deep bodyweight squat and launch yourself off the ground as high as you can go. Land quietly, meet the balls of your feet to the floor, and bend your knees slightly to absorb the impact. Drop back into the squat position and continue your reps in this fashion. As you would in any exercise, maintain proper form throughout, being mindful of spine and knee positions. Don't lean too far forward or let your knees pass too far over your toes.

Give one or all of these tips a try on your next lower-body training day, and share your experience in the comments below!

Want to know how cover models build such perfect bodies? Here are 6 secret weapons they use to set themselves apart!

8 UNDERRATED EXERCISES YOU MUST TRY

WOMEN AND PROTEIN: YOUR COMPLETE GUIDE

Protein is an essential component of the muscle-building process. Yet, many women stray away from consuming enough protein for maximum results. Let go of fear, bust through myths, and learn about the power of protein!