8 Underrated Exercises You Must Try

Do you suffer from exercise tedium? The symptoms include doing only exercises that you're familiar with, seeing progress come to a standstill, looking forward to the end of a workout, and a lackadaisical attitude toward exercising in general.

If you nodded yes to any of these, you're likely straddling that line between complacency and boredom.

Exercise tedium occurs when you've stuck with the same routine for so long that you cruise through the movements on auto-pilot. Sure, you do them really well, and they're easy, but let me shatter your world: Doing them probably no longer carries over to noticeable fitness gains. You need something new, something exciting.

So how about strange exercises that squeeze in a surprising amount of value and functional benefits for your body? Check out these eight highly underrated exercises and try them out in your next workout for a spicy challenge worth getting excited about.

Your first reaction might be to chuckle a bit at the unconventional name, but you probably won't find any humor in attempting this highly technical move for the first time.

Some folks refer to the Turkish get-up as a "technical get-up," named thusly for the efficient and smooth transition from lying on the ground to getting up on their feet. This is not as easy as it sounds. A correctly done Turkish get-up commands extreme muscle control and emphasizes the quality of the movement rather than the speed of its completion.

"This exercise forces a focus on the quality of movement rather than the speed or weight, and will help to establish the link between the upper and lower body while improving mobility and stability," explains Marc Megna, ex-NFL athlete and performance coach. 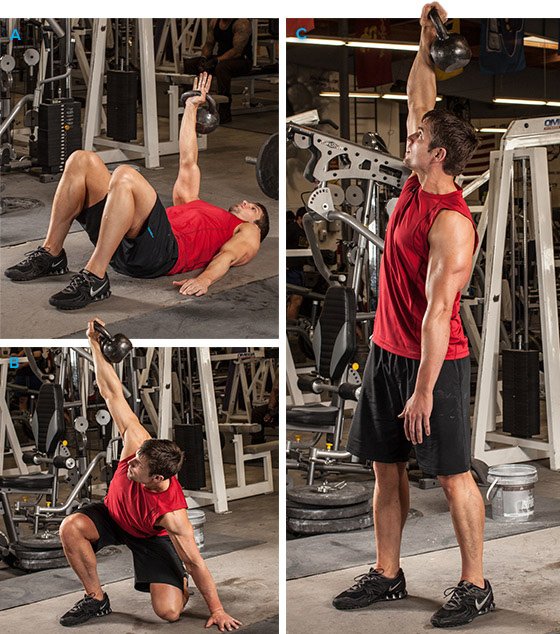 
This is a highly advanced succession of movements; describing them here step-by-step would not do this exercise justice. Check out the video below while keeping the following tips in mind:

How To: Kettlebell Turkish Get Up
Watch The Video - 09:26

Take note that getting up and going back down in this manner constitutes one rep on one side. Now try doing 10 reps on each side for a real workout! You can up the ante by adding weight in the form of a kettlebell or dumbbell. Don't get so ambitious that you begin to compromise form.

Because this challenging exercise essentially teaches you how to get up from the ground in a controlled and efficient manner, it provides great functional value to everyday life as well.

Already a fan of lunges? Then you'll be glad to add this to your arsenal, especially if you're looking for an athletic edge in the sports field.

Although the movement is essentially the same and targets the same muscle groups as a normal lunge and reverse lunge, the elevated reverse lunge really hammers the gluteal muscles and quads, as well as developing more single-leg stability. The extra elevation in the front leg takes you through a much deeper range of motion, which helps open up the hip flexors and flexibility of the rear leg.

Get a platform that rises up to about shin level. The starting position would look as if you're about to step up onto the platform, with the front leg bent and firmly planted on the platform. Activate your glutes and drive up on the front leg to bring your rear leg up while always keeping your chest up. Return to your starting position in a slow and controlled manner. You've just completed one rep. Now do nine more and hit the other leg!

When you first start out, use less weight than you normally would to get used to the movement pattern and to make sure you have adequate flexibility to perform the movement correctly. Your efforts will be rewarded with improved speed and push-off in explosive movements like sprinting.

Whether your goal is focused on strength or physique, the single-leg squat (also known as the pistol squat) can help. The unilateral exercise demands such strength, control, mobility, balance, and coordination—basically most tenets necessary for any athletic feat—that the single-leg squat will be challenging to approximately 99 percent of all lifters ... in the beginning.

Once you get it down, though, the single-leg squat provides numerous benefits in developing leg and core strength, as well as improving sports performance. A big upside to single-leg squats is that it is particularly forgiving on the lumbar spine. You can still target the legs while reducing compressive forces on the spine.


Additionally, "it adds musculature to the glutes and adductors, which are not recruited as heavily during the typical double-leg squat," explains Marc.

Check your ego at the door; the progression must be slow and steady. When trying this out for the first time, hold onto an object for balance and slowly drop into a squat with one leg—kept as straight as possible—pointing forward. As for how deep you go, use a box or bench as the initial reference point. Only when you get better at this should you attempt to do it without a balancing aid.

In the beginning, don't go for depth but go for form and stability. As you progress, increase the range of motion by getting deep enough that the femur of the working leg reaches parallel to the floor. Avoid rounding your shoulders or leaning excessively forward, and keep the spine neutral as you would in a bilateral squat.

Once you advance to the point of controlled reps to parallel, trying loading the exercise for extra challenges. Keep in mind that mastery takes time, especially with this exercise. You will not be able to pistol squat properly and without injury unless you follow a safe trajectory of progression.

The Y-Press is an interesting variation of the overhead press that ends with you looking like a human letter Y, making the Village People proud. The 45-degree angle at which your arms extend overhead will place you in a mechanically weaker position and fire up your stabilizers to a greater degree, making this a fantastic exercise for building shoulder stability. It's not exactly designed to encourage hypertrophy.

To perform the Y-press, get ready as if you were about to perform a shoulder press but press up and out at an angle until the arms form a Y. Be sure to keep the shoulder blades down when you do this and use itty-bitty weights. Don't be embarrassed by the jeers and snickers, because while everyone else around you might blow out their rotator cuffs with too heavy of a weight, you'll be strengthening stabilizers such as the supraspinatus.

Want a bigger challenge? Try holding at the top of the movement before you lower your arms.

Kettlebells have spiked in popularity in recent years, but they're still heavily misused and underappreciated. Despite how the full movement looks, the kettlebell swing is designed to generate explosive power from the hips and glute-hamstrings contractions. It's a great exercise to jolt awake your heinously underused glutes, helping to improve horizontal force generation (as in sprinting) and lower-body strength development.

"It's safer than other power development exercises like Olympic lifts or jumps; it spares the back and other joints because of the lighter load and lack of impact," Megna states.

The motion mimics that of a pendulum, where the primary point of flexion occurs at the hips—everything else remains relatively stable and neutral. Start with the kettlebell on the floor in front of you and your hips hinged. Keeping the back braced and neutral, you lift the kettlebell slightly off the floor and thrust forward to build momentum. It should take almost no effort from your arms to propel the kettlebell forward.

When it comes back down, let it sail between your legs and thrust forward with your hips again to drive it back forward. There are two variations: in one, the acme of the swing ends at eye-level, and the other is overhead. The latter endpoint, often referred to as the American method, works additional stabilizer muscles.

If done incorrectly, the kettlebell swing can hurt your knees and lower back. Be sure to ease into this exercise with a lower weight until you lock down the movement.

If you're easily cranking out 50 push-ups in your sleep, it's time to throw this giant box-shaped wrench in the exercise. Cue the box push-up. The box push-up serves as a gnarly next step in your push-up progression, allowing you to attack smaller stabilization muscles in your harder-to-reach lower chest and, of course, break the monotony of a standard push-up.

The ideal box height would be about 12 inches off the ground, which could change depending on your own height. Position the box where you'd normally place your hand in a push-up and lay one hand on top of it. With the other hand still on the ground, assume the push-up position. Maintain good form as you drop your chest to the floor.

On your ascent, simultaneously transfer the hand on the floor to the box and the other hand on the box to the floor. Remember that good form means avoiding an arched back, squeezing the shoulder blades at the bottom of the push-up, and maintaining a neutral spine. (Ideally, you should be able to balance a bottle on your back.)

While your chest muscles (and psyche) can benefit from a push-up variation, do not attempt this exercise if you have nagging shoulder pain or an injury.

"This exercise has very little eccentric demand, therefore will help to reduce your chances of injury and soreness," explains Marc. "It's a single-leg movement pattern that will really help to enhance the development in the quads, hamstrings, and glutes." 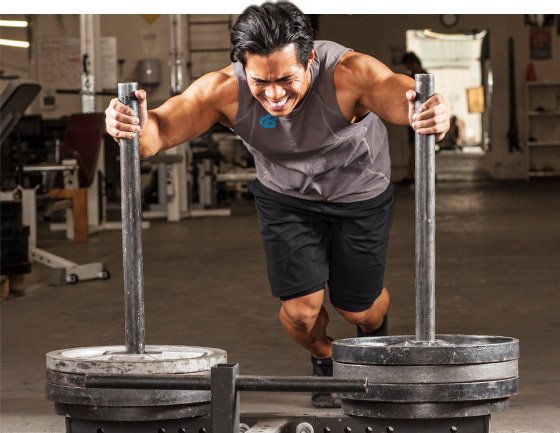 
Obviously, you first need access to a sled, but you can fashion together a makeshift version if you're the do-it-yourself type. This conditioning exercise is best performed outdoors or on a surface that you don't mind getting scuffed up from the sled.

Whether you have a prowler sled (one you push) or a training sled (one you pull), the idea is the generally the same: Dig your toes, drive the knees up, and push, push, push. Make sure the bulk of the power generation originates from your lower body. If you find yourself pushing the sled with your arms instead, keep your arms locked and refocus on driving with your legs.

Obviously the more loaded the sled, the more challenging and taxing the push becomes.

Planks are an awesome core exercise. Once they start to feel easy, however, they can be a snooze-fest. Here's a variation that'll liven things up again.

This cleverly-named modification challenges your additional core muscles such as your anterior core, and improves shoulder stability.

Place a medicine ball beneath you—where you usually place your elbows—ensuring that your shoulders are aligned above your elbows. With feet together, move your elbows in a circular fashion, as if you were trying to "stir a pot" using your elbows. To fully engage your core, the rest of your body should stay still while you stir it up.

For an additional challenge, elevate your feet on a 12-inch box, which will give you a bit more serratus anterior recruitment for further improved shoulder health.

Here's hoping these eight exercises will light a fire under your butt and help you break out of exercise tedium. Do you have an exciting exercise you want to tell everybody about? Let us know in the comments below so that no one has to suffer from exercise tedium again!