10 Fitness And Nutrition Mistakes Made By Women!

Want greater fitness success? Stop making these 10 mistakes - these misconceptions seem more common among women and are perpetuated by media, fads, etc. These mistakes are hard to shake. Below is my response.

While I initially specialized in fitness and nutrition for men, a growing number of female friends, acquaintances, and potential clients have been soliciting my advice and services. Given women's markedly different fitness needs and goals, I began to incorporate my knowledge of nutrition and exercise to build regimens and routines for the fairer sex.

Through casual conversations and comprehensive discussions with women, I have found that the same misconceptions are reiterated by fitness novices and experts alike.

While these misconceptions surely exist among men, they seem more common among women. Perpetuated by the media, fads, and fashion magazines that carelessly dispense fitness advice, these mistakes are almost ingrained and therefore hard to shake. Below is my response.

1. I Need To Lose Weight

When speaking about fitness and nutrition, this is the most common phrase uttered by women. While it is true that many overweight individuals (both men and women alike) need to lose drastic amounts of weight for health reasons, many who utter this phrase want to lose body fat, not weight. What's the difference?

If weight goes down, doesn't body fat follow? Not necessarily. For many, an exercise regimen that includes cardiovascular and resistance training increases muscle while eliminating body fat. 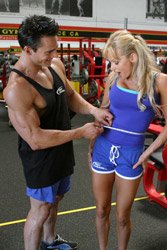 The overall effect is a tighter, more toned physique, but body weight could stay the same or even increase. Therefore, the obsession with numbers on a scale is unfounded; one can greatly improve appearance, enhance fitness levels, and eliminate unwanted fat all while maintaining a constant weight. Focus instead on a combination of body fat measurements in trouble spots and the image in the mirror.

Again, the numbers on the scale are of little importance in the short run. I hear too many women expressing genuine concern over a fluctuation of two or three pounds in bodyweight.

There are so many factors, none of which have to do with "getting fatter," that could have caused such a minor gain, so there is no need for panic.

Water weight can also be a culprit of minor differences, and this too has nothing to do with a permanent weight gain. Therefore, the scale should only be consulted about once a week and the long-run changes are what matter.

To many women, the word diet implies two things that are notorious saboteurs: deprivation and an end-date. Whether it's the grapefruit diet, Atkins, or some other fad diet in the latest fashion magazine (that's why they're fashion magazines, not health magazines), diets require deprivation. They force the follower to give up enjoyable foods, endure intense hunger or some combination of the two, which usually leads to intense cravings and even more intense binges.

A second thing that diets imply is an end date, a day when the h#llish deprivation comes to an abrupt end. So after that spring break trip, high school reunion, or wedding day, many women gain back even more weight/fat than they originally carried. This is because they feel entitled to finally eat the foods they love after a prolonged diet, and a week of carefree eating somehow turns into a month, then a year.

The way to avoid these pitfalls is to develop healthy eating habits instead of relying on crash diets. Eat nutrient-dense foods in small, frequent meals to stay satisfied and embrace portion control so that you can enjoy the foods that you love. 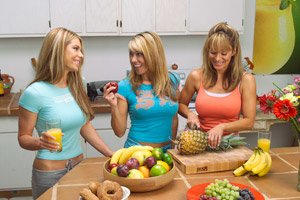 Exercise moderately, incorporating fun and variety to workouts to avoid burnout and boredom. Health and fitness should be lifelong goals, not 4-week tours de force.

4. I'll Be On The Elliptical If You Need Me

The idea behind some people's religious devotion to the elliptical machine lies in the belief that since cardiovascular exercise effectively burns body fat, any form of cardio will suffice.

First of all, a nutrient-dense diet combined with both cardiovascular and resistance training is shown to trump diet and cardio alone, but that is not even my main gripe.

Research has consistently shown that the elliptical, although easiest on joints, is worse than the treadmill, stationary bicycle, and rowing machine (not to mention activities such as swimming and intense hiking) when it comes to elevating heart rate and burning body fat. This is due to the fact that movement on these machines relies heavily on momentum and not resistance or the propelling of one's bodyweight. All these months of elliptical training has yielded mediocre results, and now you know why.

5. I'm Going To Give Diet Pills A Try

Do you know what Yohimbe is and how its affects the body? Do you know why there was so much concern around Ephedra? Do you consume too much caffeine? If you are not intimately familiar with these substances, why would you put them in your body day after day?

Before taking these pills, an individual should consult a physician to assure that he/she is in good health. Diet pills achieve fat reduction and weight loss by stimulating the body's systems (thereby increasing metabolism), which can put extra strain on vital functions and organs such as the heart.

Also, diet pills are just a tool; effort is still required to make every tool perform. Just because you pop a capsule a few times a day doesn't mean that you can eat junk, skip workouts, and achieve that ideal physique.

In short, diet pills should be employed after starting and maintaining a regimen as that last resort to break through a plateau. They can be very dangerous if used improperly or abused or use caution.

6. I'll Have The Salad, Please

Salads can be a great source of nutrients while being low in saturated fat and simple carbohydrates. The key word is "can." Too many times I see individuals pass up perfectly healthy sandwiches and entrees, opting instead for a salad drenched in dressing, bacon bits, and croutons. These items, loaded with fat and calories while scant on nutrients, will not only sabotage a diet but will often fail to make you full.

In order to construct a truly healthy salad, focus on nutrient-dense, low-calorie items such as spinach, broccoli, tomatoes, etc and mix in some lean proteins, beans, nuts, and low fat cheeses for flavor and texture. 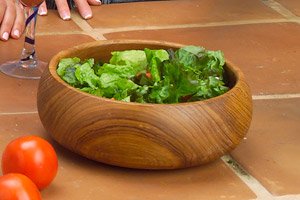 Click Image To Enlarge.
Focus On Nutrient-Dense, Low
Calorie Items For Your Salad.

The best feature of salads is the variety that can be created, so keep things interesting and flavorful. If you prefer the mixture of dressing, bacon bits, and croutons with some greens mixed in, you might as well have some pizza or burgers to at least fill you up. As you can see, not all salads are created equal.

7. I Try To Skip Breakfast

Study after study confirms that individuals who eat a balanced breakfast complete with carbohydrates, protein, and healthy fats lose more weight than those who skip this meal. Why?

After a night of fasting and inactivity (AKA sleep), an individual's metabolism is slowed to a crawl. Think of breakfast as the spark that ignites up your body's metabolic fire, setting you up to burn calories for the entire day. More importantly, though, a nutrient-dense, satisfying breakfast prevents overeating later in the day.

While it is true that skipping breakfast equates to zero calories for that meal, it sets you up to consume many more calories throughout the day, when food choices probably aren't the healthiest.

So if your goal is to shed body fat or lose unwanted weight, eat within 45 minutes of waking up. Breakfast can be as simple as a low-fat yogurt with a piece of fruit, so the "I don't have time for breakfast" excuse won't work.

Some swear by push-ups to rid themselves of that unwanted flab around the triceps, others are devotees of crunches to expunge belly fat, while still others try lunging their way to less cellulite on the backside.

Whatever the exercise and whatever the body part, this approach is called "spot reduction," whereby an isolation exercise is performed to tone a specific area. It simply doesn't exist.

You cannot reduce body fat in one spot. While isolation exercises will undoubtedly strengthen the target muscles, the fat surrounding these muscles (and the fat everywhere else on the body) can only be reduced by consistently being in a hypocaloric state (burning more calories than consumed).

This is why anyone with a six-pack will tell you that crunches are not the key. So it does not matter if the goal is tighter arms, a small waistline, or a toned backside; decreasing consumption and increasing cardiovascular activity are the paths to success.

9. I Don't Lift Weights. Lifting Will Make Me Bulky.

An overwhelming number of women avoid the weight rooms of local gyms and health clubs because they firmly believe that resistance training, whether it is free weights or machine-assisted weights, will result in an undesirably bulky physique.

This misconception stems from the fact that nearly all men achieve noticeable gains in muscle mass after beginning a weight training regimen. Because it stems from personal observation and is partially true, it is quite difficult to combat. 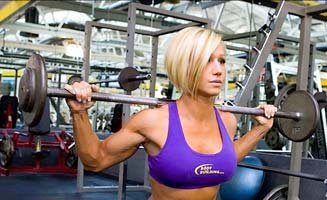 Click To Enlarge.
You Will Notice Tone, Not Bulk.

Yes, regular weight training will result in increased muscle mass. However, there is a certain type of training necessary to achieve these gains in size, training that involves heavy resistance and volume. By keeping the weight at about 40 to 50% of maximum effort and increasing repetitions for a cardiovascular effect, you will notice tone, not bulk.

There are two pieces of information I would like to convey here. "Reduced fat" is a relative term and just because an item is labeled such does not mean that it is low in calories.

For example, if one serving of a certain food contains 60% of the daily recommended fat intake, reducing that amount to 30% is considered "reduced fat," and will probably even be marketed as "half the fat of the original!"

However, 30% is still a lot of fat for one serving, so considered absolute values like how many grams of fat, carbohydrates, protein, etc. are consumed instead of relative values like "50% less fat." Additionally, reaching fitness goals is largely about calorie intake. More body fat and unwanted weight will be gained by eating 500 calories of a low-fat item than by eating 100 calories of a high-fat item, so keep this in mind.

If there is a loss of control or guilt when eating diet or low-fat items, it is probably better in the long-run to consume the higher-fat, higher-calorie counterparts in moderation.

Anthony Lee is a certified personal trainer who is trying to help others achieve their competitive and fat loss goals.