How, Why, And When To Use Wrist Straps

To strap or not to strap? The question has become far too loaded. Here's the only wrist-strap guide you need to read before you step up to the bar!

Walk into any weight room today, and you're pretty much guaranteed to see it: a long strap, usually black, dangling from the end of a lifter's arm as he or she walks around between sets. As that lifter sets up, he or she performs a little squirming dance to attach the strap to the barbell, kind of like a bull rider preparing for their 8-second adventure. When the strap is tight, the lifter's muscles tense, and the weights move like nothing.

What's going on? In simple terms, wrist straps are sewn pieces of cloth or leather that loop around your wrist and the bar that make it easier to hold on to a heavy weight. They are commonly used by bodybuilders and casual gym-goers, but wrist straps can be extremely valuable to powerlifters and other strength athletes, too.

But that description doesn't even begin to capture the immense arguments that happen online about straps. What are they good for? What aren't they good for? Are you less of a beast if you wear them, or are they the key to becoming a beast in the first place? Here's what you need to know.

Jason Ferruggia once wrote, "No straps, no traps." Never have four truer words been spoken. Well, maybe truer words were spoken a few times, but never by someone with traps like Jason's to back those words up.

Plenty of Internet tough guys will scream and shout that straps are "cheating," and you should never use them. From a certain perspective they have a point, because straps aren't allowed in powerlifting—although they are often allowed in strongman competition, for what it's worth. And while I always preach specificity for powerlifting training, if used carefully and selectively during prep, straps can help you make strength and size gains that will directly carry over to your main lifts.

Perhaps the number one benefit of using straps is that they allow you to fatigue the target muscle without worrying about your grip failing first.

Perhaps the number one benefit of using straps is that they allow you to fatigue the target muscle without worrying about your grip failing first. This is in direct accordance with the "right link/wrong link" rule that should govern just about everything you do in the weight room.

You don't know that rule? You should. It was introduced to me by my grad school professor, Fred DiMenna, a former pro bodybuilder with a PhD in oxygen uptake kinetics (yeah, he's smart). He helped hammer home to me the importance of this simple test when selecting an exercise.

If the answer to each question isn't the same, it's a lousy exercise. Fred always said that exercises needed to be hard not just for the sake of being hard but for the right reasons.

So, if your intent is to improve the size and strength of a certain muscle group, and using straps improves your ability to do so, wear them without shame!

All these exercises are intended to improve muscle size and strength in the upper back, traps, and hamstrings—not to directly train a competition lift. Therefore, there's no reason not to wear straps, especially if you can't hold on to the bar long enough to fatigue the target muscle group.

How to Put On Your Wrist Straps

Putting on your wrist straps and attaching them to the bar can be tricky. Wrapping technique will vary based on the length of the strap and where the loop is sewn.

Everyone has their favorite method, but here's mine: I find it easiest to wrap one hand exactly where I want it, then wrap the other hand closer to the already-wrapped hand (so I can use it for help with the wrapping process), then slide the second hand into position.

There are three main styles of straps to choose from: loop straps, speed/Olympic straps, and hook straps. Here's the bottom line on each. 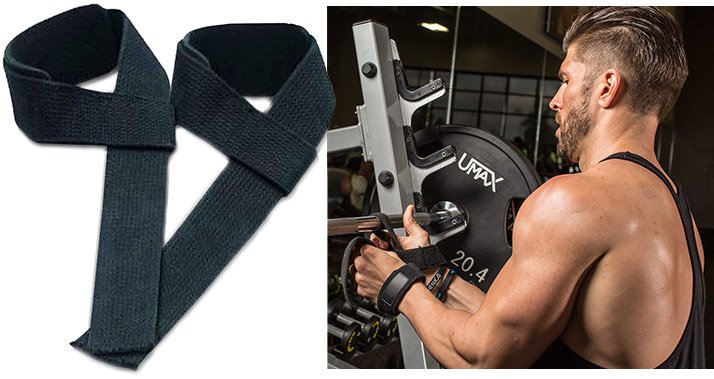 Note: In a pinch, you can also make an ad hoc version of a closed-loop strap using a loop strap. Just loosen your loop to the point where it is in your grip rather than on your wrist.

That last comment about the hook straps deserves a little more explanation—both the technique part and the part about what people think of you. Despite what I was saying about the right link/wrong link earlier, your grip does play an important role in the technique of a number of lifts. In deadlifts and Romanian deads, your hands help you set your lats and protect your back. In pull-ups, squeezing the bar hard helps you generate more strength throughout your arms and back.

Does this mean you should never use straps for these moves? Not necessarily. Instead, just keep these rules in mind:

As for the haters, don't sweat them. If you're doing quality work and getting stronger and more muscular, there's nothing to be ashamed of. Just tell them to get a grip!

Tony Bonvechio is a strength and conditioning coach at Cressey Sports Performance in Hudson, MA.