After being picked on as the skinny kid in school I decided to learn more about training and nutrition. I started being serious about training and managed to go from a scrawny 125 pounds up to 170 pounds bulked. See how I did it right here!

Throughout my life I've always been a skinny, non-athletic guy. In high school I was always considered a 'geek.' I was constantly picked on by the older students, and never taken seriously by girls; consequently, I suffered from low self esteem. 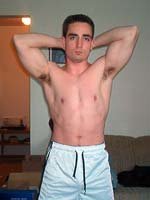 Click Image To Enlarge.
I Was Never Taken Very Seriously.

During college, and into the first few working years of my life, not a lot changed. I experimented with weights, but never had a lot of luck. Still weighing in at 125 pounds, my self esteem dropped to an all new low.

It wasn't until I woke up one day - shortly after my 23rd birthday, that I took a long, hard look in the mirror and realized that if things were ever going to be different for me, I really needed to commit everything I had inside of me to make the changes that were necessary. 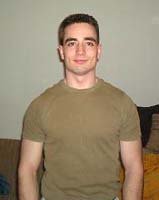 Click Image To Enlarge.
I Decided I Really Needed To Commit.

I had always enjoyed training with weights, but I knew next to nothing about a proper diet or nutrition. It also wasn't uncommon for me to miss a few weeks of workouts in a row because I was discouraged or because I "didn't have the time." Once I committed myself to changing my life, I adopted a few strict rules regarding my lifestyle. I promised myself that I had to make good on these for at least 6 months - absolutely no excuses. 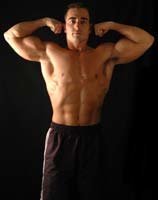 I followed through with these promises, and at the end of the 6 months I had gained about 15 pounds of muscle, weighing in at 140 pounds, and looking pretty good.

Rather than stopping there, I continued to read as much as I possibly could on Bodybuilding.com. I asked the resident forum experts as many questions as I could, and bought as many training/diet related books as my bookshelf could hold. Over the course of the next two and a half years, I gradually learned about the art of preparing and packing food in advance.

I started doing some intense new exercises I had never done before such as deadlifts and barbell shrugs. Over the course of 3 years I have managed to pack 45 pounds onto this 5-foot-6 frame, with little added body fat.

Click Image To Enlarge.
I Started Some Intense Exercises.