Up And At 'Em: Train Early And Reap The Rewards All Day!

Life is too short to start each day feeling miserable. Become a morning person, and make the most of the time before the world gets running.

It seems like every day one new hashtag, and a hundred sorta-new ones, are born on Twitter. But most of them are just shorter ways of whining, taking potshots at other people, or congratulations for being so clever. Show me one that has some value in the real world.

You probably can't. So I'll show you one.

#upearlytotrain is a hashtag I started almost two years ago, but it wasn't to pat myself on the back. It was to keep myself accountable, plain and simple. Like everyone, I need to be answerable to someone in order to progress toward the goal I'm constantly chasing. The first time I used it, it went out to about 20,000 people who were following me on Twitter. And as of publication, I'd be insulting 290,458 of my peers if I didn't stick to my word. That's just not my style.

That's why #upearlytotrain is so important to me. Right off the bat, my mindset is all about getting a jump on the world every single day. Stop me if you've heard this before, but life is short. There's only so much time available to you before you're gone. But if you can get up and train all-out at an ungodly hour, you're using more of your time rather than losing it. 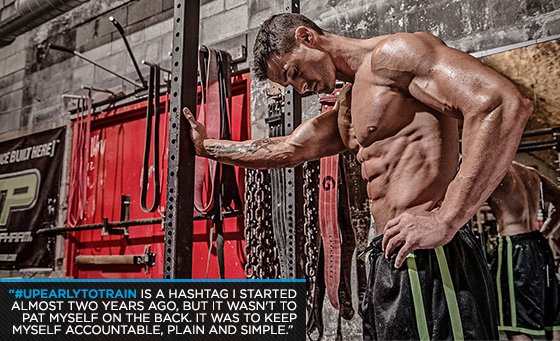 We harp on this repeatedly at Old School Gym, but it's as simple as getting up and making it to the bathroom. If you make it that far, it's on, as far as I'm concerned. If I have any doubts, I see myself in the mirror, and that feeling of accountability immediately kicks in: "If I don't go, I'm lazy. And I've worked too hard for that to be true."

So, yeah, the alarm goes off each day at 3:45 a.m. I admit that it took some getting used to, but my body is used to it now.

I know your next question: "If you're getting up at 3:45, what the hell time are you going to bed?" My reply to that question—and I get it a lot—is around 10:30 p.m. So yes, I only sleep 5-6 quality hours per night. It sounds crazy, and it just might be, but I believe as long as I get that much sleep, I'm ready to take on the world.

This doesn't mean that I don't think sleep is important. Believe me, the hours I get are very important to me. I just believe that it's more important to earn every bit of sleep I get than sleep as much as possible.

The late, great Jack LaLanne believed in this principle, and I'll gladly follow his lead. This was a guy who knew about taking advantage of every single minute he had available to him. Here's how he described it to NPR when he was 89: "I've only got one enemy: Jack LaLanne … I usually hit the gym around 5 or 6 in the morning. To leave a hot bath, leave a hot woman, [and] go into a cold gym takes a lot of discipline, boy, I'll tell ya ... I never liked to exercise, but I like results."

Jack Lalanne - Stop Being So Tired

Did you notice what wasn't on his list of things making you tired? "Not getting enough sleep." This principle is hard to explain until you get in the groove, but once you're there, there's no limit to what you can do.

Time to Train, Time to Improve ///

Obviously, an early morning workout is good for your body. It's also a natural stress reliever working out right after waking up. I love the confidence that comes from knowing my workout is already completed. It helps me walk with my chest out through the rest of the day, knowing that I've accomplished more before 9 a.m. than many people will do in an entire day. But let's touch on why it helps the mind, too.

Growing up I was never some academic animal or guru. I probably read one book during high school, and that was the Michigan basketball "Fab 5" book. But once I became a self-taught businessman and fitness professional, I had to find mentors in life—and through books. I'm certainly OK with that, though, because my non-traditional education has worked out well for me.

But that education didn't just happen. It continues to happen every day, right after I train. After you've completed your workout, set aside 15-30 minutes to work on personal development. This could be any of a number of things, but for me, it includes studying fitness or business, or reading biographies on someone I want to learn about. 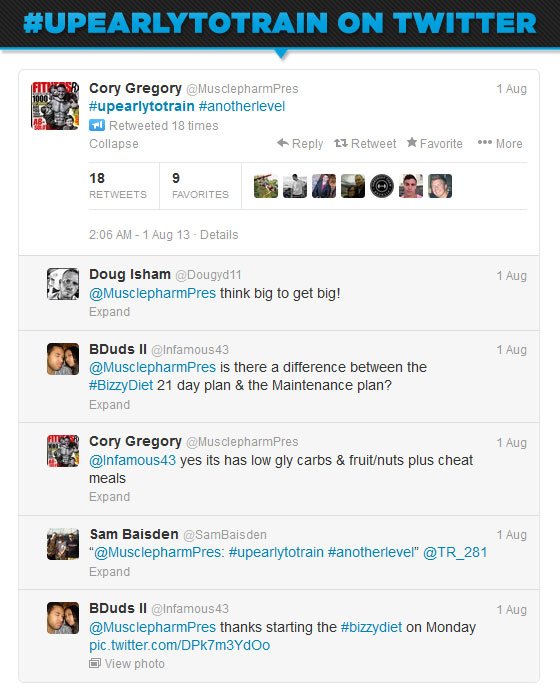 I've read hundreds of books since I started my own business in 2000 at 20 years old. It's simple: just have the desire, and have the books. I spend about $40 per quarter at the used bookstore, and I'm always amazed by what I find out there. You can even just pick up a library card and mow through some knowledge that way.

A half-hour may not sound like much time, but once #upearlytotrain stops becoming a goal and becomes a lifestyle, the time adds up. Think about it: Why stay the same when you can get better each day?

I'm totally sold on what the #upearlytotrain lifestyle can do, but it's not just because of what I've accomplished before the sun comes up. It's because I know that every day, I'm building the discipline that brings me closer to my goals, no matter how grand they may be. I am one of the most consistent people you will ever meet, and it's because I have dedicated myself to these habits.

It's going to take time for this to work. You'll hate it at first, and that feeling won't go away in just a day or two. But if you're consistent with it, you will be amazed how your life will change, and how productive you will become. Seriously: Anyone can do this.

You'll build your body, confidence, and also your mind. Do this for 21 days—which is how long it takes to create a sustainable habit—and let me know how your life has changed in the comments, or shoot me a tweet at @musclepharmpres. Until then, get #upearlytotrain.

Cory Gregory co-founded MusclePharm. As Executive Vice President of Business Development, Gregory works closely with all of the world-class athletes.