The Rock's Epic Journey To Hercules

Want the body of a Greek god? Forget about your precious cheat meals. It's time to roll up your sleeves, climb to the top rope, and go big with Dwayne Johnson and #TeamHercules.

When Dwayne "The Rock" Johnson decides to dive into a role, he doesn't half ass it. This is especially when that role is the ultimate hero—the demi-god who shed his mortal skin and ascended to Olympus, and inspired some of history's most famous sculptures along the way.

But when he took on the role of Hercules, Johnson didn't want to be a run-of-the-mill, baby-oil-slathered beefcake traipsing around in just another swords-and-sandals spectacle. Hell no, he didn't. "Once I committed to becoming Hercules, it was on," he told me. "I wanted to create a look and movie that hopefully, redefines the story of Hercules."

Of course, the gods weren't going to allow it to be easy. Six weeks before shooting started, Johnson tore two tendons off of his pelvis while battling with John Cena at WrestleMania 29. All of a sudden, he had a task ahead of him as formidable as Hercules' legendary 12 labors.

He could have backed out. He could have had surgery, seethed in a hospital bed for days, and tried to get shooting postponed. But instead, he just gritted his teeth, made a plan, and did the work to achieve it.

Are you ready to smash past your limits and join #teamhercules? Then follow Johnson's five-step game plan that took him from the doctor's office to the big screen. It won't be easy, but if you make it to the other side, you'll earn your place among the gods and inspire stories for years to come.

One of the hallmarks of Johnson's physique through the years has been the way he managed to stay both smooth and defined, like a marble sculpture come to life. Perfect for Hercules, right? Not for the one that Johnson and director Brett Ratner had in mind.

"The overall goal for the physique of Hercules was to come in with a grainy, dense, 'scarred and survived,' muscularity that can only come to a physique after decades of hard training," Johnson said. Once he'd determined the physique that he thought would best reflect the inner character, history, and journey of the legendary hero, he had to set about bringing it to life. 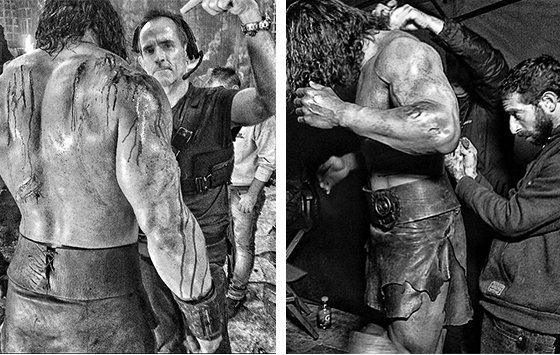 "The overall goal for the physique of Hercules was to come in with a grainy, dense, 'scarred and survived,' muscularity that can only come to a physique after decades of hard training."

Do it: What's your goal? No—your real goal. The big one. If you don't have one, how do you plan to reach it? Answer: you won't. Stop throwing darts into the ocean with unstructured workouts, sets, and reps that don't matter, and effort that keeps not adding up to anything. Generate a goal that is worthy of defining an entire period of your life. You want to be talking about this when you're old!

STEP 2 Figure out how to get there

Having spent his entire adult life as a performer, entertainer, athlete, and singular physical specimen, Johnson brought ample experience and knowledge to the task at hand. This gave him a clear idea of what was ahead of him. "In one sense, it's 'easier' due to the experience I've gained over the last 14 years of being an actor," he said. "The 50,000-foot strategy becomes clearer for me because of my experience."

But even he knew that big vision wasn't enough turn strategy into success. "To achieve it, I put together a phenomenal team of top notch coaches (captains of #teamhercules) my diet coach, George Farah and my strength and conditioning coach, Dave Rienzi," Johnson says. Once Johnson and his team had the road map that would transform him into the ideal physique he'd envisioned for the role, the process of transformation really began.

Do it: If you had to drive somewhere a long distance from your home, what would happen if you got in the car and just started driving? You might get there—if you were lucky. But you'd get there faster with directions. Take time to map it out at a high level—from 50,000 feet, as Johnson describes it—and use all your tools—your coach or trainer, or the plan of the athlete who inspires you—to fill in every turn along the way.

To get the results he needed, Johnson knew it would take more than his normal gym time and watching his diet. "We started prepping roughly six months out from shooting and continued the all-out assault for an additional five months while actually shooting," he explained. But even that would only be enough if he didn't also make it hard.

Check out the workouts @therock used to get ready to lead #teamhercules: Shoulders, Arms, Chest, and Back!

Luckily, Johnson's internal throttle doesn't know what easy is. "One of the greatest lessons I learned playing for the University of Miami the year we won the national championship was to always outwork your competition," he said. "I also learned how to slam tequila like a man, but that's for another time."

Do it: Dwayne Johnson makes looking like a complete and total specimen appear to be easy, because he's an actor, performer, and entertainer. But it takes his complete and total dedication to achieve his monstrous results. If you want to get results, there's no getting around doing hard work. How hard is hard enough? A little bit harder than you think is possible. Push yourself every time you set foot in the gym or pick up a weight. Go to a mentally and physically uncomfortable place in your training. That's where you'll find out who you are and unlock the biggest results you've ever gotten. 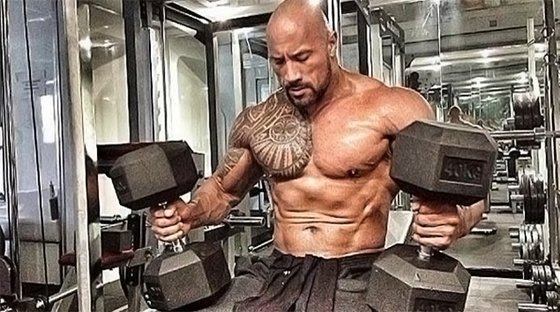 "Push yourself every time you set foot in the gym or pick up a weight."

After his injury at WrestleMania 29, Johnson and his doctors elected to skip surgery. Instead, as he tweeted at the time, "Rehab starts in 3...2... #bringit." Sounds aggressive, right? Well, Johnson discovered just how aggressive the plan was the next time he stepped into the gym to perform one of his "daily fun pain" routines of heavy lifting, functional training, and stunt work. His original tweet needed an update.

My dr's said that starting back training w/ torn abdominals would be a bitch. Just found out they were right;). We gotta push thru..

This was where this legendary athlete's true labors began. "I trained and dieted for months and months like an animal for the role, cause at the end of the day, I always knew we had just one crack at getting this right" he told me. "I'll push myself to always be the hardest worker in the room. Always."

Do it: Johnson went beyond all labels and modalities to accomplish his incredible goal. No label—bodybuilding, functional, athletic—can really capture the breadth of the work he did to become Hercules and surmount his injuries. To get the results you want, you must open your mind and be willing to try anything. And you must not expect it to be easy. 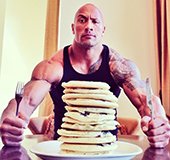 See What The Rock's Been Cookin'

You've likely seen photos of Johnson with his #legendarycheatday. But don't let that day's treat list—a dozen chocolate chip pancakes, four double-dough pizzas, and 21 brownies—make you overlook what he ate for the 150 previous days. In case you needed a reminder, Johnson was more than willing to tweet it out. In fact, he shared his workouts and "12 labors diet" freely online.

Were there times Johnson wanted to take a break or to tear through a pile of warm, fluffy chocolate chip pancakes? Of course. The difference between an aspiring god and a mere human is the ability to ignore those urges and just keep going forward toward a goal, no matter what other impulses you might feel.

Do it: When it's time to train, fully dedicate yourself to the task in front of you, and give every ounce of your being to doing it to the best of your ability. When you're outside of the gym, take your recovery and your diet just as seriously. There will always be temptation. But when you're ferociously focused your goal, nothing can stop you. Not even an extra-large pepperoni pizza—or four. 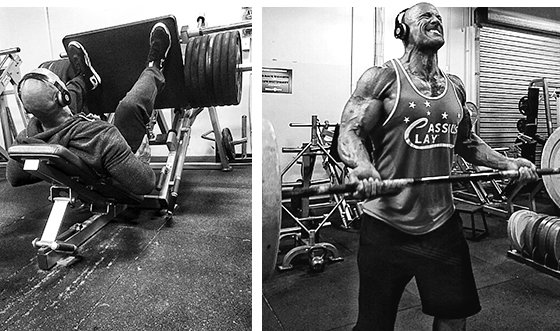 "When you've made the decision to strip away excuses and start building your own version of Hercules, you'll need to reset your expectations of what is possible."

Are you ready to build your legend?

When you've made the decision to strip away excuses and start building your own version of Hercules, you'll need to reset your expectations of what is possible. Epic results take epic effort. But as Johnson showed—and shared freely at every step along way—it can be done.

Just keep in mind Johnson's parting advice and you'll get there. "Be prepared to work harder than you ever have before in your life."

Fight Like A Beast: Joseph Valtellini's Workout And Fitness Tips

Professional Muay Thai kickboxer Joseph Valtellini will kick your body into fighting shape before you can scream ''KO.''

To play the son of Zeus in the upcoming blockbuster ''Hercules,'' Dwayne ''The Rock'' Johnson took his training to an entirely new level. In this interview, the movie icon reveals how you can build the body of a demigod.