How do the toughest athletes in the gym summon the strength to hit their goals rep after rep, set after set, and year after year? How do they consistently add weight to the bar, train harder, and perform better? Brute force and sheer willpower can do wonders for a single workout, but elite trainees have to maintain a high level of mental intensity for the long haul. They have to find ways to take that inner voice that screams "one more rep" and let it ring in and out of the weight room.

Take the members of Twinlab's Fuel Team Militia. Their goals and backgrounds run the gamut, from former college football player and powerlifter Jason Wheat, to competitive bodybuilder Ronnie Milo, to Twinlab executive Chris Thompson, who aims to stay lean and ripped at age 45 amid a hectic travel and work schedule. But these diverse brothers in iron share a vision of what works best in the gym, and they hold each other accountable to it.

Here's how they manage to keep upping the ante over the long term, and how you can, too.

"I want to be proportionate, work on my weak spots, and make sure I give 100 percent in the gym."

"My goal is to compete in powerlifting again."

Jason Wheat spent two years working as a contract firefighter in Iraq, where he buddied up with Army Rangers, Delta Force operators, and other service members on the base where he was stationed. Surrounded by these strong allies, his competitive side came to life as Wheat smashed one insane workout after another.

Soon enough, Wheat started thinking bigger. He began working specifically to realize his long-held goal of becoming a competitive powerlifter. Along the way, he cut down from 295 pounds to a ripped 245, finding the type of athleticism he hadn't experienced since his college football days. When the opportunity to compete finally arose, he was so determined to make it happen, Wheat flew 25 hours straight from Iraq to Honolulu, Hawaii for a powerlifting meet. 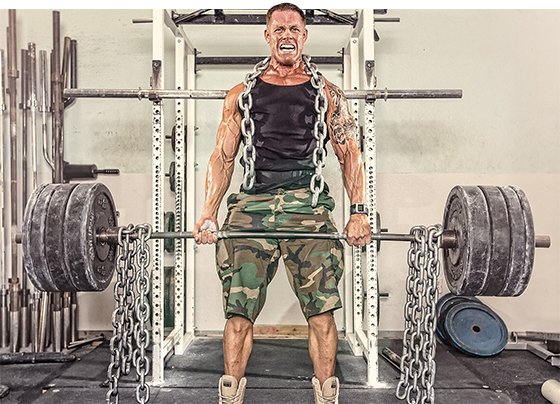 Jason's competitive side came to life as he smashed his insane workouts.

Does this mean you have to set your eyes on an international competition in order to get results? Of course not. You just have to be as serious as if a title were on the line. You can battle against your buddies, your heroes, adversaries in your head, or just against yourself. Chris Thompson does this every day in his current training program, which requires that he push himself to failure on every movement, every day. "It feels like a tug-of-war with myself," he says. "Like a fight for my life."

"I have a rule: Leave it at the Door," says Ronnie Milo. Every day when he walks into the gym, Milo sheds every distraction so he can focus on becoming the best bodybuilder he can be. This has been crucial for his success, he says, but he admits it isn't always as easy as it sounds. That's why he engages in a precise pre-training ritual to get his mind into the weight room, which includes dropping the day, taking a pre-workout supplement, and visualizing the battle ahead. 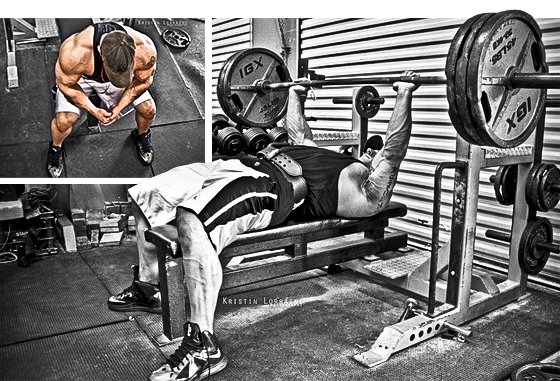 Thompson says the same approach works for him. "When I take my pre-workout, it gets me fired up, focused, and intensified. It puts me in the right mood and frame of mind to be ready to work out," the busy executive says, "but it's also important simply because it's a ritual. It's the signal that helps me shift my mindset to the place I need to be in to give my workout everything I have."

Don't expect a pre-workout to create all your intensity and motivation for you. That's still your job. But as part of an established ceremony, one can help you place a bull's-eye on the task at hand and attack it relentlessly.

Social media isn't all pictures of babies and cats. It's also a free, interactive hall of fame where you can have unparalleled access to the athletes you admire most. Use it! Put your overpriced data plan to work by integrating some world-class inspiration into your pre-workout ritual.

"Instagram is a great way to get inspired before you train," Jason Wheat says. "I like to look at photos of people I look up to, who have physiques I admire, and who have achieved things that I want to achieve. I do it almost every time before I train, and it helps me focus. I follow Phil Heath, Dana Linn Bailey, Kai Greene and Jay Cutler. Cutler posts photos of his food, what he's doing day-to-day, training pictures, and posing pictures."

Follow your heroes on social media, if they're there. If they aren't, find an inspiring fitness community and discover a new set of up-and-coming fitness role models. Look at their photos, read about their routines, and visualize yourself achieving the results you want when you hit the gym.

4
Train with Other People

Sometimes your schedule or your goals mean you have to train alone. Milo, for example, usually has to lock it down and go solo to fit his very specific, strict bodybuilding routine into his workday. But all three athletes featured here believe that when your workout program and timing afford you the opportunity, you should train with a partner or around other people.

"You can feed off a training partner's intensity, and if you're feeling bad, he can change your mindset around completely. It gives you someone to push you and someone for you to push," says Wheat. The members of the Militia have been known to take this technique to the next level by staging entire gym takeovers at weight rooms around the country. When you look at every barbell in the room and see it being crushed by a friend you admire, you'll know the power of training as a team.

If a takeover isn't for you, the people in the facility where you train can be an incredible source of inspiration, too. "There's a guy in a wheelchair who trains in the LA Fitness where I train when I'm at home," Chris Thompson says. "I see how hard he works and say to myself, 'He's not quitting. Are you going to?'"

5
Turn Up The Music 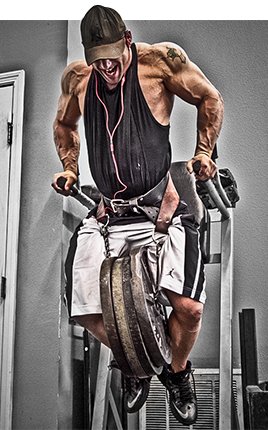 The music you choose is as personal as your goals and program.

By now, you've probably seen two guys working out together who are both wearing headphones and totally ignoring each other. If you're training with a partner, don't be one of those guys. "With a lifting partner, I never wear headphones," insists Wheat. "I want us to be there for each other."

Nevertheless, the firefighter grants that, just like there's a time when a partner can provide the perfect boost, there's a time when the only way to power through a brutal routine is to grind it out solo. For those times, he puts on a face and a pair of headphones roughly equivalent to a "Do not disturb" sign. "If I'm training alone, I have my headphones on and I'm not big into talking to anybody," he says.

For Milo, music is just another crucial piece of equipment, like a belt or straps. "If you look at horse racing, the horses wear blinders. That's what my headphones do—they're my blinders," Milo says. "Music drowns out distractions and noises like people screaming or dropping weights. It takes me into my realm."

For Thompson, music helps him get centered and find the right headspace, but blaring beats and guitars are optional. "Music is key, but it can vary by my mood," he says. "Sometimes it's Metallica, but sometimes it's the classical cellist Yo-Yo Ma."

The music you choose is as personal as your goals and program. But just like the other fundamentals above, you should have it nailed down before you set foot in the gym. Leave your intensity up to chance, and you're leaving your results up to chance. Take a cue from the Militia: Get your mind right before you train your body.