To become an action hero, you need to train like one. See how celebrity trainer Gunnar Peterson preps the Expendables!

The pull-up is a basic, bodyweight exercise. It's something for when people are on the set or traveling and can't find a gym. Use something like this to get you over the non-exercise hump.

One of the exercises we use for The Expendables is not just a basic pull-up, but a lateral movement. The muscles engage differently; you're not just using your dominant side. It forces you to be a more balanced athlete, which is what everyone wants. The more balance you have, the less likely you are to get injured.

After the lateral move, go straight into a basic pull-up. You can go to an underhand grip, an uneven grip, then to a parallel grip. The more you mix it up, the muscles engage differently, react differently and have to fire differently, which means they have to adapt and develop. 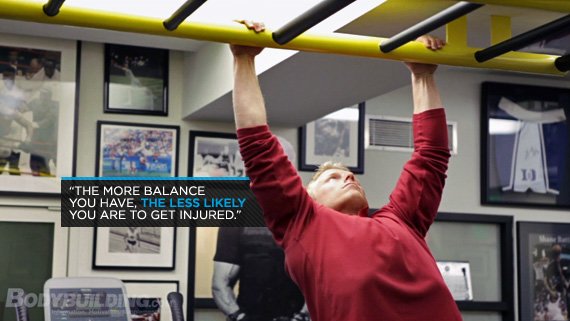 The Thorotread combines a basic treadmill with resistance. To get more recruitment from the core muscles while walking, push the moving chassis. This works core musculature, obviously by holding the torso upright. The chest, front shoulders and triceps are also engaged in this basic press. 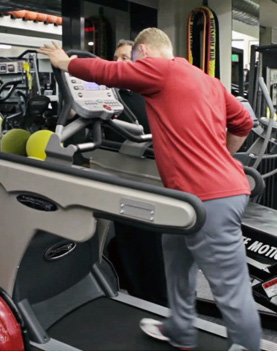 If you don't have a Thorotread, you can replicate this movement by switching to a 1-arm shoulder press while walking, firing the obliques, intercostals, serratus and all the muscles down your side.

I would put anyone on the Thorotread. I'd put an athlete on it, especially an athlete who uses a repetitive throwing motion: a quarterback, tennis player, boxer or an action hero, because they use a lot of movements, a lot of punching and a lot of shoulder work. You want local muscular endurance; this is one way to get it.

Go right from that to a standing move, a pull, so the resistance occurs on the way back. Core muscles engage and you get more bang for your buck than just a basic treadmill workout.

For this move, I use a vintage dumbbell from artofstrength.com. It has a fatter handle and I filled it with shot, so the muscles fire differently to keep it stable. This replicates what we do as upright beings. The movement is a half squat with a push press and a twist. The lower body and core are involved; metabolically, you bur calories like a hummingbird. I love it!

You don't have to the exercise with a specific dumbbell. You can do it with a solid dumbbell, a carton of milk, whatever you have available. Don't let the lack of equipment stop you from doing this. Be creative and make it work.

You want to think about something that will give you 6, 8, 10, 12, even up to 15 reps, depending on where you sequence this move in your programming. It's going to be different for everybody and it depends on your goals, whether you're looking to get big, fast or strong.

You ask your core to engage, because your body wants to tip one way and you force it to move the other way. They adapt, and if they are adapting, they are changing. 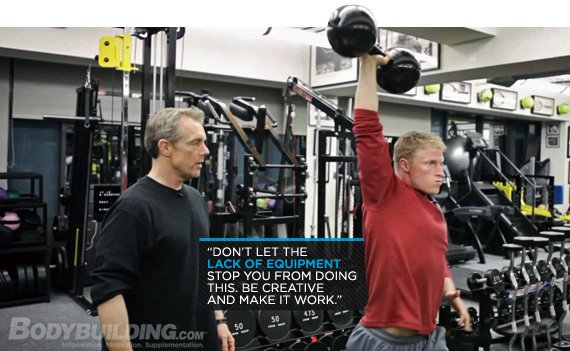 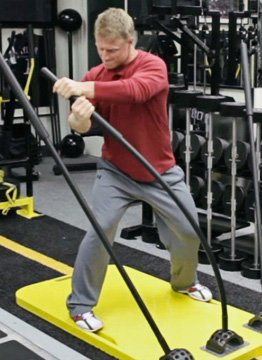 Shock the body, wake the muscles up, force them to adapt.

We sometimes need to introduce new movements to achieve dramatic results. Don't forget, some of these guys, like Sly Stallone, have been lifting forever. I think Sly was a member when Leviticus had a gym.

Like Leviticus, your gym probably won't have Core Stix. You can achieve similar movements with cables.

Oblique rotation: Come down deep, nice and low to the hip, then turn and pivot so everything fires through the core. Switch hands and go to the other side.

This is a functional and athletic move. Most importantly, this is an action hero move!

This is a chopping move on a pneumatic piece. It can give more or less resistance. It's useful for action anything, but also in sports.

Think about throwing, rotating, pushing, pulling, anything that works rotational or transverse plane is going to be useful for application in real life or in movies. Chop away! You can also do negative reps on this terrific tool. 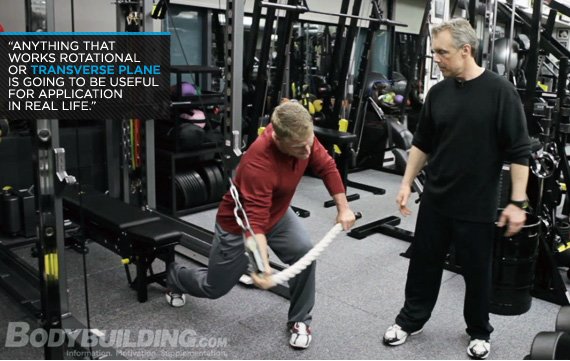 This machine provides a great way to do squats if you don't want to squat with a heavy load. The squat is the king of all exercises, but some people can't do it. Some people can't even put their hands back in the position to hold the bar.

Sly has had more surgeries than he's had leading roles. He's had his shoulder rebuilt and redone a number of times, leading up to this film even. You can still get the work on the quads, the glutes and the hips without loading, by varying the intensity of the floor drop. The Quadmill allows us to achieve that effect.

Squat without moving! Keep the grip light. See the floor drop out beneath you. After 15-to-18 seconds, you'll feel the quads light up. Around the 30-second mark, sparks will shoot off you! Stagger your stance so you can create an uneven load, firing more core muscles.

The Quadmill provides a great way to work the lower body without having to load the upper body. Of course, if you don't have a Quadmill, quick bodyweight squats with correct form will help you achieve a similar training effect. 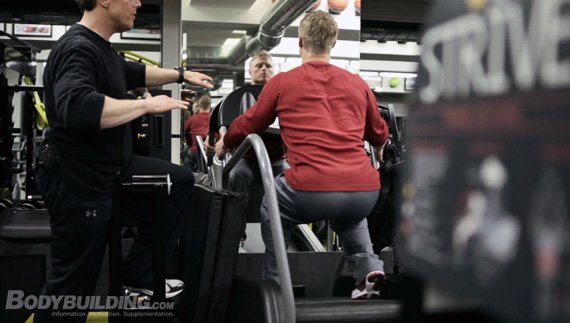 I change up all the exercises every time with every person. It keeps your body guessing and the mind engaged. This is not just for the Expendables 2 guys. Find a way to utilize some of these moves in your own workout. Even if you are just starting out, there is definitely something here that you can take, assimilate and put into your workout to keep it fun and keep you going back. That's the best way to get the results that these guys have.