When aerobics no longer did the trick, Samantha turned to lifting with a coworker. In less than a year, she had lost 40 pounds and embarked on a fitness adventure she never could have predicted! 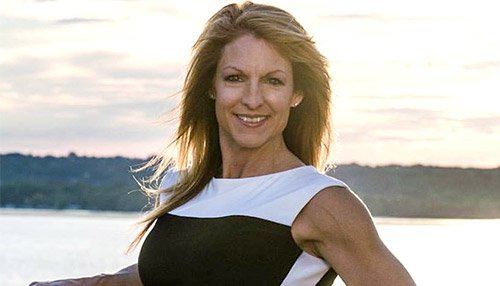 It wasn't the jeans alone that led Samantha to rethink her routine, but they definitely helped. Her suddenly snug-fitting pair of size 12s tipped her off that her weekly aerobics classes might not be cutting it, and helped her realize all the other compensations she was having to make.

"Going up a few numbers on the scale meant a lifestyle shift," Samantha recalls. "No more shopping at the fashionable stores. No more pulling off a two-piece bathing suit. Goodbye fashion, hello hiding fat."

Of course, this didn't happen overnight. Rather, she experienced that incredibly common, slow-and-steady uptick that snuck up on her until she was at her heaviest in her mid-40s. "I did step aerobics and pole fitness 2-3 times a week, but doing what I'd done before to keep the weight off wasn't helping anymore," she says. "On average, I gained two pounds a year, despite being active."

Many people would see this change as the writing on the wall. They would accept that they and their body had permanently "changed." But Samantha took a stand. A chance encounter with a fit coworker set her on the lifting path, and she hasn't looked back since.

You mentioned that you were always active, but that the weight became a struggle in your mid 30s and 40s. What changed?

My size 12s were a getting tight in spite of the exercise I had always done to "maintain my figure." What once worked was no longer enough! And Ann Taylor doesn't have a size 14, you know? 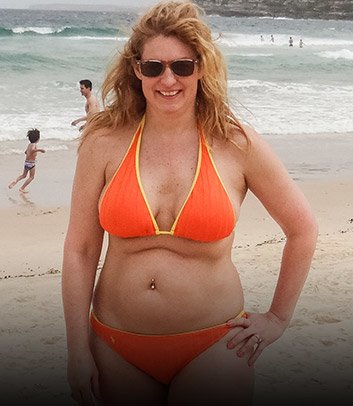 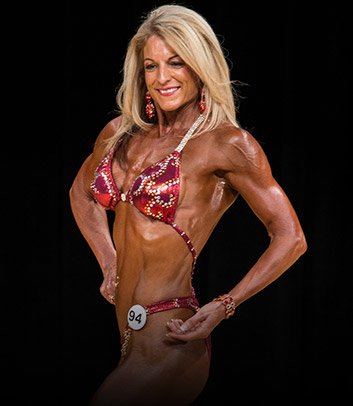 My confidence was low, and I wasn't happy with my progress—or lack thereof. At the beach every year, I'd always wear a two-piece, but now I was cropping every picture from the waist up. I began to realize that, while the classes were fun, I needed to do more. I just didn't know what, how much, or how often would be effective.

What steps did you take to revamp your idea of fitness?

First, I rejoined Gold's Gym. Unfortunately, my go-to aerobics was only offered once a week, and I was skeptical of yoga, which I saw as more of a stretching cooldown. I didn't fully trust that the machines at the gym would be enough to get my heart rate up and burn fat.

I considered investing in personal training, but I was hesitant to invest so much time and money into something I didn't think would be sustainable. I kept thinking, "Would I learn to do this on my own? Would I have access to big tires for flipping without a trainer being there?" 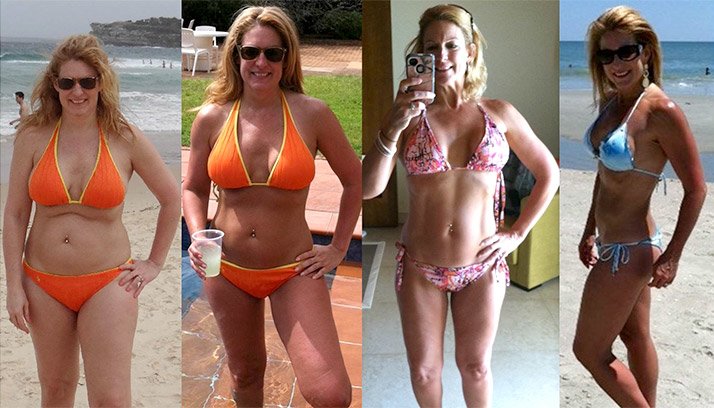 What ended up working was a bit of a fluke. When I said something to my coworkers about my fitness struggles, one of them offered to train me, and I accepted the offer. For the next five months, if he said to go to the gym, I was in the gym. I was able to train with him 5-6 days a week.

When we first started working out, he offered to let me choose my own program, but I didn't know enough about what I wanted to do or what kind of exercise I enjoyed. I knew nothing. So I just said I was willing to work out and do what he did, which was the Arnold Blueprint trainer. 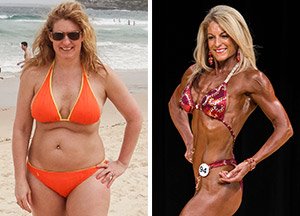 Don’t Wait to Become Your Best Self
Today is the perfect day to transform. Find the right plan for your fitness goals, absolutely free! Start Today!

That's a tough one to jump into! How was the experience?

It was a hard workout, and a long workout, but it was a great experience. We took turns, so it always took us close to two hours to do our workout. That may sound like an eternity, but the thing I liked is that neither my coach, James, nor Arnold's Blueprint treated me like a middle-age housewife. That links to my belief in education, and that you can't teach to the lowest common denominator.

It was your first time lifting in a while. Did your coworker cue you in on form?

Yes! I remember one of the things that really kicked me in the butt was that, when benching, I had a bad habit of wanting to pull my head back to see where I was racking the weight. James broke me of that, fast. With form—whether it was keeping my back straight, my head back, my eyes focused, or my feet anchored—he was just great.

Did he help you revamp your diet?

Adding some protein was the biggest thing, although I'd occasionally binge on a bag of chips as well. Still, I'd say I tended to eat on the healthier side of things—even before. When my husband and I went out to eat, I'd order a grilled chicken sandwich, skip the fries, and only eat half of the bun. I took a lot of half-measures, but they weren't effective.

When I met with James and sat through his nutrition lecture, things became a lot more stringent: no bread, no white carbs, no pasta, sugar, or doughnuts. No fried foods, juice, soda, cheese, and—the punchline—no excessive fruit. It was strict, but I rode it out because I wanted to see where it would take me.

How did your physique change after you developed these new habits?

We worked out consistently in the evenings after work, and I got a lot of encouragement and tips on how to lift heavy. Between that, about 45 minutes on the elliptical each day before breakfast, and my new nutrition regimen, the fat began falling off. I was losing about a clothing size each month and lost 20 pounds in the first three months.

By September, I had veins popping in my shoulders and weighed 144 pounds, a whopping 30 pounds lighter than when I'd started. My body fat went from 34 to 17 percent in seven months!

That's when I had a big shift in my self-image. Not only had I lost some weight and blown away my original goal, but I was wearing clothing sizes smaller than the decades-old sizes 8 and 10 in my closet. I had to go out and buy a size 4—a size I'd never been before.

When you went back to training solo, was it a big challenge after training with a partner?

Yes and no. Sometimes I miss having somebody to motivate me and fuss at me and keep me from getting sidetracked and taking selfies, but working out on my own is also empowering.

The thing I like about working out by myself now is that I have the knowledge to get my workout done whenever I need. I usually train in the mornings, but if something happens and my schedule gets rearranged or I oversleep, I can work around it.

I don't have to worry that I'm running late because a trainer is looking for me or that I have to be there at a certain time for an aerobics class to start. I love the flexibility.

How did your fitness journey continue to progress?

I followed Jamie Eason's LiveFit all the way up to six weeks out from my first figure competition. That's right, I competed! I hired a coach for the home stretch and ended up placing second in the novice division and fourth in the open division. Preparing for that got me down to 132 pounds and 12 percent body fat—all in less than 10 months from the day I started. 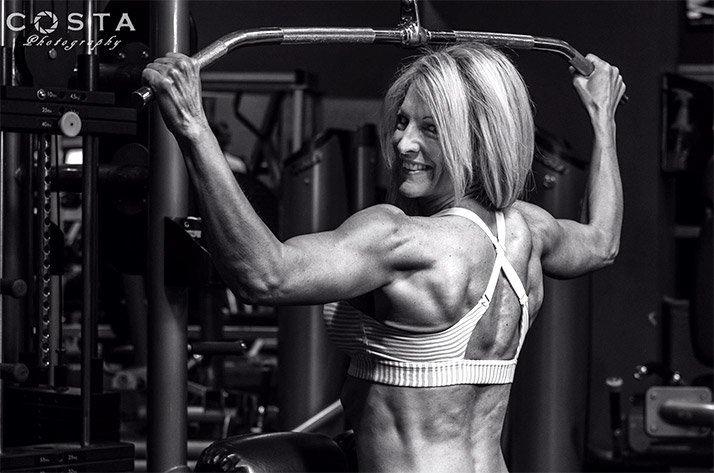 That may sound like an eternity, but the thing I liked is that neither my coach, James, nor Arnold's Blueprint treated me like a middle-age housewife.

At the November 2014 NPC Max Muscle MidAtlantic Open and Armed Forces Show and the VA/DC State Show, I came in second place in novice figure and fourth in open. On April 25 of this year I competed in the NPC Max Muscle Classic and placed second in both 35-and-up and 45-and-up divisions. In August, I competed in Maryland at the NPC Sean Ray Classic, where I placed third in open class C and second in the 35-and-up masters division.

In North Carolina, at the Quincy Roberts' NPC Muscle Heat, I placed first in the 45-and-up masters division and first in the Class B Junior division, which is for new competitors who have never previously won a show.

Today, my goal is to continue to compete. I want to go pro in the figure division by the time I'm 50.

What was the hardest part of your journey?

My biggest hurdle was getting up early and getting to bed earlier. I was never previously a morning person, and would sleep until 8-10 a.m. on weekends. Now my alarm goes off at 5 a.m. on weekdays, maybe 7 a.m. on weekends. Eating right and going to the gym when you'd rather not is hard, but I've found that my body can't afford to eat and be lazy to the extent that my mind wants it to!

What suggestions do you have for aspiring transformers?

You don't have to be a former athlete or in awesome shape to start on your fitness journey. I never previously played sports and still don't do burpees, run, or do jumping jacks. Fitness isn't one-size-fits-all. With enough knowledge, you or your trainer can create a plan that fits your needs and is effective. Commitment and effort are all you need to start. 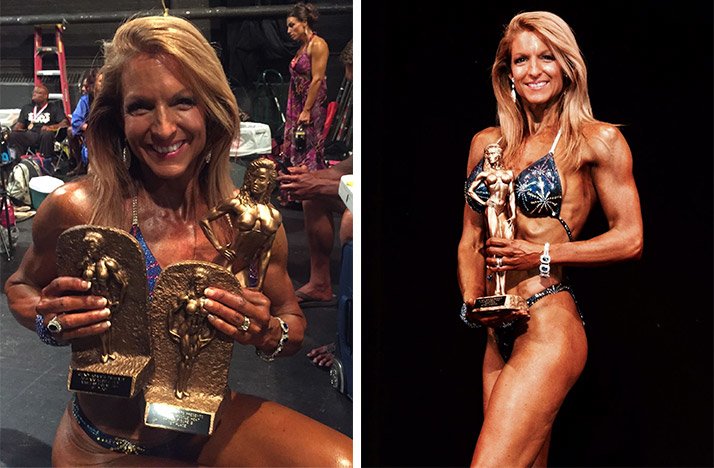 You don't have to be a former athlete or in awesome shape to start on your fitness journey.

Also, cooking helps! Learn simple recipes that make meal prep easy. Baking thin-sliced fresh chicken breast cutlets takes 30 minutes or less. Season your food and add a side of veggies or salad. Sure, it takes some discipline, but once your diet and exercise plans are in place, and you're seeing improvements you can control, you can allow for the occasional cheat meal. It's all about balance.

How did Bodybuilding.com and your support network help you reach your goals?

Bodybuilding.com has been 100 percent involved in my transformation from the start. Of course, both Arnold's Blueprint and LiveFit were there to guide me. But aside from that, I began my journey by logging in to the website, and setting that first goal—even though I scoffed at it at the time! Bodybuilding.com has also been the source for all of my supplementation needs.

Aside from all of the help from Bodybuilding.com, I had a lot of support along the way from my family. I appreciate their patience and willingness to tolerate fewer baked goods from Mom! My first trainer, James Dawson, was willing to take the time to teach me how to get the most out of my workout.

Then, there were the Gold's Gym members, trainers, and posing coaches, including Quinton Mackins and Tony Roberts; Your First Figure Competition, Costa Photography for the fabulous show and fitness photo shoots, Max Muscle promoters who ran a great show, and Tanning Tailz Liquid Sun tanning.

Finally, Bodybuilding.com, Precision Nutrition, and Action certified personal training for providing me with the tools to help others along the way.