Tanji Johnson Has One Vacancy On Her Resume: Ms.Fitness Olympia

Tanji Johnson is primed to unseat 5-time Fitness Olympia champion Adela Garcia, but ripping a champion off the throne is never easy.

Tanji Johnson launched her pro fitness career in 2002 with a sixth place finish at the Arnold Schwarzenegger Classic. It only took only more outing (fourth at the New York Pro) before the top-tier talent snagged her first big win, at the 2002 Toronto Fitness Classic. In 2011, 31 contests and 5 additional pro wins later she is a legitimate favorite to take home the biggest women's fitness title of them all: Ms. Fitness Olympia.

Johnson played second fiddle at both the '09 and '10 Olympia contests, twice finishing as runner-up to 5-time Fitness Olympia champion Adela Garcia. Tanji has proved she has what it takes to fight for top honors. This humble, "grounded-but- confident" champ is known for her professionalism both on and off the stage. She says her strong Christian faith sustains her through the requisite arduous training process to defeat the world's best.

Her persistence and well-established work ethic have paved the way for the great success she has, of late, experienced. The former U.S. Army brat (Germany, Korea), track and field athlete, hip hop dance performer and member of the U.S. Air Force Academy spent her life in physically-actice roles. At the USAAF Academy in Colorado Springs, Johnson engaged in several intensive military training programs, testing determination and stamina.

When she left the Air Force, Tanji figured Fitness competition was one way she could further express and challenge her physical side. It would improve her heath and she could help change society's concept of what real women could or should be like. Based upon her recent performances and the look she has presented, her concept of a "real woman" is a good one indeed.

A "real woman" doesn't back down, she faces adversity with grace and guts.

With the 2011 Fitness Olympia less than three weeks away, this real woman is again gearing up for another shot at elite-level success. Johnson narrowly missed the ultimate victory by a close decision in 2010. She returns armed with the confidence and, more importantly, genetic ability needed to take the biggest title in the whole fit world.

One thing is certain: come September 16 Adela Garcia will have a massive fight on her hands if she wishes to retain her sixth consecutive title. In the following interview Tanji outlines her 2011 contest prep and discusses how she stays inspired to compete among the Fitness category's best.

Q: What improvements have you made to your physique since placing second in the Fitness Olympia category in 2010?

I've added size and depth to my shoulders and back.

Q: What do you think it is about your look that gained you the runner-up spot at the 2010 Olympia?

I think I have great symmetry due to my broad shoulders and small waist. My quads are also a highlight of my physique.

Q: What kind of physique are you hoping to present onstage at the 2011 Olympia?

I would like to present my most conditioned package to date.

Q: In placing second at the 2010 Fitness Olympia your showed great conditioning and overall shape. How do you make improvements from year to year?

Some of this is due to good genetics. The rest is through continued back and shoulder training while keeping my legs conditioned through running and plyometrics.

I do a lot of cardio pre-contest. It ranges from one hour daily to 2-3 hours daily as I get closer to my contest; then I taper off and let my body rest two days before the show.

Q: What do you like most about pro Fitness competition? What keeps you motivated to compete year after year?

I enjoy the opportunity I get to better myself each season. With each triumph comes renewed confidence and strength.

Q: How would you describe your current approach to training?

It is very balanced. Weight training is done three times a week with my routine and gymnastics practice twice a week; as well as daily cardio ranging from steady state to HIIT [High Intensity Interval Training].

Q: How would you describe your training mindset?

I always train hard regardless of what I'm doing.

Q: How would you describe yourself as a competitor?

Q: Have you made any changes to your training over the past year? If so, what have these been and how have they helped you to improve your physique?

I've brought back heavy lifting to bring up some body parts. My physique will look more balanced and even harder [compared to that presented at the 2010 Olympia]. 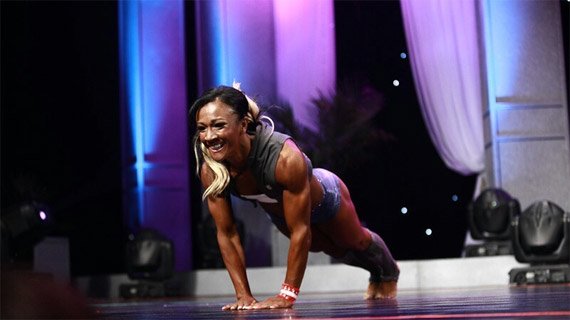 Second place can torment competitors, but Johnson refuses to quit until the Olympia is hers.

Q: Could you describe your current nutritional approach?

My diet is on a carb-cycle rotation with high protein and moderate fats. It's balanced and I don't feel depleted until the final weeks before a show.

I always take glutamine and BCAAs and usually a whey protein shake right after a weight training session. On my higher carb days I will take in 4oz of low-glycemic carbs post workout. Eight to nine hours of sleep are also crucial to my recovery process.

I think they are especially important for athletes who push their bodies and want to maximize their results as they sustain superior nutrition and training regiments.

I've discussed my recovery supplements, but I also take a good fat burner eight weeks prior to a show to speed up the fat-burning process. I started with Gaspari's Spirodex and then cycled onto Muscle Pharm's Shred Matrix. It helps to curb my appetite so that my small meals sustain me until the next meal.

Pre-workout I take Gaspari's SuperPump MAX. I love the new green apple flavor and it fuels me with the strength I need to get gains in the gym. At night, I take Nutrition Bounty's 5 HTP, GABA and CLA to help with recovery, stress and a good night's sleep.

Q: This year's Fitness Olympia will host the usual top-line competitors, you included. Who do you see as being major competition for you and why?

Of course Adela [Garcia], she is the reigning 5-time champ and always brings a well-conditioned physique. Oksana [Grishina] has a beautiful dialed in physique with routines that I especially admire and respect for her creativity and uniqueness. Every year comes with its surprises so I also anticipate greatness from all the competitors. 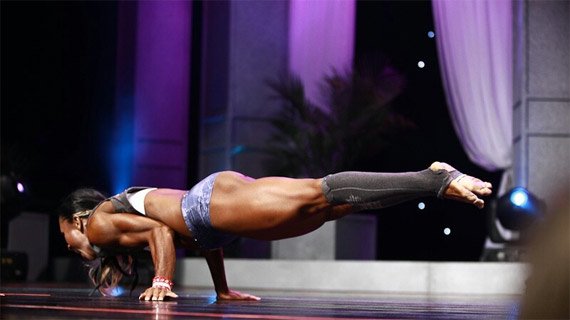 Her faith sustains her, but effort in the gym gave her this heavenly body.

Q: With six professional Fitness titles to your name, you have achieved more than most Fitness competitors ever will. What is your ultimate fitness goal and when do you expect you will achieve this?

I intend to win the Fitness Olympia and will continue to pursue this goal until I win it. I hope that will be this year.

Q: What are your major strengths as an IFBB pro competitor?

I am balanced with a strong physique and strong routine, but most of all I am persistent and never give up.

Q: What message would you like to give to your fans, those that will be coming to watch you competing at the 2011 Olympia?

It is my faith which sustains me.