My Journey Back To The Stage—Postpartum!

The journey back was much harder than I could have ever imagined. I was prepared for the physical agony, but the emotional side... Read on to see how I made it back.

It took all of 1 year, 10 months and 10 days for me to return to the competitive stage. Although I had planned to return sooner, my priorities of being a mother first and a competitor second held me out longer than anticipated.

The journey back was much harder than I could have ever imagined. I was prepared for the physical agony of getting my body back into shape, but the emotional aspect was a whole other ballgame.

My beautiful baby girl was born by an unexpected Cesarean section. I coached the OB the entire way through the surgery. I told him before the surgery that I needed the incision to be as low as possible so I could get back into my bikini, and then when he was stitching me up, I asked him to make my stitches pretty.

What Is A Cesarean Section? A caesarean section, or C-section, is a form of childbirth in which a surgical incision is made through a mother's abdomen (laparotomy) and uterus (hysterotomy) to deliver one or more babies. It is usually performed when a vaginal delivery would lead to medical complications.

I bet he was glad when that surgery was over!! Although every time I've seen him since the surgery, he asks me how the scar looks and if I'm happy about it. I think he's proud of a job well done!!

Six weeks post surgery, I was cleared to start walking and at eight weeks Postpartum, I was given the green light to begin a normal exercise regimen. Although I tried to keep my diet clean and low carb, my pregnancy hormones only allowed for a minimal of cleanliness.

The first six months I spent nursing my newborn and although I wouldn't change a thing about giving my baby the best start possible, I had to make sacrifices in getting back to pre-pregnancy weight that I didn't anticipate.

First of all, my body would not allow me to consume a low-carbohydrate diet and still produce enough milk for my growing baby. Each time I tried to cut back on carbohydrates my milk supply for the day decreased drastically, sometimes even to the point that I didn't have enough milk for some feedings and would have to supplement with formula, which didn't go over very well!

I tried to keep to a clean diet and just eat whole wheat products, but my cravings got the best of me. I mostly craved hamburgers and pizza and anything that had anything to do with simple carbs. Come to find out I was still anemic from my pregnancy and from nursing, so once I got more iron pills, I felt much more energetic and the cravings weren't as strong.

What Is Anemia? Anemia, which literally means "without blood," is a deficiency of red blood cells and/or hemoglobin. This results in a reduced ability of blood to transfer oxygen to the tissues. Hemoglobin (the oxygen-carrying protein in the red blood cells) has to be present to ensure adequate oxygenation of all body tissues and organs.

As far as exercising went, I continued to do cardio and plyometrics at my home and do resistance training with Avery as weight or my rubber bands. The gym was 30 minutes away and with nursing every couple of hours (from the time the baby starts to feed); I was unable to get to the gym in the evenings when my husband got home from work.

Once she turned six months, however, I was able to take her to the nursery at the gym during the day. I was so excited to be able to get back into the gym and workout that I didn't know what to do with myself. My nutritional habits were getting back on track and I was feeling much better overall.

Then I discovered some gold fish in Avery's baby carrier. I had peeked in on Avery a few times and had seen little girls playing with her, and realized that she was their little baby doll and they were trying to feed her. So being the protective parent that I am, I stopped going to the gym and opted to continue my at-home-workouts until she was big enough to hold her own in the nursery.

Luckily in the time being, a new gym opened within ten minutes of my home. I had envisioned myself competing again by this point in my post pregnancy life and frustration as well as depression; anxiety and a swarm of other emotions were beginning to take over my life.

I had visited my doctor because I was feeling quite lethargic and couldn't figure out why. I thought that I might still be anemic as I had run out of iron pills, but all of the tests came back negative. Her suggestion to me would be a wake-up call. She said that I was probably depressed because my body was used to working out two to three times a day and eating a different way.

Click Image To Enlarge.
I Needed A Wake-Up Call.

I knew that this was a possibility, but I wasn't willing to let it continue if that was the case. I had done everything in my power to give my baby the best start to life, protected her as best I could, spent every waking moment making sure she was reaching her developmental milestones through practice and repetition, but what I was neglecting was myself, and how could I give 100% of me to anyone if I wasn't 100% of me?

I started going to the gym on a daily basis, and even got up to run in the mornings or did a second session at night after Avery went to bed. I did my detox diet that had previously worked for me. I tried three times before my hormones seemed to respond. I finally began to see results, both physically and emotionally.

Click Image To Enlarge.
I Finally Began To See Results.

I decided to hire a personal trainer to take my training to the next level. I continued to lift four days a week and do plyometrics twice a week; however, now I had someone to push me through my plyometrics training sessions.

I felt like I was part of an athletic team again and I was lovin' it! I also began lifting heavier now that I had a spotter. My strength increased drastically and I was able to do more push-ups than ever before.

What I did notice was lacking was my tumbling. Although I hadn't been a gymnast in 17 years, I never really lost my ability to tumble.

Now that I've not tumbled at all in two years, my tumbling power has decreased tremendously. I'm guessing because my core strength is a lot weaker than it has ever been.

Twelve weeks out from my first competition back I started to prepare my routine, costume and ordered a swimsuit. I was so excited about competing again, even though I was not 100% ready.

I set a goal for myself to have a routine prepared by the Pittsburgh show (May 28th), so no matter what I looked like, I was going. Since I was in competition mode, I decided to go to the Universe Show (June 24th) three weeks later as well.

As I previously stated, my tumbling was not up to par and my core strength was lacking, so my routine was not as strong as it had been previous to my pregnancy. Although I love to dance, my dance choreography is almost non-existent, so needless to say, my entire routine was pieced together as well as possible for the Pittsburgh show.

There were six competitors and I was just hoping to have the best show that I could. My mother, brother, husband, daughter and two friends from college came to watch me. It was wonderful to have such great support! What I noticed about myself prior to this competition was that it felt surreal and I wasn't going out there to win, I was just going out there to compete.

I ended up falling on my back handspring back tuck combo in the beginning of the show, but finished up strong. When the bikini round came, I was actually trying to act like I had confidence. I knew that I didn't belong up on that stage. I wasn't "feeling it" at all.

I guess I pulled some poise from somewhere because I placed 3rd in the bikini round and 4th in the fitness round and 4th overall out of six competitors. I was proud of myself for sticking to my goal, but at the same time I was disappointed in myself for not being 100% prepared.

Click Image To Enlarge.
I Pulled Some Poise From Somewhere.

What made it all worth it to me was seeing my 22 month old out in the crowd cheering for me, and waving and blowing kisses to me. And when I finally got to see her, she said, "yeah, mommy" and clapped.

I really liked my Wiz theme and the music was awesome, so before the Universe show, I enlisted in the help of a friend of mine that does dance choreography. Most of my routine was changed and there were stunts that I could not perform at 100%, but the challenge of working hard to learn the routine was fun for me.

Click Image To Enlarge.
The Challenge Was Fun For Me.

Again I went into the Universe competition disappointed that I was not at 100%; but proud that I had dedicated my life to my 23 month old, but still had the courage to take on the challenge of competing under unfavorable circumstances.

I will have to say that this is the first time I've been away from my family since Avery was born, so that was difficult, but very much needed. So often we don't appreciate what we have until it's gone or we're away from the situation. I did have the support of my trainer and his girlfriend as well as my roommates, so that was nice.

With that said, I was very nervous that I was going to forget my new routine. Then to top it off, we had to learn an opening number routine for the show. Man was I thrown for a loop as it was not listed in our schedule of events for the weekend. Yikes!!!

Surprisingly enough, I nailed the opening number routine and I made it through my fitness routine. I'm assuming from repetition practice, because when I stepped off of the stage, I felt like a deer caught in headlights. After reviewing the routine on videotape, I really didn't think that it went as bad as I felt it had.

However, my scores were quite low and one of the judges commented that I needed to stop thinking about what came next in the routine. Oops, I guess the "deer caught in headlights" expression did come across a bit. Nonetheless I was proud of myself for accomplishing a goal. 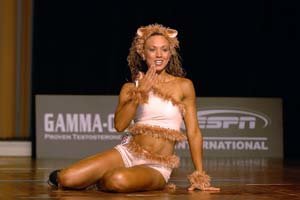 Now I have to work hard to get to 100% competition shape and go out on stage with confidence and the attitude that I am going to win. There is nothing better than achieving a goal that you have worked so hard to achieve!

Learn how to succeed in fitness, how to get started and more!