Whatever sport you take part in, it's wise to remember certain basic principles when devising a training program ...

If it is possible to identify which of the body's energy systems contributes to a particular type of sporting performance, then it is relatively easily to train specifically. With some sports, say the marathon or 100 m dash, this isn't a problem.

But with many others, it is not too easy to determine what percentage of the energy is being derived from which metabolic pathway. Alpine skiing is one such sport, and it may be for this reason that skiers so often ignore the specificity principle, especially in their off-snow training.

Is It An 'Explosive' Sport?

Alpine skiing consists of four disciplines. There are the 'technical' events of the slalom and giant slalom, and the 'speed' events of the downhill and super giant slalom. Many people think of alpine skiing as an anaerobic exercise because it appears to be an "explosive" sport, with its rapid movements and repeated maximal contractions.

However, alpine skiing is extremely deceptive, and biomechanical analysis has shown that it is not actually an explosive sport at all, although, confusingly, this does not mean it is not an anaerobic sport.

Alpine skiers demonstrate great strength when performing isometric and slow muscle concentric contractions. When performing high-speed contractions, skiers have not done as well as power athletes such as sprinters and jumpers. This type of strength is probably a specific adaptation to skiing and not a result of off-snow weight training.

Muscle-activity patterns in the slalom and giant slalom events have been found to be similar. Agonistic and antagonistic muscles frequently contract at the same time, a condition known as the "quasistatic" component of skiing. It is likely that in the speed events where there are fewer turns executed over a longer period of time than in the technical events, the quasistatic component will be even greater.

Thus, given that skiing consists of a series of turns controlled by either very slow or isometric muscle contractions over a relatively long period of time (at least for an anaerobic exercise), it is not surprising that most skiers have more than 50 percent slow-twitch fibres.

What this implies is that, even in the longer speed events, a greater contribution needs to come from anaerobic rather than aerobic mechanism. Quite simply, blood flow to the working muscle is compromised during static contractions and oxygen uptake is reduced. The fact that high results are achieved by the same skier in both speed and technical disciplines provides ample anecdotal evidence that similar physiological bases are required for all alpine skiing.

It's Not An Aerobic Sport

Recent research contradicts much of the older literature on alpine skiing, which claims it demands a high aerobic as well as anaerobic power. One reason why older studies now appear flawed is that they often relied on recorded heart data to estimate the aerobic contribution. What they failed to consider was the influence of psychic factors.

For instance, you only have to stand at the top of a black run to experience an increase in heart rate, let alone ski down it!

Measurements show that elite skiers' aerobic power, though higher than in the general population, is not that impressive. Members of the Italian national ski team were found to have a mean maximal aerobic power of only 52.4 ml.kg-1.min-1.

Some alpine skiers have moderately high VO2 max figures but that is probably a result of their non-specific ski training rather than because it is a requirement of their sport. Perhaps more importantly, one study, which measured physiological changes following a totally specific 3-month slalom training, found no significant change in aerobic power. However, anaerobic power improved significantly.

Why The Home-Based Brits Lose Out

Current thinking indicates that all elite alpine skiers possess a high anaerobic power and need only a moderate aerobic power. It has been calculated that 40 percent of the energy in slalom and giant slalom skiing is derived aerobically, with 20 percent coming from the ATP-PC system and 40 percent from the lactic acid system. The speed events, given that they last longer, may have a greater contribution from the aerobic system, but this is only an assumption. 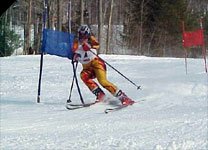 Confidently identifying the physiological requirements for the speed events is impossible, because of the scarcity of any published data. What is clear, however, is that the only way to train effectively for any of the alpine disciplines is to train as much as possible on snow - which rules out any chance of Britain producing a truly world-class skier unless they spend their lives abroad.

Earlier recommendations that running, cycling or other endurance sports are beneficial now seem out-of-date, even though many skiers, misguidedly, still follow such off-snow training habits.

It has been shown that specific slalom training has no significant effect on VO2 max. Therefore, it seems clear that a general aerobic conditioning training program for alpine skiers is a waste of time and of no benefit to racing performance. The only possible benefit of training the aerobic system would be that a more efficient system may permit a more rapid diffusion of lactate into the blood, and so allow quicker recovery from repeated bouts of anaerobic exercise.

This is irrelevant provided sufficient recovery time is allowed between exercise bouts. Most skiers have ample opportunity to recover, simply because of the time it takes to get back up the mountain between runs.

If a skier insists that a weight-training program is beneficial, the weights should be slow concentric and eccentric movements, with the emphasis on the eccentric movements. However, the muscle activation patterns found in slalom skiing show that normal weight training will not replicate these movements, so the only training effect will be to become good at lifting weights, not skiing.

The message is clear: if you want to be a really top alpine skier, move to a mountainous country with lot of year-round snow.