Until Joe Weider took the reins, bodybuilding was an obscure hardgainer of a sport. In the wake of his passing, we should all celebrate his profound influence on physical culture. 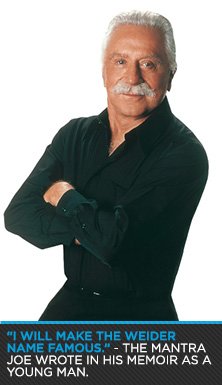 Joe Weider was born in Montreal, Quebec, to Jewish parents who had emigrated from Poland. He grew up small and physically weak, making him an easy target for bullies in his rough neighborhood. He had only a grade-school education because his family could not afford to put him through high school. At age 12, he began working 10 hours per day delivering fruit and vegetables by wagon—which he pulled himself, of course.

Despite his isolation and the poor economic situation he faced on a daily basis, Weider had immense expectations for himself. His mantra as a young man, he wrote in his memoir Brothers in Iron, was "I will make the Weider name famous." His fortune was out there waiting for him; he just had to seize the opportunity and grab it.

After he was turned down by the wrestling team at the Montreal YMHA, Weider bought a copy of the Milo Barbell Company's Strength magazine for a penny at a local newsstand.

Joe became fascinated with strength training and muscular size. He decided to take matters into his own hands. He fashioned a rudimentary barbell out of an axle and two flywheels he scavenged from a rail yard and began training with them. By age 17, he was strong and proficient enough to participate in his first weightlifting competition and earned a national ranking.

Weider both intuitively and empirically grasped the potential health benefits of structured exercise. The young lifter began coaching others on the merits of strength training. His reputation as a teacher grew along with his knowledge base. The scrappy 21-year-old made the decision to use publishing to help as many like-minded people as he could.

Your Physique and Beyond ///

Joe banged out the first edition of Your Physique magazine on a rented typewriter on his mother's dining room table. It was published in August, 1940, and made an immediate hit. It cost 75 cents for six bimonthly issues. The magazine gave a growing contingent of weightlifting devotees the information and inspiration necessary to achieve long-term muscular progress. Weider wasted no time using the profit from his initial issues to start the mail-order Weider Barbell Company in 1942, offering a catalog of weight sets and vitamins.

Your Physique quickly gained momentum, leading a generation of fitness enthusiasts to follow their dreams just has as Weider had. Decades before the so-called "Golden Age of Bodybuilding," Joe and his brother Ben Weider helped push the sport toward legitimacy when they created what they called the International Federation of Bodybuilders (IFBB) in 1946, on the same night the two staged the first Mr. Canada contest in Montreal. Three years later, the "international" part of the federation's name came to fruition when they staged the first IFBB Mr. America contest.

Weider was a visionary thinker whose prophetic words peppered the pages of his flagship publication. In 1950, his now-legendary "10 Predictions about Bodybuilding" appeared in Your Physique, among which were these two timeless gems:


As it became world's premier muscle magazine, Your Physique helped to ensure that Weider's predictions rang true. In 1953, its name changed to Muscle Builder, which it remained until becoming Muscle & Fitness in 1980. Not long after the initial name-change, Weider began to broaden his scope, launching the upstart Jem magazine to compete with Hugh Hefner's Playboy Magazine in the late 1950s.

Throughout the ensuing decades, Weider published other magazines about cooking, sports, healthy living, and even how to stay fit during pregnancy. But his first love, and first priority, was always the iron.

Weider played a profound role in all that we do in the name of fitness. From the foods we eat, to the supplements we consume, to the training methods we utilize, even to the way we think about what it means to be "healthy," his ideas and publications often started the conversation and gave it a platform to develop.

As both a hardcore bodybuilding fan and a bodybuilder himself, Joe had a deep empathy and understanding of what bodybuilders needed to become inspired and informed. His magazines and books clearly reflected this commitment to the muscle-building cause. However, he didn't believe this valuable activity should belong simply to bodybuilders. 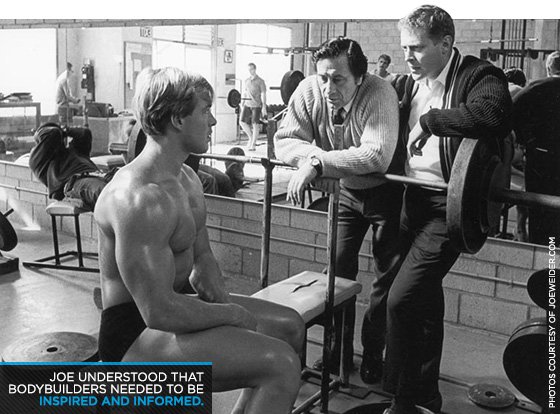 Weider knew how general fitness protocols and healthy living could extend life and boost human productivity and potential worldwide. Many of his magazine articles portrayed bodybuilding as a cure-all that could benefit anyone, from housewives to movie stars. He transformed what was once a fringe activity into something that could be embraced by anyone.

No longer were bodybuilders a species of knuckle-dragging dungeon dwellers living only for their next workout. Through Weider publications, bodybuilding became fashionable, a fitness boom was created, and gym culture grew exponentially.

Every gym owner and gym-goer owes something to Joe Weider. The sport of competitive bodybuilding owes him the biggest debt of gratitude. He did more to publicize the efforts of its bodybuilding champions than any other industry player. He guided the IFBB to its present level of success; his impact was immeasurable because it's still growing. 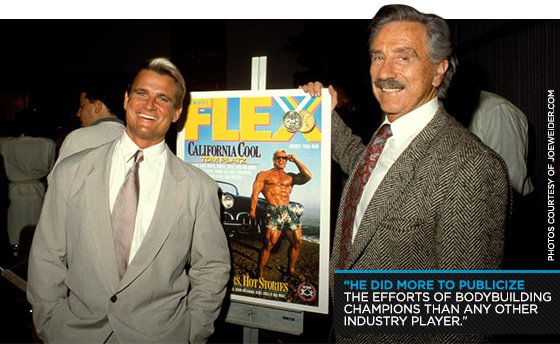 Weider and his IFBB launched the biggest pro bodybuilding spectacle of them all, the Mr. Olympia, in 1965, and he helped launch the career of a humble (in experience only) Austrian named Arnold Schwarzenegger. These were Joe's two most recognizable triumphs, but they barely scratch the surface of his contributions to the iron game. His love affair with bodybuilding lasted all the way to the end, and his name will live on at the Olympia long after his passing.

Without Weider, all of our lives would be weaker and poorer in many ways. Rest in peace, Joe Weider. We at Bodybuilding.com salute you, the man who started it all.