Watch as John Berry coaches his training partner, Barry Snell, on how to pack on 6-8 weeks worth of lean muscle mass using only AST supplements and plenty of hardcore training! THIS WEEK: Baz's first training session. Check it out!

This season, watch John Berry and Barry Snell (a.k.a. "Baz") take on a series of supplement challenges, starting off with the AST line of supplements. 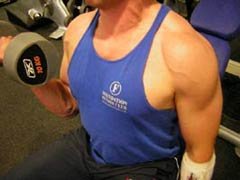 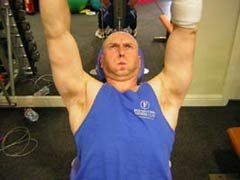 Click Image To Enlarge.
Watch John And Barry Break A Sweat In The Gym!

This week, John and Baz hit the gym for Baz's first hardcore training session. So, what are you waiting for - click the play button now to watch!

This week I feel like I'm getting to grips with the diet better, don't dread taking the pills so much as last week, but let's be honest - I was not sure what the stuff was going to change in me, as in my mental state or mood changes, which is something I can't allow to happen as I have a short fuse at the best of times.

The last thing I want is for my wife Melissa to have to worry about upsetting me and me going off the deep end. My one condition to this challenge and anything I do is that it mustn't cause any problems with Melissa as nothing is worth putting a strain on my marriage. 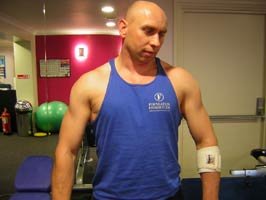 All in all, I think I'm feeling a change, I'm feeling positive about training and seeing if there is a difference, still push and pull workouts but I've managed personal best's on just about everything which is awesome, apart from arms as I've still got this bloody biceps injury on my left arm, my physio has told me that I've torn the muscle at the base of my bicep but that its not too bad and she can help me to heal it.

So, we have done two workouts on legs which I hate training and I actually made some great lifts (over 300kg for 8-10 reps), which for me is fantastic, now whether this is to do with the AST supplements or what I don't know but it makes me feel more motivated over all which in any case is good. 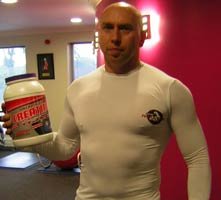 Click Image To Enlarge.
Baz Asks: Are You Taking Your Creatine?!

I'm a 26-year-old Personal Trainer & Nutritionist (isn't everyone these days?) and I live in 'sunny' England. Watch me train week-by-week on video!